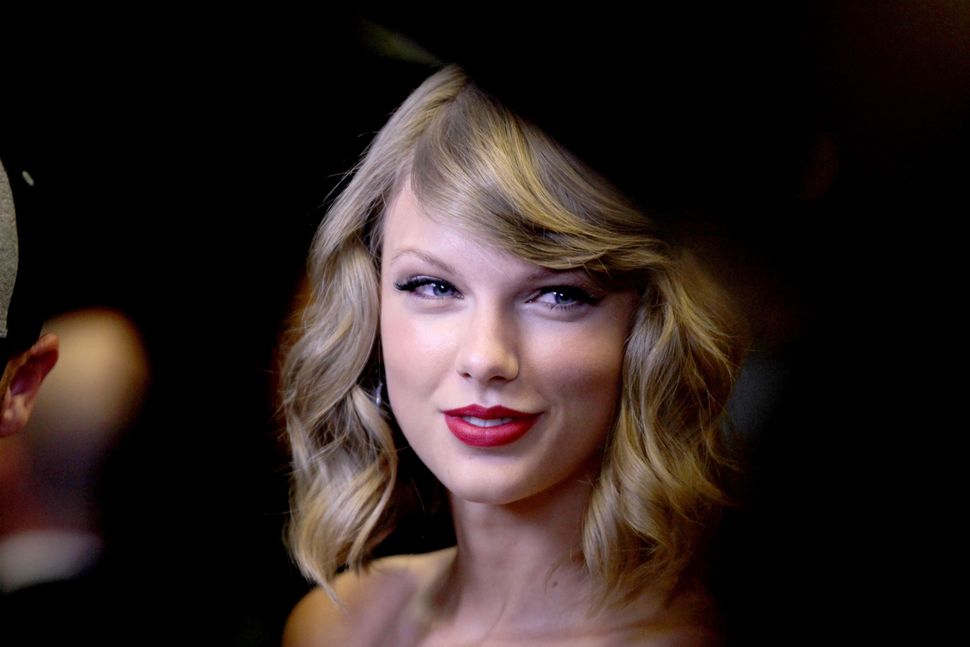 Taylor Swift, puppet of the Jews? Not quite. Image by Getty Images

Neo-Nazis across the web are livid that pop star Taylor Swift, the woman they once considered an “Aryan goddess” has endorsed two Democrats in the 2018 primaries. The Jews, they feel, are responsible for this.

As a Jewish Democrat, I feel happy to speak for my entire people when I say:

The pleasure was all ours!

Swift, a global celebrity for at least a decade, has steered clear of politics with the accuracy of a signal-seeking antenna. Despite phenomenal pressure, she declined to endorse a presidential candidate in 2016 and ignored growing fringe accusations that she is an alt-right darling who courts white supremacists.

One of our favorite Schmooze headlines of all time. Of all time!

It’s hard to lose the things we love.

“Like most other white women, she’s Jew controlled garbage,” lamented a poster beginning a thread about Swift’s endorsement on 4Chan. “Finally the jew brainwashing is complete,” sighed another. Posters generally seemed to agree that Swift’s sea-change was a result of a decision made on high by Jewish media members and agents, while another helpfully linked to a file titled, simply, “F**kJews.”

As a Jewish media member — do you really think if we controlled Taylor Swift we would have let her date Jake Gyllenhaal?!

Like most online anti-Semitism, it’s impossible to tell the true magnitude or significance of the Jews-control-Taylor-Swift-debacle. Ditto those who have gathered online to (cue: Taylor Swift’s “Wildest Dreams”) fantasize that a tween-age-plus army of Swifties may be coming to eradicate Nazis for once and for all.

“If any group of people can combat the hateful brigading of the alt-right, it’s her absolute die-hard fans. These teenage girls were born and bred in comment sections, have unlimited data plans, and ZERO f***s to give,” one popular Reddit comment reads.

“I have worked at Taylor Swift concerts. Let me tell you, those girls will overwhelm the nazis with the sheer power of their numbers and the power of their screams,” another responded.

Listen — it’s not that we think women and girls who came of age listening to “Speak Now” don’t have the fortitude and moral fiber of an Alan Turing or a Winston Churchill. It’s just that, well, call us sentimental, but Nazism is something American society should be stamping out at the highest levels, not something we should be waiting for young civilians to save us from.

But if young women do have to make a list of Nazis to fight, rest assured — they have a blank space, baby, and they’ll write your name.