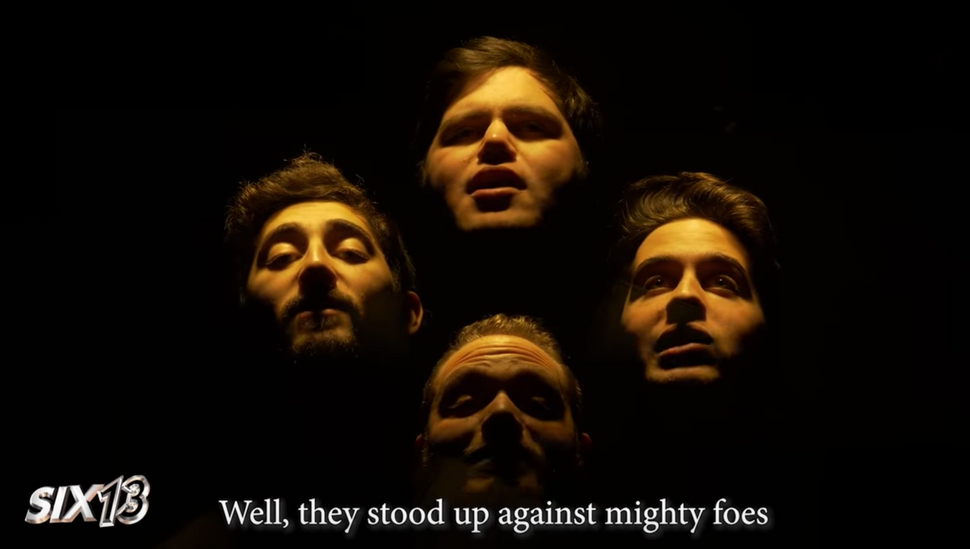 From the ‘Bohemian Chanukah’ video Image by YouTube Screenshot (Six13)

Is this the real life? Or is this just fantasy? Before our very eyes, a Jewish a cappella group has produced the Hanukkah parody song and video to leave all others in the dust.

Move over, Maccabeats, “Bohemian Chanukah,” a parody of Queen’s “Bohemian Rhapsody,” is the musical equivalent of being wrapped in a plush throw blanked and spoon-fed warmed latkes by the friendly ghost of Flavius Josephus.

Six13, an all-male Jewish a cappella group, released their seasonal parody spectacular on social media on Tuesday. Normally, every word in that sentence (with the possible exception of “Jewish”) would make us roll our eyes. But this song succeeds because it embraces the greasy, cheesy tradition of Hanukkah music, parody songs, and a cappella.

It somewhat massacres the story of Hanukkah (the assailants were the Seleucids, a more specific group than the “Greeks;” the Maccabees left a more complex legacy that just “freedom,” etc,) and dives nose-first into the schmaltzy references Hanukkah allows — food, lights, dreidels, bubbies — but hey, it’s a parody song, not a journal article. The grating perfection of the precisely pitched male pop voices are a bearable stand in for Freddie Mercury’s perfect sound, and the “Night at the Opera” sendup early in the video is as on-point as a perfectly spun dreidel.

We miss the presence of…what do you call them? Ah yes — women — in this video. Other than that, it’s pretty perfect.