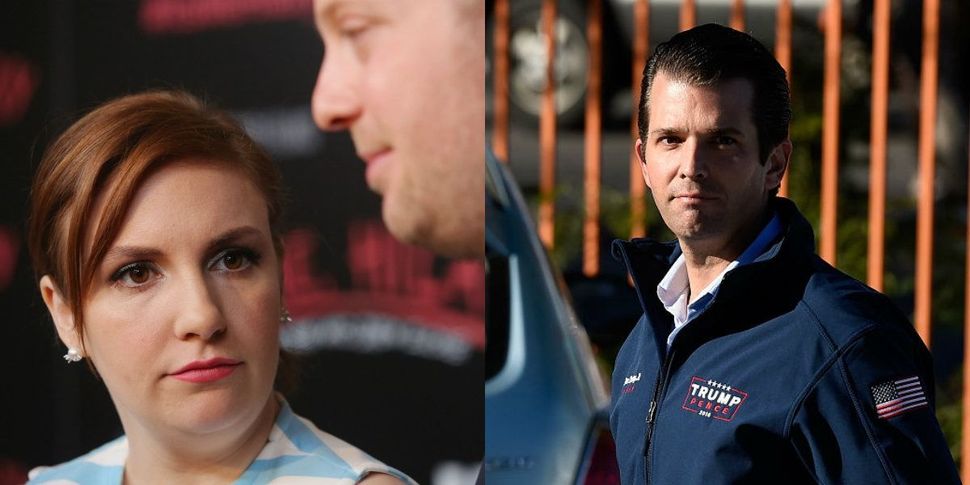 Donald Trump, Jr.: A tireless defender of assault victims, and a crusader for believing all women, and all victims.

On Wednesday, First Son Donald Trump, Jr. made an uncharacteristic move — retweeting a post by Chuck Ross slamming Lena Dunham for “ly[ing] to protect a rapist.” Dunham admitted on Wednesday that she pretended to have “insider knowledge” about an accused rapist, her friend and employee Murray Miller, to protect him from a rape accusation by actress Aurora Perrineau.

So Lena Dunham lied to protect a rapist https://t.co/g5ZMy6Aruy

Miller was never found guilty of rape, or even charged with it — the Los Angeles district attorney declined to file charges in 2017, citing the statue of limitations and “inconsistencies” in Perrineau’s report.

Trump Jr.’s choice to label an accused rapist a “rapist” is a major departure from his typical behavior around #MeToo issues. In October 2018, in the shadow of the assault allegations by Christine Blasey Ford against then Supreme Court nominee Brett Kavanaugh, Trump, Jr. told the Daily Mail that the allegations made him most scared for his sons. He also called the Senate hearing concerning the Kavanaugh allegations “nonsense games.”

For Trump, Jr., it seems, the accused are innocent until proven guilty… unless Lena Dunham is involved.