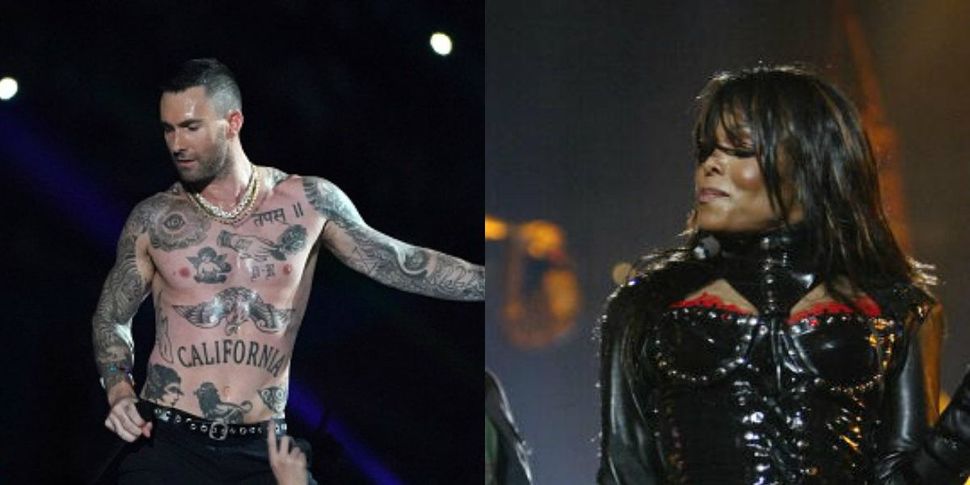 Adam Levine performed shirtless during the halftime show at the Super Bowl on Sunday night, prompting this Jewish publication to ask — how many rabbis are going to use this image as the introductory anecdote for their sermons this Shabbat?

During their performance, the frontman of pop band Maroon Five peeled off his skintight tanktop and tossed it into the crowd, revealing an abdomen so inked up it looks like a wall parents let their kids draw before a kitchen remodel.

It’s salient that Levine intentionally removed his shirt, because when singer Janet Jackson experienced an infamous “wardrobe malfunction” at the 2004 Super Bowl LVIII — fellow performer Justin Timberlake pulled at her shirt, which burst open, revealing one of her breasts — Jackson was blacklisted.

CBS was fined $550,000 by the FCC, and Jackson’s music was kept off radio stations. Then-CBS head Les Moonves (who has since lost his career over decades of sexual misconduct allegations)personally tried to destroy Jackson. In the years that followed her performance, the singer split her time between being treated like a laughingstock and being lectured for immorality.

Janet Jackson’s career was irreparably damaged by a flash of her nipple on television. Adam Levine stripped his shirt off in the same segment to demonstrate his sexual status. Why are women punished for actions for which men are rewarded? Why are women’s nipples taboos that should remain carefully concealed while men’s nipples can be proudly displayed on TV? If Adam Levine is such a nice Jewish boy, why did he accept an invitation to perform at an event many of his contemporaries chose to forgo because of the NFL’s shameful treatment of civil protest? Why did Maroon Five never make another album like Songs About Jane?

You betcha. Image by screenshot

The Forward, of course, investigates.

The double-standard for male and female modesty here is monumental. The opportunity to talk about nipples is surprisingly enormous. And setting aside the unique hellscape of social expectations in which female nipples are treated like national emergencies, imagine if a female performer had stripped off any item of clothing at the Super Bowl. There is no public female sexual act that will be seen as massively weighted, by some as whorish, by others as bad for feminism. When a man, like Levine, takes off his clothes there is simply nothing of social significance to say unless its “good lord those tattoos must have hurt.”

Also — Levine took his shirt off during the song “Moves Like Jagger.” There really is no amount of confident public nudity that will make him as cool as Mick Jagger. It seems like a losing battle for any mortal to compete.

Let’s see what the internet had to say:

#SuperBowl Janet Jackson’s reaction when Adam Levine showed off his nipples during the halftime show pic.twitter.com/rCCnpC0XpL

Janet Jackson showed a nipple and the country went nuts. She had to move to Bahrain for 10 years. #AdamLevine just went full on shirtless. Guess he’s gonna have to move to Riyadh #superbowl https://t.co/9Dzjj1T3tO

YOU’RE TELLING ME JAMET JACKSON CANT SHOW ONE NIPPLE BUT ADAM LEVINE CAN BE SHIRTLESS?

YOU’RE TELLING ME JAMET JACKSON CANT SHOW ONE NIPPLE BUT ADAM LEVINE CAN BE SHIRTLESS?

Jenny Singer is the deputy life/features editor for the Forward. You can reach her at Sin[email protected] or on Twitter @jeanvaljenny