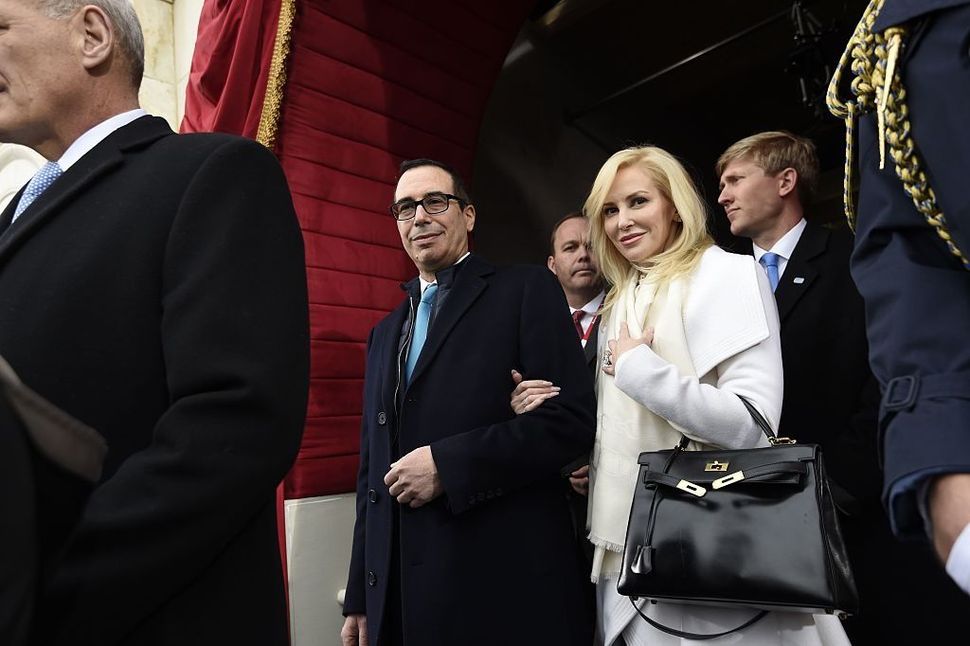 Louise Linton (right, with husband Steve Mnuchin) will debut as a writer-director Image by Getty Images

Louise Linton, the eminently photographable actress who is married to US Secretary of Treasury Steven Mnuchin, has created her first feature film as both a writer and director.

Not just any film. It’s a comic romp called “Me, You, Madness” about a robber in Malibu who realizes he’s stealing from a serial killer. “Gossip Girl” actor Ed Westwick, who has been accused of rape by two women and of sexual assault by a third, co-stars in “Me, You, Madness.”

You know how these things are — Oxford comma haters are bound to be furious.

Linton, whose decade-plus screen career has included roles on CSI and in Heineken ads, has enjoyed infamy during the Trump administration as a sort of Hermes-draped, latter day Marie Antoinette. She sparked outrage and later apologized when, after identifying the designer labels on her outfit in an Instagram post, she responded to a critic with the acidic claim that she and Mnuchin do more for the economy than others, both in terms of taxes and “self sacrifice” for the country.

? @EdWestwick stars in Me, You, Madness, directed by Louise Linton. Here is your first look at this new comedy via @DEADLINE: https://t.co/wFFkitAcRl pic.twitter.com/n1HgJjzDjy

The two were also memorably pictured posing with a sheet of freshly printed dollar bills at the Bureau of Engraving and Printing in Washington, DC.

As for Westwick, whom Linton called her “co-pilot” in the making of her film, Los Angeles prosecutors declined to bring sexual assault charges against the 31-year-old actor in July 2018, citing a lack of evidence. In November 2017, Kristina Cohen wrote on Facebook that she was raped by Westwick when she fell asleep after a dinner with the actor and her boyfriend. Actress Aurélie Wynn followed Cohen, also saying that Westwick raped her. A third woman accused Westwick of sexual assault, while others have come forward with reports of inappropriate touching. Westwick has denied all reports.

Only in this corrupt Admin it’s ‘Normal’ for The Treasury Secretary’s wife Louise Linton to play with money at the Bureau of Engraving and Printing while dressed like Cat Woman pic.twitter.com/E2cj9nYJgI

“Me, You, Madness” has no release date but has shared first images from the movie with Deadline. Linton, who has never before written or directed a movie, has looked for buyers for the dark-comedy at the Sundance Film Festival and continues to shop the movie to distributors.