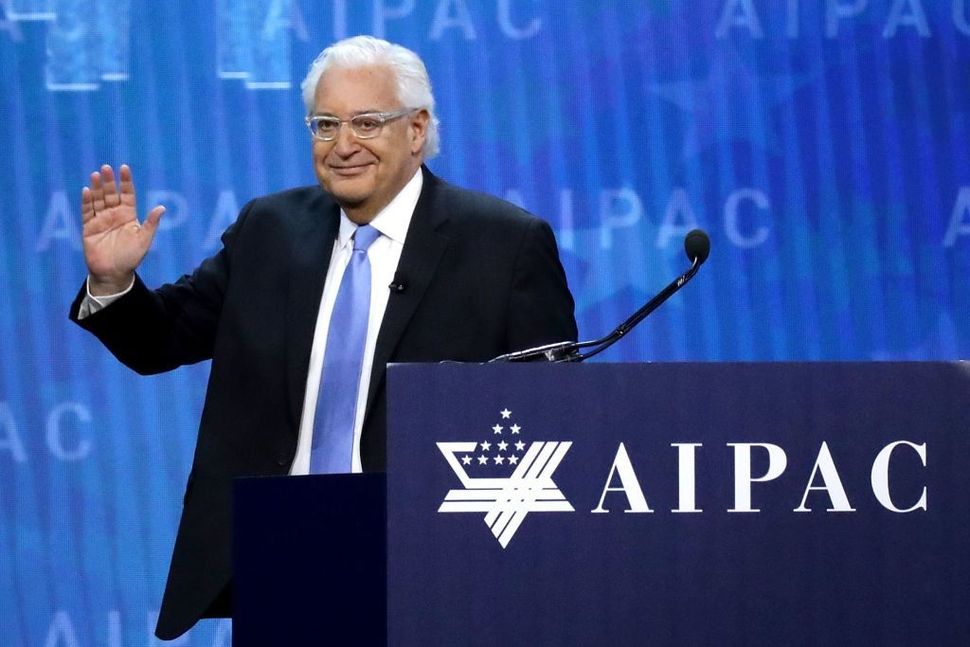 US Ambassador to Israel David Friedman, in his normal costume Image by gettyimages

David Friedman holds one of the most significant positions in American diplomacy. As the US ambassador to Israel, the Orthodox Jewish bankruptcy lawyer, and former president of the Trump Organization, influences policy decisions in one of the most volatile parts of the world.

Friedman has courted controversy — comparing supporters of the liberal pro-Israel organization JStreet to kapos during the Trump campaign, and encouraging rabbis to ask God to help Trump seek reelection in 2020.

And on Sunday, he donned a rubber mask, polyester suit, and a gold chain by which his wife dragged him around the grounds of his palatial estate, as their employees looked on.

Hosted a #GameofThrones finale party for all the guards at our home last night. A great way to show our appreciation for all they do. Enjoyed playing the dragon, enjoyed even more removing the sweltering mask! pic.twitter.com/vcbc3WGW6M

It was a celebration for the finale of the HBO series “Game of Thrones.” Friedman posted pictures on social media of the party at his sweeping Israel residence to thank the guards who keep his home safe. He included an image of guests enjoying the controversial final episode of the eighth season of the television show, as well as an image of himself in full dragon costume, a gold lead snaking around his neck to wrap several times around the wrist of his wife, Tammy Deborah Sand, also in costume.

Not that there’s anything wrong with that.

It’s a tale as old as time, or, at least, as old as foreign diplomacy — man meets wife, man becomes lawyer, man receives shiva call from Donald Trump after his father’s death, man explores sexuality through fantasy-creature kink-play at a party in the Holy Land funded by US tax dollars.

It’s unusual to see the popular pet-play fetish — in which a submissive partner is dominated by an “owner” — demonstrated with such pride, and the Friedmans deserve commendation for their positive, game approach to unique sexual preferences.

We’re joking! Ambassador and Mrs. Friedmans’ sexual proclivities are, of course, their own to define — though with photos like these, it’s hard not to speculate. It’s just as important — though less titillating — to note that the Friedmans hosted an Iftar dinner at their home this week for Ramadan, inviting Jews, Muslims, and Christians to dine together in a gesture of unity.

Just know, Ambassador Friedman, that whatever exhibitions you decide to make to the world, God is surely on your side. This time, at least.