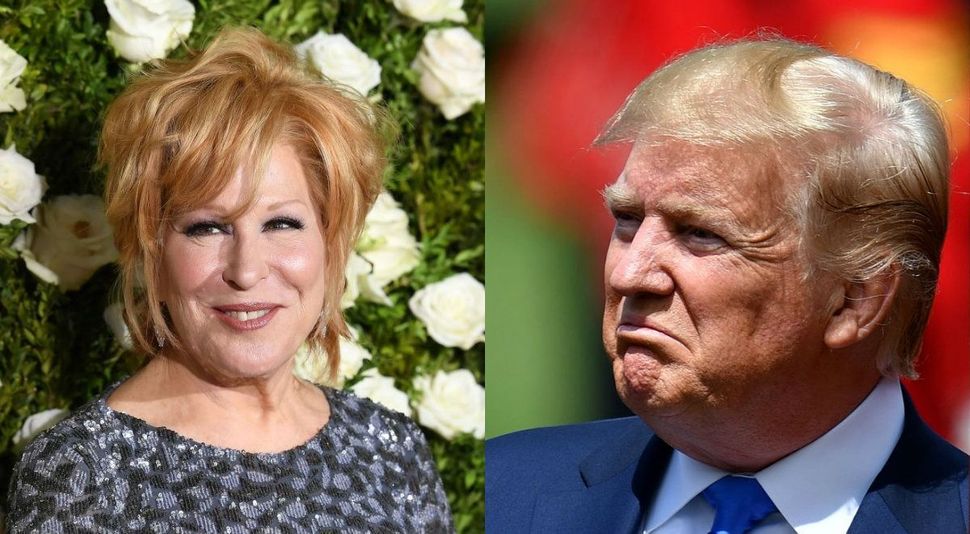 “Be courteous to all, but intimate with few,” George Washington said. Taking a slightly different tack, President Donald Trump tweeted on Tuesday to admonish performer Bette Midler for attributing a fake quote to the president.

“Washed up psycho @BetteMidler was forced to apologize for a statement she attributed to me that turned out to be totally fabricated by her in order to make ‘your great president’ look really bad,” Trump tweeted. “She got caught, just like the Fake News Media gets caught. A sick scammer!”

Midler apologized on Monday for having tweeted a faux-Trump quote calling Republicans “the dumbest group of voters” which has been debunked. “Don’t know how I missed it, but it sounds SO much like him that I believed it was true!” she wrote, acknowledging the mistake with a link to an article explaining that the quote is fake.

However, the President’s ire was only expressed on Twitter the next day, after Midler had tweeted about him once again. “Trump said he was greeted by thousands in the UK, but they were actually thousands of protesters. How does he always hear the opposite of the truth?” Midler wrote, adding, “Donald, if you’re reading this you SHOULD NOT slam your dick in a door!”

Midler rounded out the day by breaking down Trump’s sartorial choices. “PROPORTION FAIL!!” she wrote, on an image of the President dressed to meet the Queen. “Fire the tailor!!”

This isn’t the first public altercation between the two iconic blonde tweeters — in 2012, Trump tweeted, “@Bette_Midler talks about my hair but I’m not allowed to talk about her ugly face or body — so I won’t. Is this a double standard?”

Midler seemed to take the President’s insults in stride on Tuesday night, taking to Twitter to thank her followers for seeing her through her brush with power. “As a newly washed up psycho, I am very grateful for your thoughts and prayers,” she wrote.