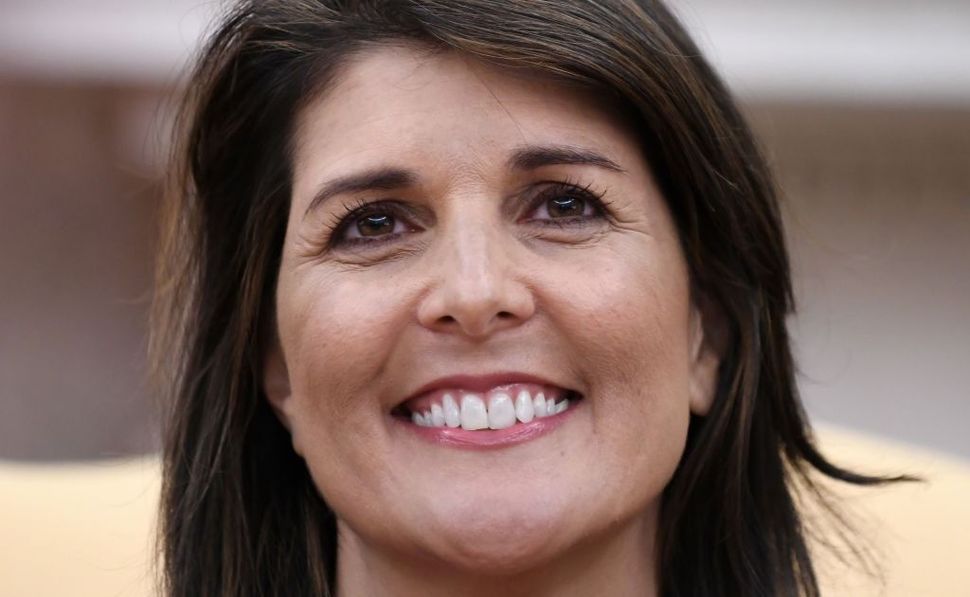 Every visit to Israel is a seduction.

Israel plies you with food, dazzles you, and overheats you. It leaves you sweaty and dehydrated and wondering if you should pick up and move. Coolheaded and rational people can be found 48 hours into a trip to Israel flushed and rambling about home. Rabbis, tour guides, and Birthright leaders know this. And so, it appears, does Nikki Haley.

Haley, the Republican former governor who served as ambassador to the United Nations until 2018, was the keynote speaker this week at a conference in Israel thrown by Republican mega-donors Sheldon and Miriam Adelson. The casino magnate and doctor couple, who were the largest individual donors to the Trump campaign, own Israeli paper Israel Hayom (Israel Today), a free daily. But the rumored 2024 presidential hopeful managed to use the trip to further brand herself as a friend to Israel, even beyond the stages billionaires and heads of state provided.

By the time Haley touched down at Ben Gurion, she had already been immortalized in Israel — on the walls of Mahane Yehuda, Jerusalem’s famous open-air market, where an artist depicted her staring, like Athena-like, into the future. She smiled in photos with Prime Minister Benjamin Netanyahu, who called her a “tremendous support.” She placed both palms in supplication on the ancient stones of the Western Wall. She posed with special-needs soldiers and Orthodox women. She glowed as Miriam Adelson told the crowd, “In Hollywood, Wonder Woman is Gal Gadot; in the real world, it is Nikki Haley.”

Think remarking on the fashion choices of a female diplomat is sexist? Then you don’t understand Nikki Haley, the shrewdest dresser on the world stage. The then-ambassador to the UN strode permanently into Israel-loving hearts and minds in 2017 when she told crowds at the AIPAC conference, “Everyone at the UN is afraid to talk to me,” adding, “I wear heels, but it’s not a fashion statement. It’s because if I see something wrong, I’m gonna kick ‘em every single time.”

True to her word (and her brand), Haley wore high-heels in every appearance during the trip, her first since resigning her post at the UN in 2018. When she sat down on stage, Adelson’s first question for her was about her heels — Haley quickly pivoted to politics.

She also exclusively wore white, evoking at once the women’s suffrage movement and the Israeli flag, while accommodating hours spent posing for photos in the desert sun. In swirling lace and three-quarter-length sleeves at the Western Wall she looked like a Sabbath bride, then lunched with the Prime Minister in pants and a structured white net blazer that covered her wrists while still looking chic. For her speaking appearance at the Israel Hayom forum she wore a shimmering ivory and gold collared dress so perfect for the occasion that might as well have played a choral version of “Jerusalem, City Of Gold” every time she breathed. ““Wow, she really understands tzniess,” an Orthodox woman breathed to Ha’aretz reporter Anshel Pfeffer, praising Haley’s sense of religious modesty. The former ambassador complimented the white-gold dress with her highest, thickest heel of the visit.

In her interview with Adelson, her language appealed to Israel’s right wing with the same canny as her clothing. She referred to Iran’s “tentacles.” She accused the Arab world of “babysitting” the Palestinians. She invoked the glory of 1967, complemented the Adelsons, and called the Trump administration “courageous.”

“The air in Jerusalem brings clarity,” Haley told Adelson, when asked about plans to run for president in 2024. But, she added, “2024 is a long way away.”

Well. It takes longer to get places if you’re walking in heels. But Haley has clearly begun the trek.