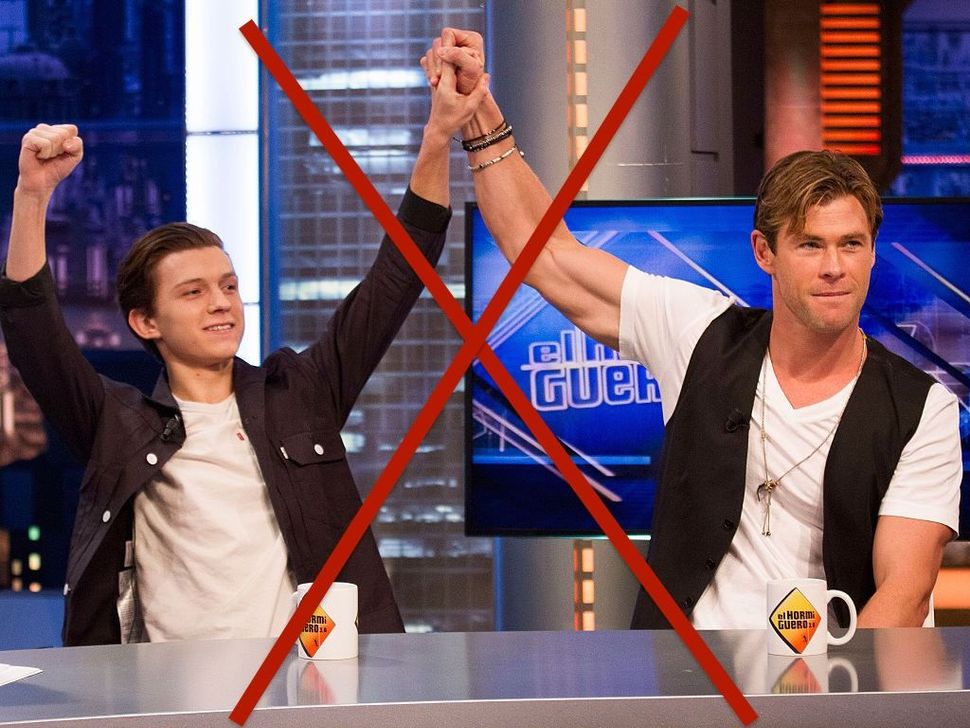 It’s a break-up for Marvel Cinema and Sony Pictures, which collaborated to bring Spider-Man into the Avengers films. Image by Getty/Forward Montage

The partnership between Marvel, a subsidiary of Disney, and Sony Pictures has collapsed, Deadline reports.

That relationship was responsible for the appearance of Tom Holland’s fresh-faced, ludicrously charming child Spider-Man in a handful of Marvel Universe movies, starting with 2016’s “Captain America: Civil War,” all the way to the latest Holland “Spider-Man” standalone flick, “Spider-Man: Far From Home.” That movie hit the big one-billion at the box office, thanks to the collaboration. This week, that most recent “Spider-Man” became the all time highest grossing film for Sony Pictures. With the Disney-Sony split, Holland’s Spider-Man will no longer appear in films taking place in the Marvel universe. Avengers…assemble?

What’s Jewish about this? Amy Pascal is the Jewish woman producer behind the recent “Spider” successes, and Sony Pictures chief and tribe member Tom Rothman negotiated this deal. Spider-Man, of course, was created by the brilliant Stan Lee.

So long and thanks for all the arachnids. The two “Spider-Man” movies currently in development will be Sony projects, without Marvel’s input, although Marvel still owns all merchandising rights for “Spider-Man.”

Why veer from a great collaboration? Well, this way Sony will see every dollar that the films lure into the “Spider-Man” web. But Spidey is a Marvel stalwart, and every recent Marvel offering seemed to be shaping itself around his growth. He was supposed to slip on Tony Stark’s purple lenses, leading the Avengers in the inventor’s stead, after all. Now how will Peter Parker put out hits on guys who flirt with his crush?

Mike Fleming at Deadline offers this assessment of why Sony would break from Marvel, which created the super-lucrative “Spider-Man” we know today: “Essentially Sony has made a decision that is similar to saying, thank you, but we think we can win the championship without Michael Jordan.”

Dang. When massive studios and conglomerates clash, it’s hard to see who the bad guys and good guys are — mostly there are just rich guys. Here’s to Sony not messing up the good thing they have going on.