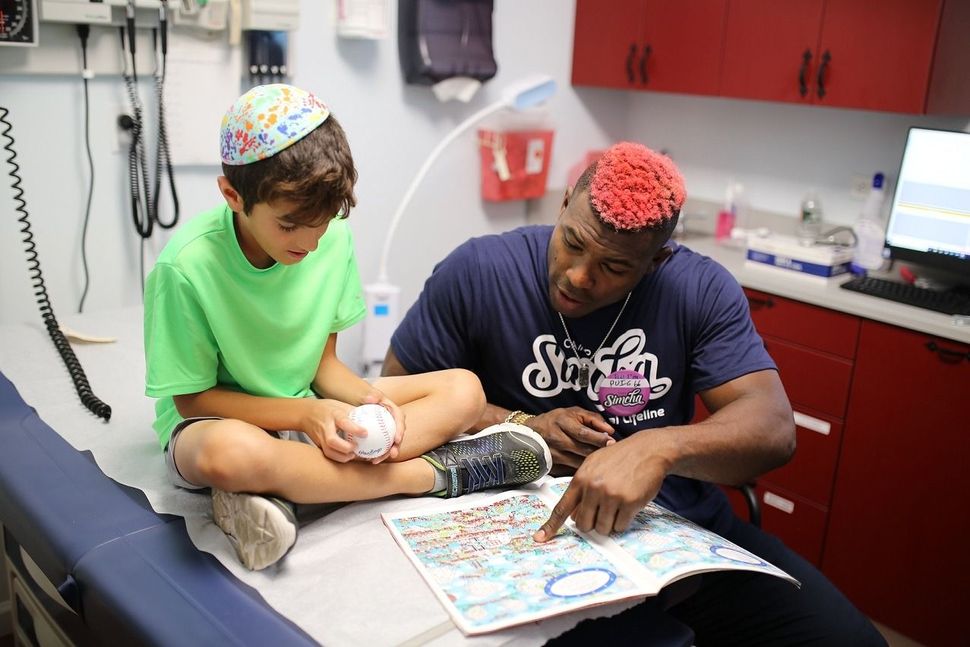 Image by Courtesy of Chai Lifeline

Have You Seen This Mensch?

Yasiel Puig, an outfielder for the Cleveland Indians, spent the day on Monday visiting Camp Simcha, an Orthodox Jewish summer camp dedicated to helping children and teens who deal with cancer and blood disorders. It was Puig’s first day off from work in three weeks.

In order to keep his visit a surprise, Puig donned a tiger mask upon landing after at the camp’s scenic campus in the Catskills, after a 45-minute helicopter flight. It was only when he was in front of the children that he revealed his identity. The camp, which is run tuition-free through the Jewish non-profit Chai Lifeline, reportedly went wild.

The Cuban-American baseball player isn’t Jewish, but he found a connection to yiddishkeit in Irv Bauman, whom he met while attending a Lakers basketball game in 2013. (Bauman, it appears, is a rather chutzpadik sports fan.) It was Bauman’s grandson, a volunteer at the camp, who suggested that his grandfather call in a favor and bring Puig to the camp to cheer up the campers.

On the list of of activities he participated in during his four-hour visit: a tour of the grounds, crowd surfing during a dance session, candle making, and reading a book with a child who was staying in the camp infirmary. 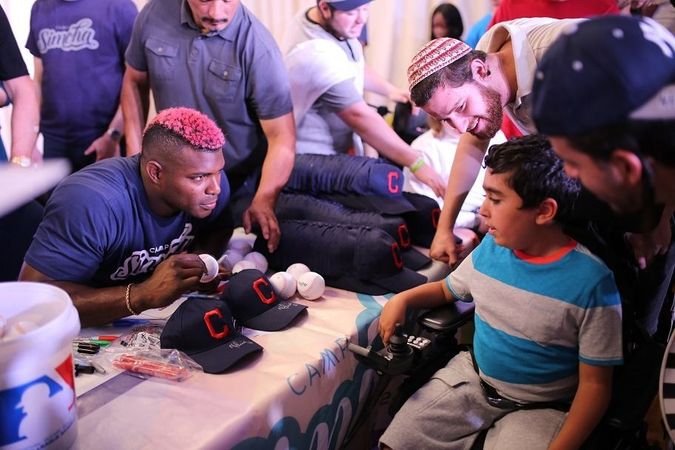 Image by Courtesy of Chai Lifeline

“[A boy] started talking about baseball, saying ‘I love the way you play. Keep going, fight,” Puig told MLB.com about the experience. “I said, ‘Oh, I’m the one coming here to tell you to keep fighting and everything will be fine, and you’re the one telling me to keep going, fight and work hard.’ And that made my day.”

Founded in 2001 by Chai Lifeline, Camp Simcha offers Jewish activities and kosher food to Jewish campers, though exceptions are sometimes made to enroll non-Jewish children. The camp’s goal is to “bring childhood back to children who lost it when they were diagnosed.” Campers at Camp Simcha, which means “Camp Joy,” are accommodated at any stage of treatment or recovery.

Thank You @yasielpuig for dancing with us ?

The Major League player took to social media to describe how the excursion changed him.

“Today was one of the best days of my life,” he tweeted. “I want to thank so many people, starting with all of my new friends at Camp Simcha. Thank you for welcoming me and giving me your smiles today.”

He concluded the tweet with this: “You are my inspiration and when I do good things on the field, I will do it for you.”

Today was one of the best days of my life. I want to thank so many people, starting with all of my new friends at @campsimcha. Thank you for welcoming me and giving me your smiles today. You are my inspiration and when I do good things on the field I will do it for you. pic.twitter.com/uSSrYX2ibW

Lasting impressions were made all around.

“Yasiel Puig is an all-star on the field, but an even bigger all-star mensch off of it,” Rabbi Simcha Scholar, the CEO of Chai Lifeline (the organization runs Camp Simcha), told the Forward about the visit. “We are grateful got his taking the time to visit our campers and providing them with memories they’ll never forget.”

Adrianna Chaviva Freedman ia a writer. You can reach her at [email protected] or on Twitter @ac_freedman