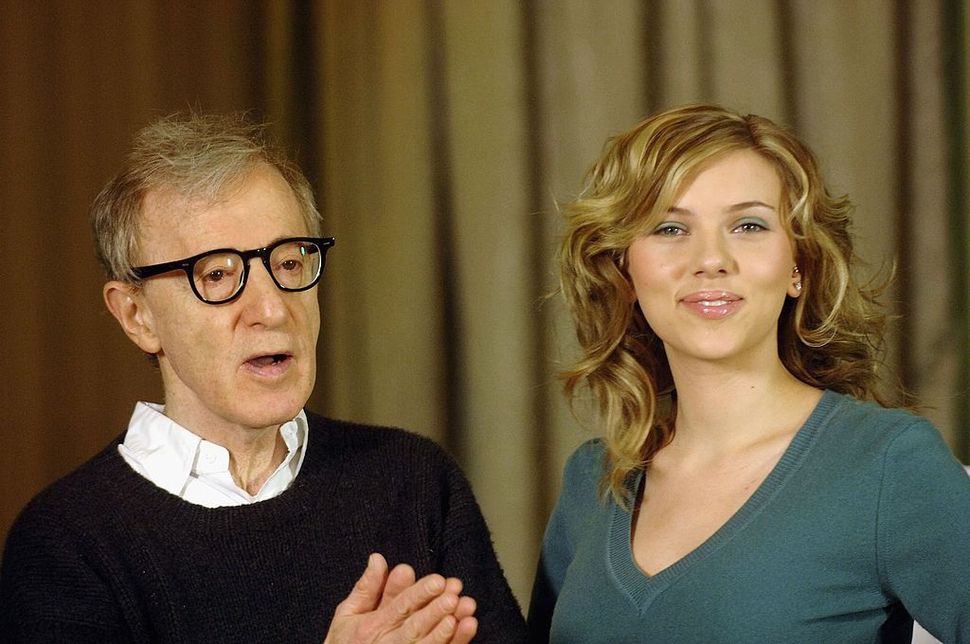 Scarlett Johansson and Woody Allen, in 2005 Image by Getty Images

This article has been updated to incorporate Dylan Farrow’s response to Johansson’s comments.

Dylan Farrow responded to comments made by actress Scarlett Johansson in support of Woody Allen. Farrow, who is Allen’s daughter, says that Allen sexually abused her when she was a child, a claim she has upheld since 1992. Allen has denied the allegations.

In a profile in the Hollywood Reporter on Wednesday, Johansson, who has starred in three of Allen’s movies, promoted his innocence.

“How do I feel about Woody Allen?” Johansson said. “I love Woody. I believe him, and I would work with him anytime.”

She went on: “I see Woody whenever I can, and I have had a lot of conversations with him about it. I have been very direct with him, and he’s very direct with me. He maintains his innocence, and I believe him.”

On Thursday, Farrow responded sarcastically to a tweet from the Los Angeles Times about the interview, writing, “Because if we’ve learned anything from the past two years it’s that you definitely should believe male predators who ‘maintain their innocence’ without question.” She added, “Scarlett has a long way to go in understanding the issue she claims to champion.”

Though Farrow’s abuse accusations have always been public, Allen’s career continued to soar between 1992 and 2017, when the revelations of the Me Too movement caused a major social reconsideration of powerful men who have faced serious sexual misconduct allegations. In December 2018, another woman spoke out about having a sexual relationship with Allen when she was a teenager.

While other actors like Timothee Chalamet and Greta Gerwig have distanced themselves from Allen, even apologizing for working with him and donating their salaries to funds for sexual abuse victims, Johansson has never erred in her support of Allen. Johansson’s comments are especially noteworthy given that she has been a high profile member of the Hollywood branch of the Me Too movement — Time’s Up — and used her platform to call out hypocrisy in the movement, namely actor-director James Franco, who has been accused of sexual misconduct.

Sexual abuse is a crime that happens behind doors. Nobody knows if Woody Allen abused Dylan Farrow except Woody Allen and Dylan Farrow. Perhaps for Allen, who has been somewhat marginalized over the last two years, Johansson’s words will be a balm. But think of Farrow, who has been marginalized since she first spoke up in 1992. One of the most influential women in the world just de facto announced that Farrow is a liar.

Looks like Scarlett Johansson’s version of “me too” means finding common ground with another somewhat-disliked millionaire celebrity and defending him at the peril of an alleged victim.