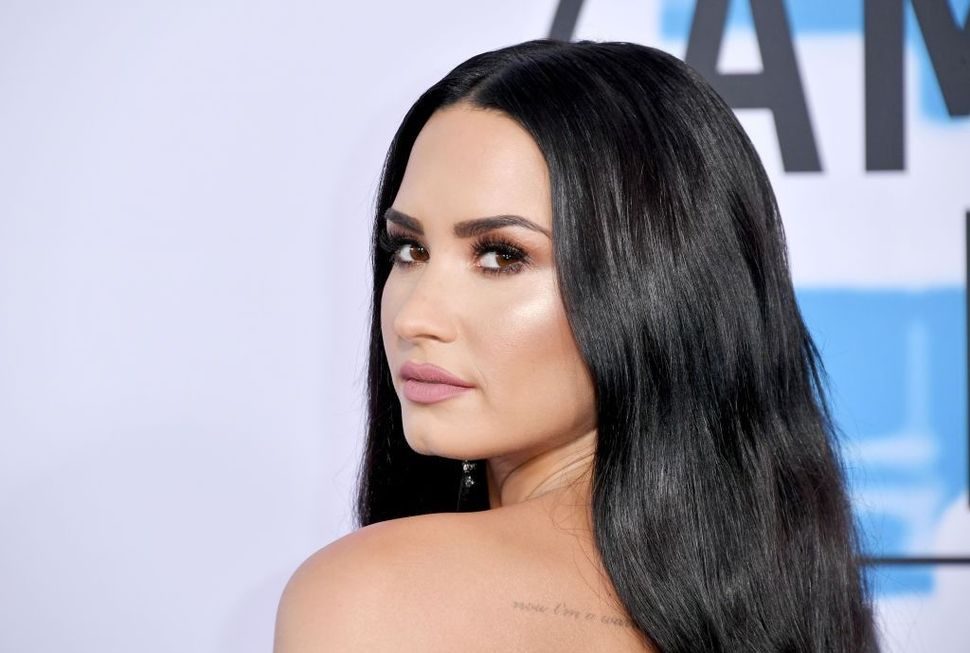 “Confident” singer Demi Lovato visited the Western Wall in Jerusalem this week. The lovable diva, whose powerful vocals and public vulnerability have made her a particularly endearing star, is not in Israel for a tour or performance. She’s just a tourist. Or maybe, a pilgrim.

Lovato, 27, may have just wanted an iced Aroma and great hummus. But it’s likely that this trip had a spiritual dimension for her — Lovato has Mexican and European heritage, but in 2012 she did genealogy research and found out more about her heritage on her father’s side. “I’m a little bit Jewish!” she announced in 2015, sharing that her father’s family history had always been opaque because of his schizophrenia. He had told Lovato that she was Italian and French. But after doing her own research, Lovato discovered her Jewish and Portuguese heritage.

“It’s a weird situation!” she said, and Jews and Jew-ish people around the world nodded in solidarity.

Lovato, according to the Israeli news site Walla, is traveling in Israel with her mother Dianna De La Garza. The two were spotted by paparazzi during a visit to the Kotel on Thursday. Then on Sunday, Walla reported that Lovato spent time at Jerusalem’s Shalva Center, a major non-profit that serves differently abled Israelis. During the visit, Lovato reportedly participated in a craft workshop, watched toddlers float in a therapy pool, played in the Autism garden, and showed off her sign language skills.

The Shalva Band, the center’s in-home performance group, went viral last year with their sterling performance of “Here Comes The Sun.” Lovato greeted each member of the group with a hug or handshake, and joined them in song. “My dream came true!” shouted Anaelle Khalifa, one of the group’s vocalists, upon seeing Lovato.

Demi Lovato meeting Shalva, a musical band of eight musicians, all of them live with some degree of disability. The band were contestants in Rising Star to the Eurovision 2019 in Israel. pic.twitter.com/gMre3DolWh

Lovato is set to star in Netflix’s “Eurovision,” a Rachel McAdams-Will Ferrell vehicle about the bonkers TV song competition, and some are speculating that Lovato’s time in the Holy Land is related to that project. It’s possible, though no other “Eurovision” stars have been spotted in Israel and the movie will film in Europe. Is there a chance that Lovato is researching to play an Israeli pop star? Would Lovato’s portrayal of a Netta-style Israeli diva cause the spontaneous arrival of the Messiah? These are the questions Jews around the world must consider.

Oh, Demi! To paraphrase your own lyrics, “Tell us you love us.”