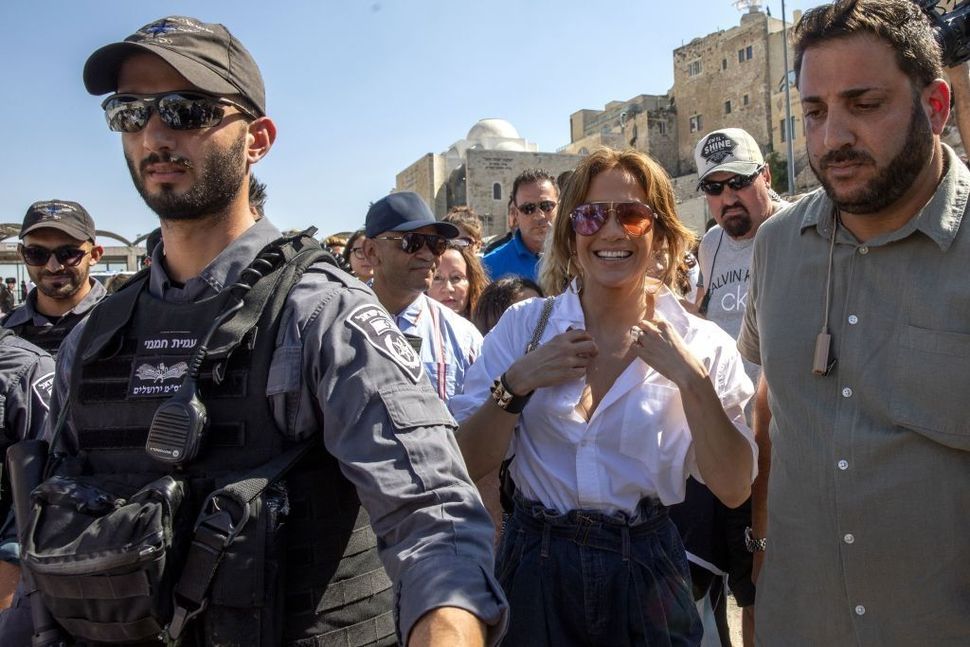 Roger Waters wants to stop you from performing in Israel. Lana Del Rey and Lorde cancelled their planned tour stops after hearing out BDS activists. On the other hand, after their Tel Aviv performance, Jon Bon Jovi told his Jewish bandmate David Bryan that his father would have been proud.

And floating above it all are Jennifer Lopez and Alex Rodriguez, who are currently exploring the land of Israel with the careless swagger the Maccabees must have when they at last overthrew Antiochus.

50,000 Israelis, according to the singer, gathered in HaYarkon Park to watch the 50-year-old chart topper perform, in just one of dozens of stops on her international “It’s My Party” tour.

The outrageously famous couple, engaged as of March, touched down in Israel this week and immediately took to the country not, it seems, to spite BDS pressure, but, apparently, without any awareness that their visit could be construed as more controversial than a visit to Tokyo or Rome.

It is very possible that J-Lo and A-Rod live in a world where there is no Israeli-Palestinian conflict. Apparently carefree and unconcerned with having landed in the most politically contentious place on the face of the earth, they arrived in the country with their four children in tow (each have two children from previous marriages,) as well as a one hundred-person coterie of dancers, tech people, and other members of Lopez’s tour.

“There was nothing that was going to stop us from being in Israel,” Lopez’s manager Benny Medina told Channel 12 News in Israel. “It’s really simple: Tel Aviv and Israel deserve Jennifer Lopez, and Jennifer Lopez deserves Israel.”

J-Lo and A-Rod in Je-ru — it’s a pairing that has launched a thousand camera flashes. Let us follow this blissfully too-famous-to-worry-about-public-opinion couple as they sweat attractively through summer in the Holy Land:

Jerusalem, you are unforgettable. What a perfect finale to our first trip to this beautiful land.

Lopez, in a kind of reimagined Princess Leia slave outfit, pumps up the crowd in Tel Aviv:

Rodriguez tries out local transportation at the Tel Aviv beach boardwalk with the confidence of a motorcycle gang leader:

The couple tries a considerably older form of local transportation:

The Via Dolorosa! The camels! The Holy Sepulchre! The Kotel!

Reconnecting with faith and family at the Via Dolorosa and the church of the holy sepulcher … ?? #family #love #itsmypartytour SWIPE to see some beautiful pictures of our family outing.

With the energy of a shopping mall Ahava salesman and the Kiruv-spirit of a Chabad youth, Rodriguez sounds off on Israel as a vacation destination:

What an amazing time we are having on my first trip to Israel! The people have been wonderful and have such energy. I will definitely be back and recommend visiting this incredible country! ❤️ . How many of you have been to Israel and how was your experience? ??

Look — Israel is about to have elections, and Prime Minister is a wide open field. If this is Lopez, Rodriguez, or any of their four children’s opening bid in their run, it’s a good one.