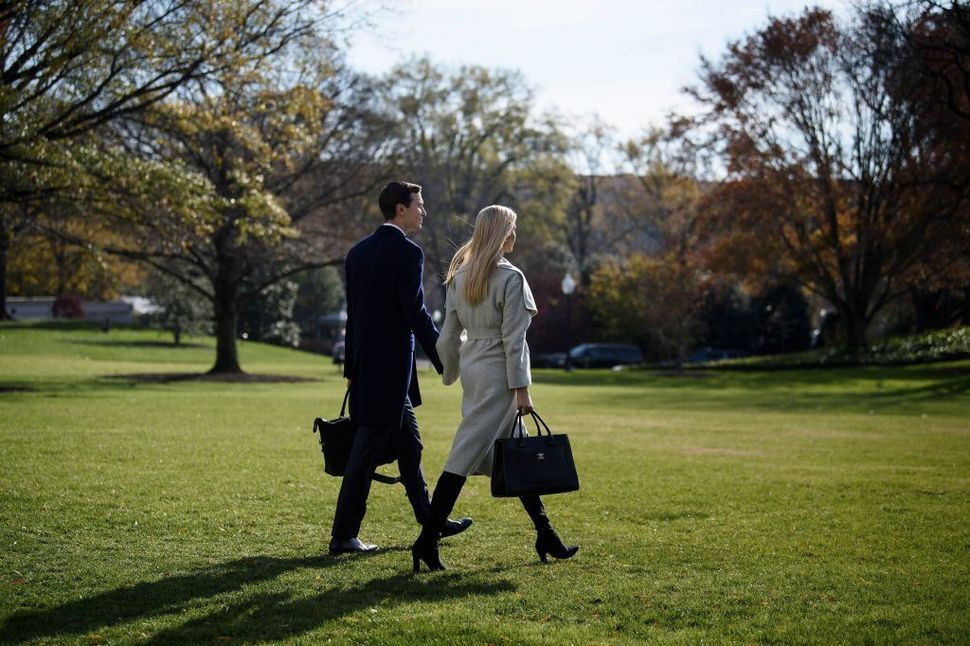 Ivanka Trump and her husband Jared Kushner. Image by Getty

It’s the kind of aspirational snapshot common on Instagram: a casually perfect-looking young mother poses in a casually perfect-looking living room. Her accessories: a tuxedoed husband and three charmingly oblivious children. She’s dressed to the nines, clearly ready to head out for the night, but the (carefully controlled) mess of Legos on her tasteful coffee table communicates that she’s also a dedicated and authentic mother. With a quirky caption, the humble brag is complete.

The Force is strong in my family. ⭐️ pic.twitter.com/oT0jFfy5Lb

But this isn’t just any mother. It’s Ivanka Trump, who, as her father’s advisor, enjoys political influence unprecedented for a child of a modern president — even though her resume includes zero prior political work. Her dapper husband Jared Kusher doesn’t just wear a tux well: he’s also responsible for major swaths of American foreign policy, despite similar lack of experience and the fact that almost no Americans have heard him speak out loud. Admittedly, the duo is photogenic.

“The force is strong in my family,” Trump captioned the snap, which shows one of her children dressed as a Stormtrooper, a villainous soldier from the Star Wars universe. It’s no crime to use your family to project a more likable image on social media — or if it is, most of us are guilty. But Trump’s attempts to portray her family as the softer, chicly relatable face of her father’s administration does open her up for criticism (and might make you wonder if the women working for Ivanka Trump ever enjoy picture-perfect nights out with their families.)

And this post backfired in an especially dramatic manner when Star Wars royalty stepped in.

Luke Skywalker himself — or, at least, the actor who plays him, Mark Hamill — retweeted the photo with the caption “You misspelled ‘fraud.’” He ended with the hashtag #GoForceYourself.

Hamill fans and Trump critics have latched onto the now-viral hashtag. “Thoughts and prayers for Ivanka’s Twitter account,” one user wrote, while another theorized that “neither of those parents have ever stepped on a lego thanks to the nannies & maids.”

But while Hamill’s post has garnered over 100,000 retweets, not all of them are singing the actor’s praises. Many have chastised him for appearing to target a child. In an apparent attempt to clarify his position, two days after the original post Hamill boosted a tweet by another user who had remarked “Forget the parents… this kid rocks.”

This isn’t the first time Hamill, a vocal critic of the Trump administration, has used his iconic roles to mock the first family. In 2017, he recorded Trump’s New Year’s tweets in the voice of the Joker, whom he portrays in many of the Batman animated series movies. These days plenty of fictional folks are trying their hands at being real-life heroes, but dang! We wish this strange confluence of government and scifi was happening a long time ago in a galaxy far far away.

Irene Connelly is an intern at the Forward. You can contact her at connelly@forward.com