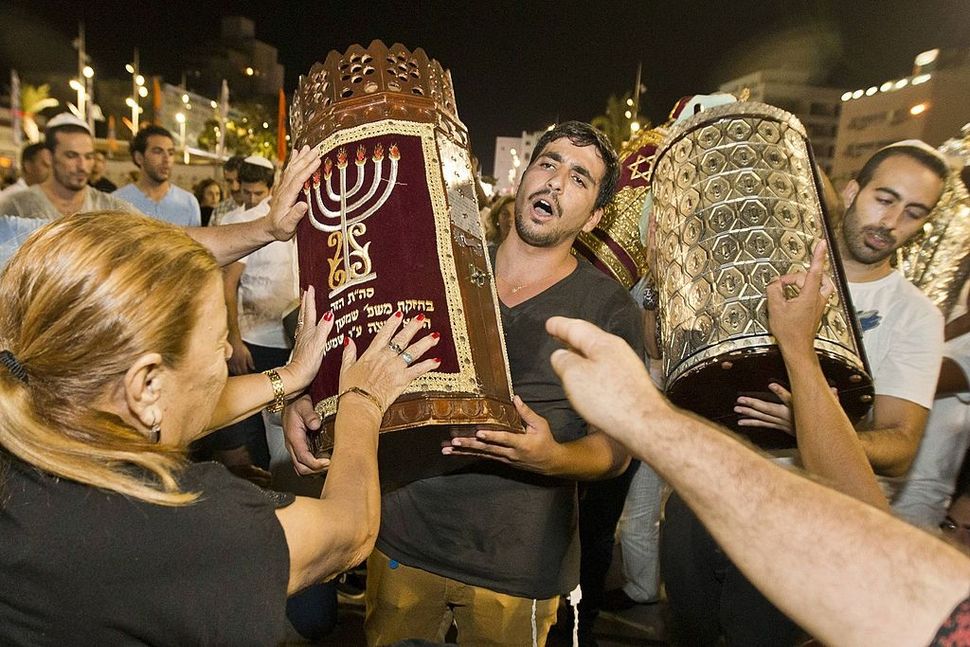 The morning sky is pitch black, the children’s pencils are no longer sharp and their backpacks are bursting with shards of construction paper, the heat hasn’t been turned on yet, and every surface in your kitchen is unpleasantly sticky with honey residue.

Well put on a chunky sweater and take a swig of Manischewitz, bitch, because the Jewish party cycle ain’t over ‘til it’s over.

The time has come, once again, for the Jewish people to party.

No, it’s not Passover, that week-long feast of freedom and resveratrol. It’s not Purim, the drunkard’s gory masquerade. It’s not even the sleeper-favorite all-night cheese rager, Shavuot.

It’s Simchat Torah, a take-to-the-streets dance party, a meeting of the biggest book-club gathering of all time. On Simchat Torah, Jews mark the end of the annual reading of the five books of the Torah, celebrating by immediately propping the Torah open and starting to read it again. If your neighborhood mom group finished “Where The Crawdads Sing” and then each downed a bottle of Pinot and started dancing to “Space Jam” in the cul-de-sac, that wouldn’t be the half of this.

If you’re confused about what Jewish holiday it is today, you’re doing it right — this part of the Jewish calendar is as messy yet rewarding as digging for chapstick at the bottom of a purse. We’re at the tail end of the high holiday season, which means we’ve made it through (depending on your practices): Slichot, two days of Rosh Hashanah, the Fast of Gedaliah, Yom Kippur, seven days of Sukkot, and Shmini Atzeret.

Even if you dipped in and out of those holiday practices, chances are you heard at least one of the 54 Torah portions that were read this year. On Simchat Torah, which literally means “Rejoicing In The Torah,” congregations around the world start with uproariously praising God then engaging in that most beloved of Jewish activities: dancing in a circle.

Unlike the classic grape-vining spiral, these hakafot (circle dances) are done while holding the Torah, with maximum hooting and hollering. There are seven hakafot, but they’re meant to feel endless, jubilating, like a manic, Jewish Time-Warp. It is not commanded, but rather a popular tradition, to be a little drunk for this.

Simchat Torah isn’t in the Torah itself — it’s mentioned under the name Shmini Atzeret in the Talmud, and it was solidified as a practice and rebranded as Simchat Torah much later. Scholars like Lesli Koppelman Ross argue that Simchat Torah became public and rowdy in response to persecution. “The impetus for the exuberant support of and adherence to Torah was provided by persecutions of the 14th century, when expulsions, blood libels and Crusades were directed against Jews who refused to forsake the text,” she writes.

Amazingly, Jews continued the practice when they could, considering how unwelcome voluble expression of fervor by a non-predominant religion tends to be. British Member of Parliament Samuel Pepys wrote this unflattering Yelp review of a Simchat Torah celebration in his neighborhood in October 1663: “But, Lord! to see the disorder, laughing, sporting, and no attention, but confusion in all their service, more like brutes than people knowing the true God, would make a man forswear ever seeing them more and indeed I never did see so much, or could have imagined there had been any religion in the whole world so absurdly performed as this.”

That’s a man who doesn’t know the joy of shuffling around in a circle.

Simchat Torah exquisitely, almost tragically expresses the longing relationship between human and divine. Without instruction from God to tether us, we throw ourselves a participation trophy party because reading week in and week out is hard. We physically cling to the Torah, our one corporeal representation of God’s word, as if it is a beloved child, or a romantic dance-partner. We make a big show of saying to our neighbors, “Hey! We know we look crazy, and we are not afraid. This is the choice we are making, to go deeper and deeper into this book.”

We invite ourselves to look away from the violence and harshness in our tradition and see only unfettered, ecstatic joy. This isn’t the Torah of spats with your neighbor or slicing open a she-goat or a foaming-at-the-mouth, genocidal god or a crooked, complain-y Jewish people with a self-control problem, we tell ourselves. This is a source of life.

The Torah is ending, and it’s also beginning again. Get out your dancing shoes.