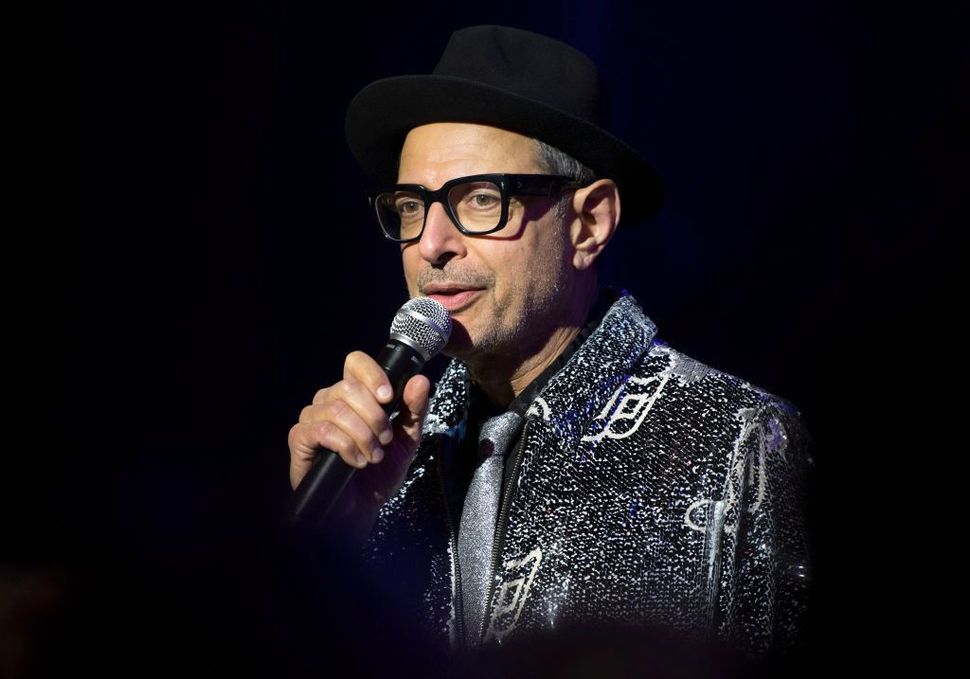 Jeff Goldblum, a man who really wants you to get out and vote. Image by Getty

For the past several months, actress Beanie Feldstein has been hunkering down with her parents and phonebanking up a storm. Songwriter Hannah Friedman has been composing ditties at the behest of the Biden campaign. “Queer Eye” star Tan France, when he’s not cyber-stalking Beanie Feldstein, has been telling everyone he knows to vote.

All three are former cast members of Saturday Night Seder, a star-studded Passover benefit produced in the early days of the pandemic, when we were all still excited about spending free time on Zoom. But last night, as part of a virtual rally for Democratic presidential candidate Joe Biden, they reunited for a panel discussion about how they’d spent their respective quarantines — and, more importantly, what they were doing to get out the vote.

“This year, I felt there was no choice but to do everything I possibly can,” Feldstein said, a statement we know is true because she voluntarily elected to spend her Monday evening on a video call with a bunch of strangers.

Hosted by Young Jewish Americans for Joe Biden, the rally followed the tried and true philosophy of throwing it all out there and seeing what sticks. By the time the panel discussion rolled around, we’d already seen campaign videos in which fun words like “kindness” and “humility” flashed across the screen, interspersed with clips of Joe Biden projecting joviality through a mask. We’d seen the aspirationally mid-century interiors of several moderately famous people’s apartments. We’d listened to serious kvetching from comedian Judy Gold (who also took advantage of the occasion to plug her new book) and light Torah study from capital-P progressive Jews Sarah Hurwitz, an Obama-era speechwriter, and Rabbi Sharon Brous.

We’d also heard from “Jurassic Park” star Jeff Goldblum, ostensibly the rally’s feature act but in fact the creator of a short and slapdash video pre-recorded in what looked like a corporate break room, during which he listed off his Jewish bona fides (he had a bar mitzvah) and the Jewish resonances of the current election season (there are currently eight days until the election, which is the same number of nights in Hanukkah). Anyone who considers themself a Jew or “a citizen of the cosmos,” he concluded, has a duty to vote for Joe Biden. QED — sort of.

The novelty of Zooming with celebrities, even if we can’t un-mute ourselves, has not totally worn off after six months of quarantine. We are pleased that so many celebrities have such a strong sense of civic duty, and genuinely impressed that Beanie Feldstein has single-handedly persuaded a least one reluctant voter to head to the polls.

But we had to wonder: Who was it for? The rally’s ostensible purpose was to generate enthusiasm around the Biden campaign, but this point, undecided voters are pretty thin on the ground — especially among the young Jewish demographic organizers targeted. Does a voter exist for whom the best means of persuasion is five minutes of Jeff Goldblum’s pre-recorded dry wit? At this late date, will anyone be swayed by the fact that Joe Biden was once really nice to Sarah Hurwitz?

We’re not sure. But next time we want to listen to an hour of ad hominem political invective and free association about the importance of voting as Jews, we’ll just call our parents.