What is ‘Nancy Meyers Week,’ and how did it create 2020’s least likely internet controversy? 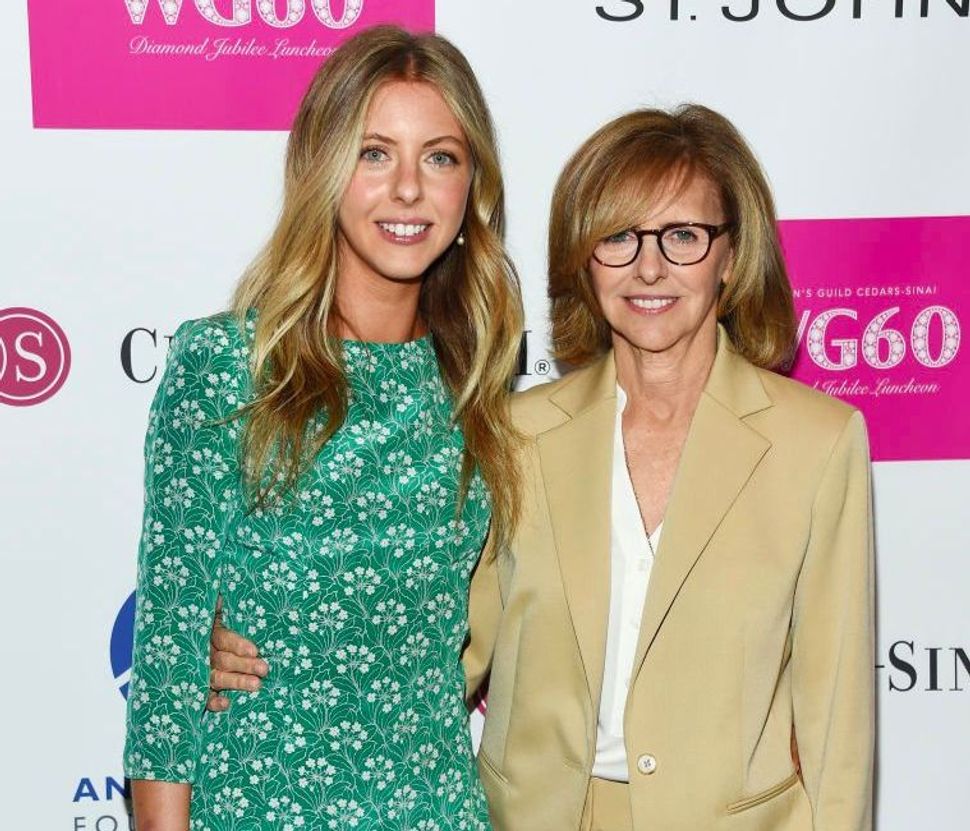 Meyers-Shyer and Meyers in 2018. Image by Getty

This week, my worst journalism stress dream came to life in the form of the now-infamous “Nancy Meyers Week.”

Conceptualized by Rachel Handler, a staff writer at New York Magazine’s arts and culture website, Vulture, “Nancy Meyers Week” was the site’s tribute to the Jewish director’s work in the form of eight (yes, eight!) glowing articles published in quick succession. Just after this delightful distraction from the coronavirus pandemic debuted, Meyers’ daughter Hallie Meyers-Shyer called out the series on Instagram, branding it a “sexist” insult to her mother’s work. Before the post went private, celebrities like Reese Witherspoon, Mindy Kaling and Chloe Fineman chimed in with approving emojis ranging from clapping hands to curled biceps.

Basically, an entire internet kerfuffle was born from one reporter’s failure to be sufficiently fawning.

For the uninitiated: Nancy Meyers is the woman behind an astonishing number of cinematic staples in the genre of “feel-good comedies about rich white people.” Her work includes “The Parent Trap,” “It’s Complicated,” “Something’s Gotta Give” and “The Holiday.” All of these gems take place in a too-good-to-be-true cinematic universe anchored by common WASP-y elements, from blonde divorcée protagonists to all-white outfits that actually work and tasteful interiors ripped from the pages of a Pottery Barn catalogue. But they’re also rife with nods to Jewish culture: neurotic husbands, mere acquaintances partaking in intimate discussions about sex, “casual” family dinners that produce multiple rounds of leftovers.

It’s that fictive world of lunchtime martinis and enormous granite countertops to which Handler paid tribute in the form of a “taxonomy” of Meyers’ films. The taxonomy awarded points to each film for common Meyers tropes like “woman weeps loudly to comic effect,” “room full of white couches” or “reference to ‘decorating the study in mushroom.’”

And it was the taxonomy to which Meyers-Shyer objected.

On Instagram, Meyers-Shyer argued that by focusing on seemingly frivolous aspects of Meyers’ films, the taxonomy reduced “a woman’s entire body of work to themes that entirely miss the point.” She also pointed out her mother’s trailblazer status when it comes to positive portrayals of professional women in mainstream film, saying that she “paved the way for stories about women defying society’s expectations.” And she accused Handler of “degrading successful women.”

redpilling myself by reading all the yas queen comments on the most deranged instagram post i have ever read in my life about @rachel_handler’s objectively GLOWING nancy meyers ranking. this is a pro-sexism account now pic.twitter.com/iegY6up8Jy

On a more personal note, she also took umbrage at Handler’s remarks on “Home Again,” a 2017 film that Meyers produced and Meyers-Shyer directed. Handler wrote that Meyers-Shyer “technically directed” the film, seemingly reserving the real credit for her mother.

“I am not for the taking simply because my parents are filmmakers,” Meyers-Shyer replied loftily.

Let’s put aside Meyers-Shyer’s apparent belief that no one should ever mention the fact that she makes films in exactly the same vein as her mother. (“Home Again” stars Reese Witherspoon as a wealthy white woman in the midst of a messy divorce who enjoys vocally weeping in her pristine kitchen.) Let’s also put aside the claim that Meyers invented feminist filmmaking. Even in the dark days of the 1980s, people were making meaningful films about women, including ones who were neither wealthy, professional, or white — think “The Color Purple” or “The Joy Luck Club.” Those issues aside, the defensive post raised an interesting question: Does Meyers-Shyer actually like her mother’s work?

Meyers’ films are completely aspirational and far from representational. But they do something notably feminist in asking us to respect, as professionals and people, women who do things like weep loudly, decorate studies in “mushroom” and divorce their husbands messily — in other words, all the stuff women are told not to do, lest they appear too girly, too frivolous, too weak. Meyers’ most significant contribution to cinema comes through characters like Elizabeth James of “The Parent Trap,” played by Natasha Richardson, who is both totally feminine and totally in control.

We should absolutely pay tribute to the transgressive nature of those choices. But to do that, we have to embrace the behavior of Meyers’ characters, from their love of white wine to their propensity to fall into pools. Retroactively pretending her protagonists spent their time uttering feminist slogans and exercising wisdom and restraint in romance does nothing but undermine the strength of Meyers’ work, and the challenge it offers to conventional depictions of “strong” women.

Meyers-Shyer’s embarrassment suggests that she doesn’t actually take her mother’s films all that seriously. Insisting that their protagonists are feminist “despite” crying too much and wearing way too many fabulous coats, she leans into precisely the stereotypes that Meyers’ films dispute.

Luckily, there’s a cure for this. We prescribe several leisurely viewings of “It’s Complicated.”

What is ‘Nancy Meyers Week,’ and how did it create 2020’s least likely internet controversy?