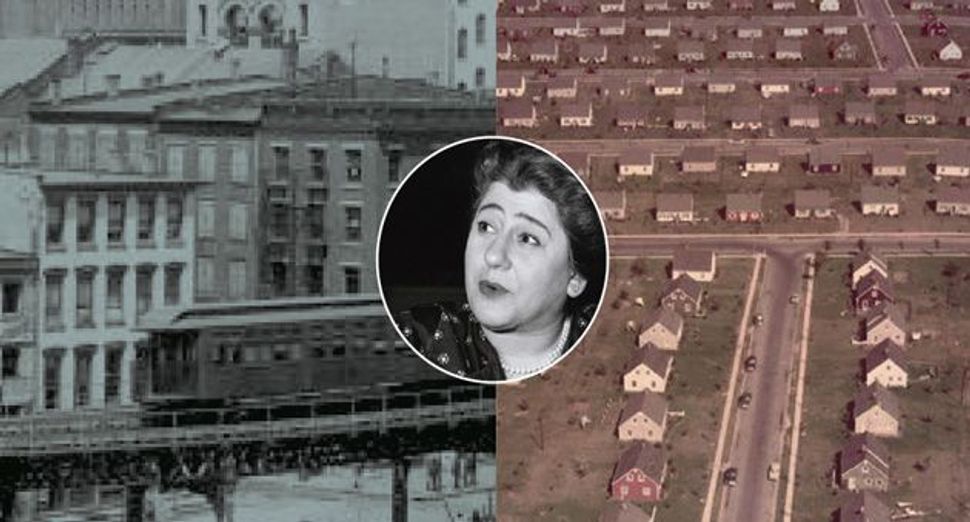 Much has been made of late of the yoo-hooing Molly Goldberg, the eponymous subject of Aviva Kempner’s warmhearted documentary about Gertrude Berg, the hugely successful actress and producer of the interwar years who created the long-running fictional character on radio and television. Framed by an open window and a cheery flower pot, Molly announces her presence to the world; she’s hard to miss.

Though latter-day audiences, given to tweeting on Twitter, would no more lean out the window and converse with their neighbors than they would resort to using a rotary phone, we are meant to be charmed, as well as chastened, by Molly’s instructive show of affability. The apparent ease with which she moved between the public and the private spheres of daily life reminds us of a time, back in the day, when the Mrs. Goldbergs of the world held sway and things seemed relatively uncomplicated. That’s the charming part. At the same time, Molly’s behavior functions as a form of reckoning, one that compels us to acknowledge that perhaps something vital and affirming was lost in the process of exchanging a noisy, multistory tenement in the city for a quiet split-level ranch house in the suburbs.

Chastened or charmed, either way we are held captive to a particular vision of the immigrant experience that owes more to sentiment than to history. “The Goldbergs” glosses the not-too-distant past, offering a steadying hand in place of instability. Consider the aural scape, the ambient noise that characterized the urban places that Molly and her friends called home. Noise was inescapable; it was everywhere, from the cries of the old clo’ dealer and the scissor grinder, the toot of the tugboat, the clattering of the subway, the whine of the garbage truck and the blare of the radio, to the ceaseless din of conversation — all that yoo-hooing — that welled up from the street and the stoop, the airshaft and the open window. Awash in sound, the city truly did not sleep. “The Goldbergs” reflects this urban reality by having Molly yammer away in public, but then it does one better: The show makes it seem as if open-air conversations were the stuff of civic virtue rather than a casualty of congestion.

Where Molly’s creator actively sought out noise — Kempner’s film makes the point that Gertrude Berg often sought inspiration amid the cacophony of Manhattan’s Lower East Side — most city dwellers suffered through it. Then, as now, most residents were in no position to do anything about what we’ve come to call noise pollution: “Grin and bear it” was the default mode of accommodation. But early in the 20th century, a group of well-heeled, public-spirited New York City citizens, their nerves frayed and their sleep disturbed, sought to effect change. Led by the redoubtable Julia Barnett Rice, they formed the Society for the Suppression of Unnecessary Noise, whose brief made the case that too much noise was actually “injurious” to one’s health. The organization, enlisting the support of local medical authorities and politicians, lobbied successfully for the regulation of sounds that emanated from the street. As one newly instituted ordinance of 1909 would have it, “No peddler, vender or huckster who plies a trade or calling of whatsoever nature on the streets and thoroughfares of the City of New York shall blow or use… or permit to be made, any improper noise tending to disturb the peace and quiet of [the] neighborhood…” Another ordinance designated special quiet zones around hospitals and schools, for the benefit of the sick and the young. Thanks to these new measures, the city was able to “put the lid on noise,” The New York Times trumpeted. From here on out, the paper predicted, a “great wave of silence” was sure to blanket the metropolis.

The belief that “quiet is a prime requisite” of modern life soon took hold throughout the nation, giving rise to various noise-abatement commissions and a blizzard of regulatory ordinances. And yet, despite these widespread efforts at noise control, the modern urban soundscape remained a loud one. Much of its recurrent noise, investigators discovered, came from the neighbors.

Whether we hail noise as a boon, a perquisite of freedom, as did Molly and her neighbors, or rue it as a problem, a defect of modern America, as did Rice and her confreres, we would do well to remember that noise is as much a social construct as it is a physical phenomenon. “The Goldbergs” idealized and romanticized it; the real-life Rice sought to diminish and control it. That the show endured for as long as it did suggests that we are most likely to embrace the past when it is sugarcoated. While we are not about to yoo-hoo out of our windows anytime soon, it’s nice to think that we once could.