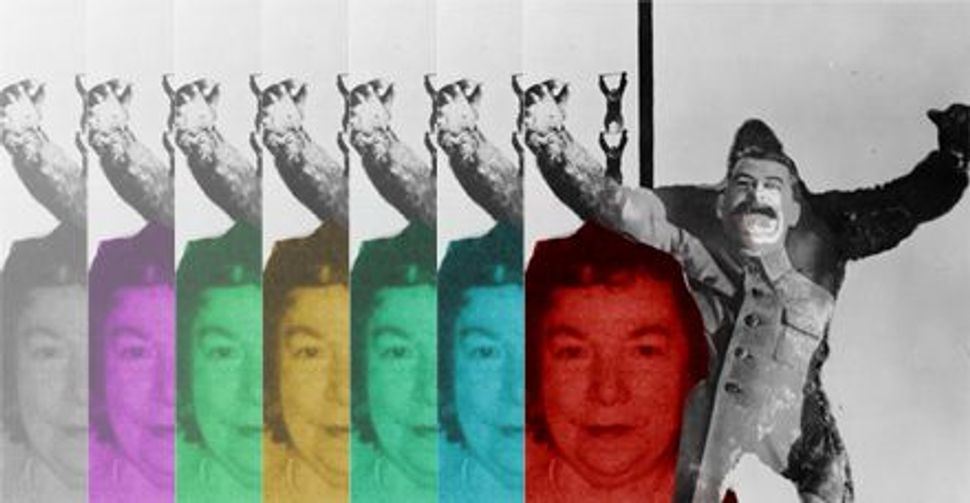 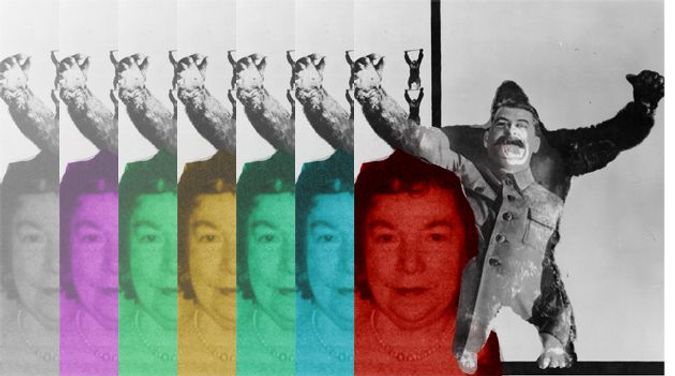 For decades, readers of the Forverts have been delighted by Miriam Hoffman’s wry, literary vignettes. Fresh and personal, historic yet contemporary, Hoffman tells stories of family lives as they intersect with history. Beginning with this story, first published in 1987, her vignettes with be translated into English and published on the forward.com web site.

What, you may ask, was the nature of the relationship between my mother and Stalin? The answer is that both of them made use of the same railway tracks — he on his way to the Kremlin, she on her way to the Gulag. This intimate kinship was not one to be lightly dismissed, because in fact the grizzly old man with the impressive mustache was attempting to convince half the people of the world that he was the “Father of All Nations.” Following his own line of reasoning, didn’t that inadvertently make my mother his daughter?

What did he have against her? Nothing! So why the Gulag? Though busily engaged in the distribution of hell on earth, Stalin hadn’t failed to make provision for my mother. He had guaranteed her a fair share of jails and labor camps, starvation and misfortune. This combination of catastrophes might have continued indefinitely. But not for my mother! She declared unequivocally that such tactics would not work with her. On the contrary, she would teach him that you don’t fool around with Tilche Bryndl of Lodz. When push came to shove, she didn’t hesitate; she rolled up her sleeves, took pen in hand, and showed him what she was made of.

After being liberated from the slave labor camp, we were lodged in a big Russian city as tenants in a dreary, wet cellar, with not even a drop of fresh air to breathe. My mother decided to write Stalin a series of letters and to demand what every lawful citizen was entitled to — namely, a decent home. Of course, at that exact time in 1942 Stalin was preoccupied with the war, engaged in a thousand matters: keeping an eye on the front at Stalingrad… and sending people to Siberia; defending Leningrad… and sending people to Siberia. And now, to top it off, another affliction surfaced — my mother’s letters.

My mother was a hotshot with the pen, and she deluged him with her correspondence. For Stalin her approach was unique, and her letters often began with an elaborate salutation:

“Most Exalted Father of the Nations, who has assured humanity of fairness and justice and freedom, who has sacrificed himself for the working class, put them on their feet and made of them what they are today. Believe me; they’ll remember it as long as they live. Loyal protector of the persecuted and the pursued, guardian of the exhausted masses, and faithful redeemer from the yoke of capitalism — how can I recount your accomplishments? There is none with whom to compare you in the annals of the human race. One can only be left speechless by your achievements. Who is there to sing your praises? You are one of a kind, unique in the universe.

But though you have provided for everyone, you have forgotten me… me and my innocent husband, who is rotting in the jails and labor camps for absolutely no reason whatsoever. You’ve forgotten also about my tiny child, who lies ailing in a dark cellar and doesn’t see the light of day. Why do I deserve this, dear Father of the Nations? You must arrange for my husband to be freed and provide us with a home of our own.

I know full well how busy you are; your plate is full, what with Smolensk and Stalingrad. Nevertheless, I don’t see how you can be indifferent to my requests! I realize also that you consider some matters to be greater priorities, but I won’t stop writing until you pay attention to me. As soon as I finish this letter, I’m going to sit down and write a second and a third letter; I won’t rest until you respond.

Send my regards to everyone at the Kremlin. Your loyal citizen, Tilche Bryndl.

Have you ever heard of such boldness? Not for naught was she warned by her neighbors that Stalin would make her eat the dust. But that didn’t stop her, and she continued to write her letters and keep an eye out for the postman. Maybe she would finally hear from the old scoundrel.

Some time passed, and no response was forthcoming. But my mother did not give up that easily. As dependably as the sun rose each morning, she dispatched her daily letters to the Father of All Nations. Most of the pages were covered with descriptions of his awesome majesty. And at the very bottom she would add a couple of little lines: “It’s a life and death matter! We’ll soon expire from the damp and the cold. I beg you, release my husband and provide us with a decent home.”

One bright morning, a letter arrived from the highest Soviet authority in Moscow. It read:

Dear Madame Tilche Bryndl. We have taken your letters into consideration and have decided to investigate your demands. We require only one thing of you: Stop writing, because otherwise we will provide you with stable housing among the polar bears. In the meantime, we will re-examine the charges against your blameless husband and provide you with a home. Show this letter to the chief officer of your police district and you will get the key to your new place, located at Astrakhanskaya Olitzia Street, number 27. And remember that you are living in the land of freedom and justice, where Joseph Visarionovich Stalin himself provides for every citizen personally. We are doing this by dint of his benevolence with this one proviso: Stop with the letters because the father of the nations has weak nerves.

Signed, Madame Krupskay V. Lenin, Head of the Bureau of Provision and Compensation

I can’t describe in my own words the great happiness that must certainly have pervaded our wet basement that day, for I was too young to preserve the memory. When my mother, however, was reminded of that day, she would swell with pride:

“First of all, in a short time, Father was released. Whether my correspondence with the Kremlin had anything to do with it, I don’t begin to know. As soon as Father was out of prison, we caught the tram, rode to the district headquarters and with a police escort went off to get a look at our new one-room abode.

“How can I express it? The house actually had a presentable facade: bricks, walls and a roof. When we got to our door, however, a seal was pasted on it, issued by the state Supreme Court, which informed every person in the building that this room was confiscated and that anyone entering through the door would be arrested.”

What a shock! All our joy fizzled out. What, then, did my mother do? She ran back to the district headquarters in a rage:

“Enough!!! Here I have a document from the highest Soviet official. Stalin himself gave the authorization for me to get this place immediately. And you don’t play games with Stalin!”

So they took another look at the red-stamped letter, blinked their eyes, flexed their shoulders and in no way were able to figure out the connection between this diminutive, darkly attractive young woman and the great Father of the Nations. But if Stalin says, “Give,” you give.

This time the commandant himself accompanied all three of us to the designated address, observed the “confiscated” notice with the seal on the door, scratched his bald spot and could not come up with a solution. He told her this one thing:

“The room cannot be entered through this door because it is sealed, and a judge must rule on it. I swear on my life that I haven’t the faintest idea when the court will decide to remove the seal.”

“And what will be with Stalin?” My mother shoved the letter from the highest Soviet authority in his face. “Bear in mind that I frequently exchange letters with the father of the nations, and I will be forced to write that his word counts for nothing here and the commandant of our district does not carry out Stalin’s commands.”

Upon hearing this refrain, the commandant turned white as chalk and trembled from head to toe.

“We’ll have to invent a strategy for entering the house until the court makes a ruling,” he muttered through chattering teeth.

Meanwhile, my mother went out into the yard. The room was on the ground floor, and she located the window. A tall tree grew near it. She clambered up the tree, forced the window open and crawled inside, the commandant reluctantly following.

“Ah, there you have it!” he cried out enthusiastically. “A gem of a room. Stalin is quite an expert when it comes to beautiful homes. It’s a room with every advantage. It even has a built-in French oven with a chimney. It will be a tiny bit inconvenient because of the sealed door, but that’s really no big deal. So you’ll have to crawl through the window for a short while until the difficulty is ironed out. Aside from this drawback you can live here in comfort. And now, I must bid you farewell.”

The official departed with a military salute, crawled through the window and disappeared down the tree.

My mother was in seventh heaven. Such a stroke of luck! She had finagled her way to acquiring four walls and a roof, airy and full of light. Despite having this one small drawback, plenty of people would volunteer to climb trees if they could only settle in such a place.

Little by little we became accustomed to climbing up the tree. Was that supposed to be a disadvantage to a little girl? Hardly! I don’t remember how long the climbing and crawling went on, but I do recall one thing: The day that we opened the door was a day of mourning for me.

In Moscow, meanwhile, they were quaking in their boots lest, heaven forbid, little Tilche Bryndl decide to continue her correspondence with the Father of all Nations, for who knows what might suddenly pop into the head of a young woman such as my mother.

The original Yiddish ended with the following paragraph.

But their fears were unnecessary, for as soon as my mother had settled us into our new home she started dreaming about making a final exit from the land which was so ingeniously founded on freedom, equality and justice — and, most importantly, being rid of the Father of All Nations.

Miriam Hoffman, lecturer in Yiddish at Columbia University, is winner of the 1992 Tony Award for translating Neil Simon’s “The Sunshine Boys” into Yiddish.

Read “The Wedding Ring,” another of Miriam Hoffman’s vignettes.