Shimon Attie Projects Past Into Present 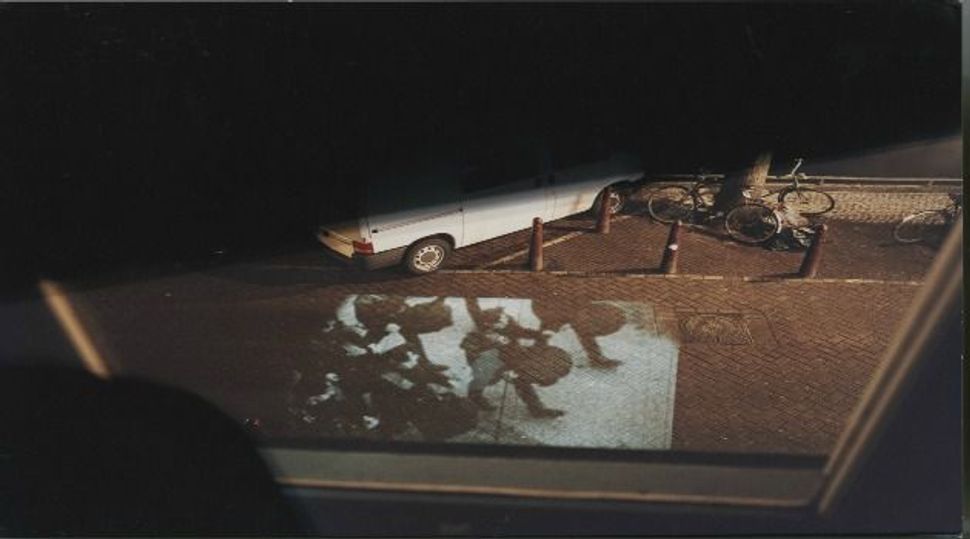 Artist Shimon Attie is probably best known for “Sites Unseen,” his 1990s series of temporary installations in Europe, in which he projected photographic images of a lost Jewish past onto actual sites. For “Writing on the Wall,” (1991–1993), Attie, living in Berlin at the time, was haunted by the lack of any past signs of Jews, so he projected images of former Jewish citizens onto the actual buildings, forcing local people to reflect on the disappearance of their former neighbors. In “Trains” (1993) he projected photographs of Dresden’s former Jewish citizens onto the city’s central railway station. In these installations, he was responding to a personal feeling that these places were haunted by dead Jews of whom there was an absence of any external sign.

Attie uses art to externalize his private visions — his postmemory, as Marianne Hirsch, a Columbia University professor of English and comparative literature who has written extensively on this topic, would call it — and make them part of the collective memory of the viewer. The experience of postmemory is to be haunted by the traumatic memories of past generations to such an extent that those memories seem one’s own. Attie’s in situ installations create a powerful visual palimpsest, a visible layering of the past onto the present, projecting images onto sites where the inhabitants would rather just forget history.

Currently, Attie’s 1995 installation, “The Neighbor Next Door,” has been re-envisioned by Attie and by co-curators Dave Tolchinsky and Debra Tolchinsky, at Northwestern University’s Mary & Leigh Block Museum of Art, where it will be exhibited until December 9. In the original 1995 in situ installation, Attie mounted 16-mm film projectors inside the windows of three different apartments along the same street in Amsterdam on which Anne Frank and other Jews had hidden during World War II; then, at night, he projected short film loops including actual footage that Jews in hiding during the Holocaust filmed from nearby windows. (One of the three films is actually from Nazi propaganda, an image of soldiers marching in formation.) These images differed from those of his other installations in projecting images of Nazis rather than Jews. Dutch passersby walked through the projected images; some stopped and turned, others kept walking. As art critic James E. Young wrote, the images forced the Dutch passersby to confront the national myth of how the Dutch sheltered Jews, and to immerse themselves in the hidden Jews’ memory and see the outside world from their perspective.

In this exhibit at Northwestern, these same three film loops are shown within the pure “white space” of the Alsdorf Gallery. Unlike the 1995 Dutch passersby who were surprised by and confronted with these images as they walked along the street, we are not physically walking through these projected images. As gallery visitors, we know to expect the images, although it takes effort to find them. Our experience of the original filmed image is mediated, like postmemory itself.

When you enter the gallery, you feel cocooned within its white space and within the loud, ambient noises of street sound, as if in a dream-space. The filmed images are not easily found or consumed on projected screens; instead, you enter the gallery and see only white walls, a crooked winding hallway evoking an attic as if you are the hiding Jew. It is only upon second look that you see three tiny holes notched in the wall, and you must bend and peer into the holes to see the films from the 1995 installation. Our viewing is active; as we look we cannot see the entire filmed image. When you peer into the holes, you feel you are peering into actual memories, the memories of the hidden Jew filming the image and the memories of the Nazis and collaborators, marching in spectral procession. Enhancing the feeling that we are entering the space of memory is the sense of fragmentation and repetition: The films are only several minutes long and repeat in endless flashes; the soundtrack of street noise continually repeats, just as our own memories continually return to us.

These projected images seem more blurred than they do in published reproductions of the 1995 installation. Unlike in the original images, here one cannot make out facial features or any details. The images have lost their sharpness and focus, much like memories do with time. The marching Nazis in “Prinsengracht 572: Passing Funeral” and “Prinsengracht 468: Passing Military Band” pass like shadows along the 1995 cobblestone pavement, spectral images of young men playing instruments in a band, of horses nodding their heads from the dead. The typical layering effect of Attie’s work is heightened in this reinstallation. Historical boundaries — between 1940s Amsterdam, 1995 Amsterdam and 2012 Evanston — are blurred. Witness perspectives are superimposed so that hiding Jews, wartime Nazis and collaborators, Dutch onlookers of 1995 and 2012 gallery viewers share the same vantage. While looking at the images we are suspended between layers of time as if in the space of dreams or memory. The effect is to transform this small gallery, so far across the seas of time and space from 1945 Amsterdam, into a sacred space, a collectively experienced memorial to the dead, a place for the reanimation of lost, forgotten and repressed memories.

At the same time, the installation is a reflection on the power of the medium of film itself. While we stand in the gallery, it is as if we are standing within the walls of a camera obscura, the ceiling lights beaming through the small holes and casting blurred images onto the Amsterdam streets. I was reminded later of the line from Jonathan Littell’s novel “The Kindly Ones,” in which the narrator, an SS officer, says, “I was always observing myself: It was as if a film camera were fixed just above me, and I was at once this camera, the man it was filming, and the man who was then studying the film.”

Attie has transformed two individual visions — his own postmemory and the hidden Jew’s film footage — into a collective one. Far from passive viewers of these films, we become simultaneously the hidden Jew, the marching Nazi, the Dutch passersby, the voyeur and even the medium itself.

Laura Hodes is a writer and lawyer living in Chicago.

Shimon Attie Projects Past Into Present