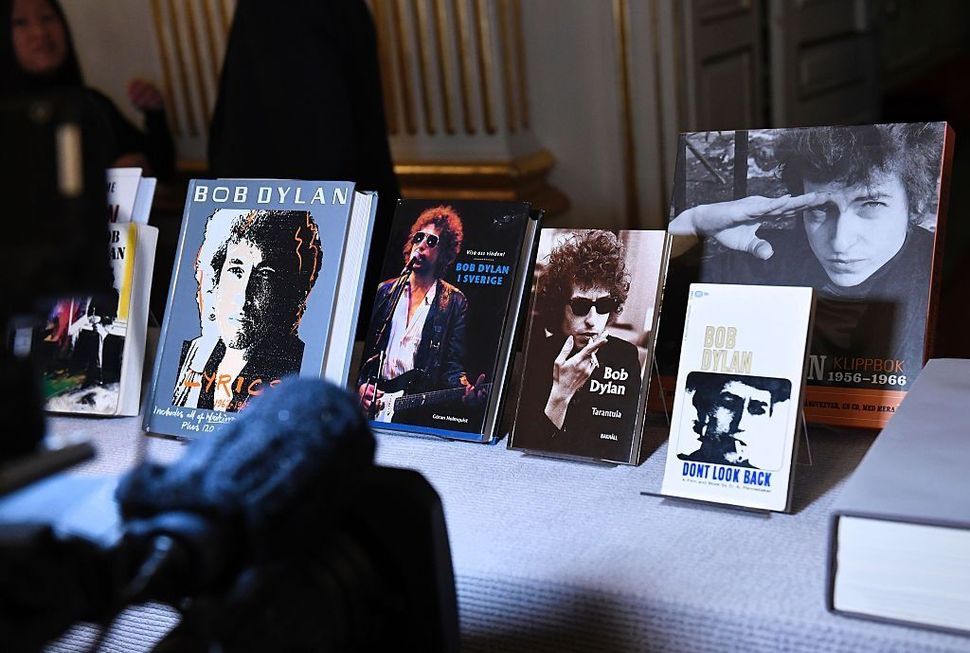 A collection of Bob Dylan books Image by Getty Images

The Forward, a Jewish publication, asks me a question: “Is ‘Rough and Rowdy Ways’ Bob Dylan’s best album since “Blood on the Tracks?” As a Jew, I can imagine only one possible answer: “yes and no.”

Musically, it’s not even close. “Desire” has more beautiful melodies, tighter lyrics and far better hooks. I also think, years from now, I will find myself singing along to the songs on “Street Legal,” “Infidels” and even the profoundly underrated “Empire Burlesque” when they pop up via “shuffle” more often than those on “Rough and Ready.” I know a lot of people think “Oh Mercy” belongs in this category and a few argue for “Tempest” and “Love and Theft.” But, in Dylan’s case, arguing about albums misses the point.

“What is Dylan saying now?” is a question people have been asking themselves since “The Freewheelin’ Bob Dylan” in 1963 (I doubt anyone asked it about 1962’s “Bob Dylan,” an album of mostly unremarkable covers recorded on a single day in while John Hammond read a newspaper in the producer’s booth.) Since then, Dylan has become a kind of echo in the minds of the people who came of age listening to him.

What’s my point? The Dylan oeuvre is not a collection of albums; it’s an ongoing expression of our collective unconscious. I’ve read a lot of Dylan criticism over the years. The most interesting and challenging work I encountered was Sir Christopher Ricks’ “Dylan’s Vision of Sin.” Read this famous former Oxford Professor of Poetry’s close reading of just a few of Dylan’s lyrics and the only conclusion one can draw is that it’s impossible to imagine the author of these lyrics is consciously aware of all the historical connections and literary allusions present in his work. Leonard Cohen writes more elegant poetry. And a Bruce Springsteen concert is a hell of lot more fun. But Dylan is our prophet; God’s vessel, if you will. He told us back in 1963 that the “times were-a changing,” the answer was “blowing in the wind,” and “a hard rain [was] gonna fall.” And damned if he hasn’t been telling us how that has turned out better than anyone else alive ever since.

I’m pretty sure he knows all this, which is why he rarely if ever answers a straight question about himself truthfully. As he told Doug Brinkley recently for his New York Times interview, speaking of the first song on “Rough and Rowdy,” “I Contain Multitudes” “…the last few verses came first…that’s where the song was going all along…you write it on instinct…in a trance state.” His songs “come from out of thin air.” That song, while obviously inspired by Whitman and referencing Poe’s tell-tale heart” as well as maybe Springsteen’s 1984 B-side “Pink Cadillac,” contains the already legendary rhyme:

And according to a some deep Dylanology diving in the British press, there’s also reference to the work of a blind 18th-century poet named Antoine Ó Raifteirí who I, and I’m betting you, dear reader, never heard of. And that’s one of the simpler songs on the album. It was fun trying to identify all the references in “Murder Most Foul,” when it appeared as if out of the ether, but the most moving part of it was that it somehow sent me directly back to the superior, but no less mystifying “Desolation Row.” Don’t get me wrong. I love listening to this album. I just don’t ever expect to understand it all. I appreciate that the genius returned, after eight fallow years, in part to confuse us even further, but also to remind us that we are not entirely alone.

This is a great Dylan album at least in part, because it comes at a moment of such great need. We live in age of atomization masked by the illusion of virtual community, It’s a time, aptly described in in Judges 17: 6, when “there was no king in Israel, but every man did that which was right in his own eyes.” And thankfully, we’ve still got this genuine prophet in our midst; soothing, angry, challenging, righteous, raspy and even sometimes, I must admit, kind of crazy.

After all, here’s a nearly 80-year old guy singing about his creation of a Frankenstein love monster in a single song that contain references, among others: Shakespeare’s Julius Caesar and Richard III, Homer’s Iliad, Bo Diddley, Martin Scorsese, Al Pacino, the White Horse Tavern, Liberace, Leon Russell, Trojan women, the first Crusade, St. John and St. Peter, and those “enemies of mankind” Marx and Freud. “If I do it right and put the head on straight, I’ll be saved by the creature that I create,” he concludes.

Us too, God willing…

Eric Alterman is CUNY Distinguished Professor of English at Brooklyn College and The Nation’s media columnist.