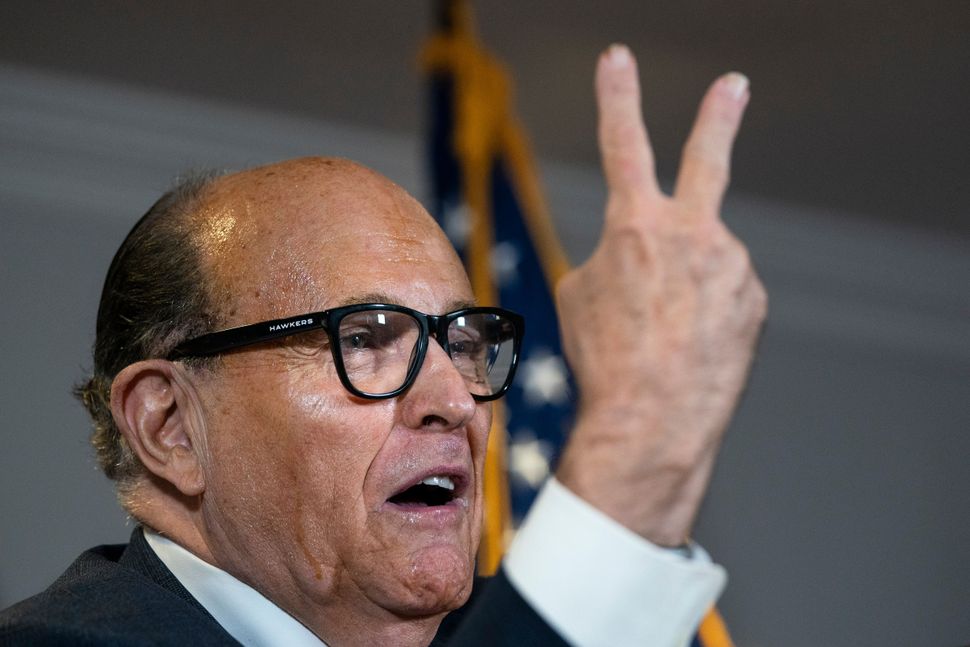 Shortly before hair dye streamed down his face, and he, predictably, implicated George Soros in helping orchestrate large-scale voter fraud, Giuliani asked the gaggle in attendance if they had seen the 1992 comedy “My Cousin Vinny.”

“It’s one of my favorite law movies, because he comes from Brooklyn,” the cinephile ex-mayor said. The Forward has learned the director of that film believes Rudy has not absorbed its legal lessons in his pursuit of an unfounded lawsuit against several battleground states.

When Rudy mentioned the movie, he wasn’t just breaking the ice. He was using the comedy, about Vincent Gambini, a lawyer who winds up defending his falsely-accused cousin in an Alabama murder trial, to illustrate a point.

Rudy: Did you all see My Cousin Vinny? pic.twitter.com/SVwMNiIysi

Giuliani alluded to a scene where Gambini crosses to the back of the courtroom to prove that a witness — with very thick glasses — couldn’t have seen beyond a reasonable doubt the murder that occurred at the Sack-O-Suds grocery store. Aping Joe Pesci (terribly), Giuliani held up his fingers and asked, “How many fingers do I got up?”

He then claimed that Republican poll watchers couldn’t do their jobs because they were further away from the ballot-counting than “‘My Cousin Vinny’ was from the witness.”

Now, to be fair to Giuliani, he’s not the only lawyer to reference “My Cousin Vinny” in an argument. It’s considered one of the most accurate legal films ever made and is a staple of law school classrooms. Helping its fidelity is the fact that director Jonathan Lynn, profiled in the Forward in 2013, has a law degree from Cambridge.

I reached out to Lynn to see if he thought Giuliani might himself have taken some lessons from the film, which arrived in theaters sometime after Rudy’s celebrated prosecution of organized crime, but before his second (and first successful) run for mayor.

“I don’t think Rudy has learned anything from Vinny,” Lynn said in an email. “Vinny may have been argumentative and belligerent but he was searching for the truth. Rudy, not so much.”

But asked how he feels knowing Rudy’s a fan, Lynn was quite chuffed.