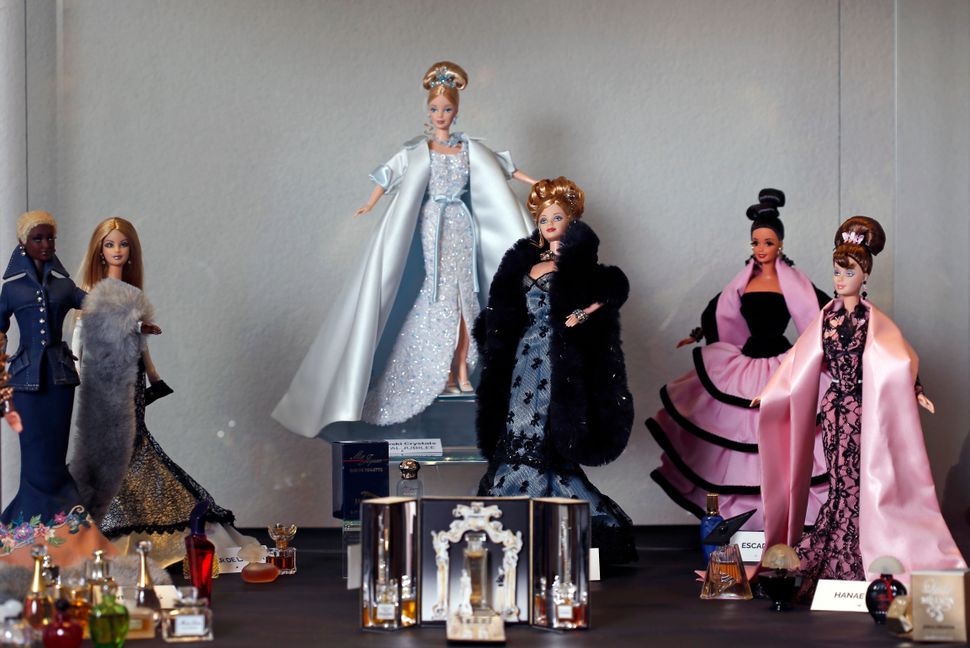 On March 8, 2014, the day before the doll’s 55th birthday, a [Daily Beast article](The Death of Barbie (thedailybeast.com) opined that the doll’s days were numbered due to declining sales. The Forward responded with mixed feelings for the Mattel toy, who, befitting her origins, meant a lot to Jewish women.

Barbie had her coming out on March 9, 1959 — henceforth National Barbie Day — when she appeared at the New York Toy Fair. She was the hour-glass-shaped scion of Ruth Handler, the child of Polish Jewish immigrants. The doll itself looked pretty goysiche, even if her namesake wasn’t.

“When Handler started Barbie it was because she wanted to give her daughter [Barbara] a doll who represented a woman instead of a girl,” Elissa Strauss wrote in these pages. “She thought it was important for girls’ self-esteem to be exposed to play with a doll with womanly features like breasts, and modeled her toy after a German doll that was meant as a gag gift for adults.”

Barbie’s German provenance came through perhaps a bit too strongly, as Strauss notes “she tapped into a fantasy of feminine perfection very particular to the mid 20th century. Those shiny blond locks, the wasp-waist, long legs and perky breasts proved irresistible to girls from all backgrounds.”

Her features were perhaps aspirational in their WASPiness, where WASPiness was regarded as the norm. Strauss welcomed more diverse iterations of the doll, wondering if today Handler might not create “someone a little more Semitic looking for her daughter to play with.”

To this end, some have reclaimed Barbie to fit that model. Scholar Jen Taylor Friedman gave Barbie tefillin. Filmmaker Tiffany Shlain made “The Tribe: An Unorthodox, Unauthorized History of the Jewish People and the Barbie Doll in About 15 minutes,” a film that argues Barbie was “the ultimate insider” as crafted by “the ultimate outsiders.”

Since Barbie’s creation, a duo of Orthodox women lawyers embraced the hot pink Barbie doll aesthetic. Filmmaker Ayelet Raymond goes by the moniker “Kosher Barbie.” Iris Apfel was made into a Barbie at the age of 96. All bear different markers of femininity, but wear them on their own terms.

Of course any conversation surrounding this storied toy line must consider the unrealistic, anatomically impossible body expectations it has perpetuated across the decades. Efforts to undo that legacy have been consistent, and now her dimensions appear more human and the vocations available to her seem limitless. Vet? Check. Veteran? Check.

While markedly less problematic today, Barbie has appeared in other troubling places along the years. A recent Burning Man art project drew ire from the ADL for imagining a Barbie Auschwitz. In one of the countless pieces of Barbie multimedia, the doll even met Harvey Weinstein.

Barbie’s profile is no doubt a complicated one, however pure Handler’s stated first intentions to show that a “little girl could be anything she wanted to be.”

Handler, a Mattel executive, who co-founded the company with her husband, Elliot Handler and his friend Harold Matson, was proof of that premise — even if her most famous creation’s early days were dominated by swimsuit competitions. In hindsight, that choice might fit Handlers’ defense that “Barbie always represented the fact that a woman has choices.” Whether that’s swimwear model or reflector vest construction worker. She was kind of a PVC Zelig in the end — all things to all people.

In a would-be eulogy for the doll in 2014, Sarah Seltzer wrote that playing with Barbie gave her, and other girls, a chance to “practice running the world.” By the time the dolls reached her, they had deviated from the prototype and started to reflect the world at large.

“My collection grew each birthday and Hanukkah, encompassing Barbie’s posse of multi-ethnic friends,” Seltzer wrote, noting that the typical blond Barbie was usually cast as the villain. “The games I played with my dolls helped me envision daring, limitless lives for women and girls,” Seltzer concluded. Coming from a long line of strong women, from Ruth to Deborah, this is something Jewish girls can identify with. They don’t need an RBG doll to do it, but, one must admit, the identification might be helped along by yet another rebrand.

While Hasbro drops the “Mr.” from Potato Head, how about a nod to Barbie’s origins. Can we call her Babs?