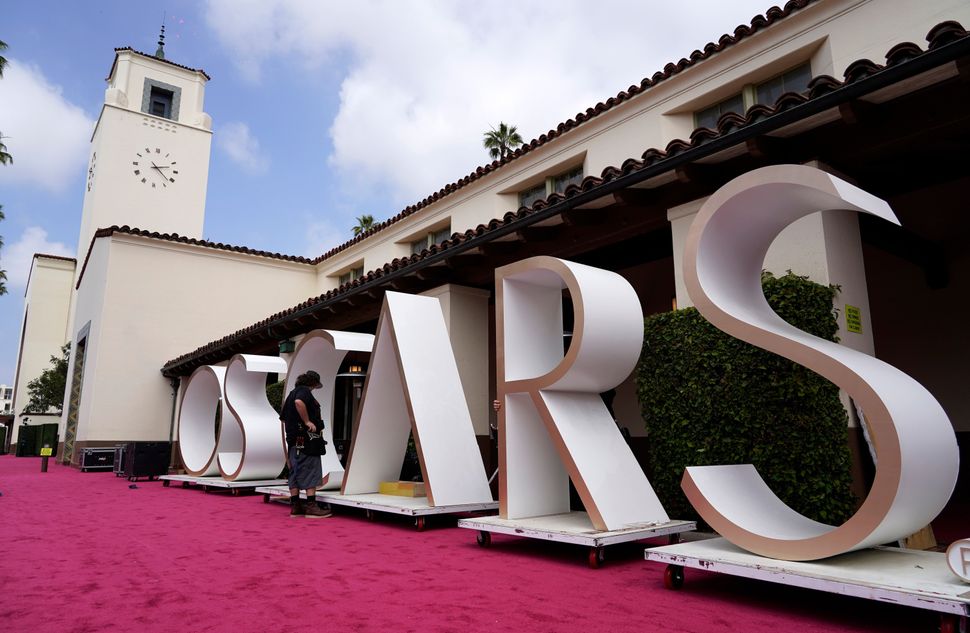 The outside of the 2021 Oscars venue Photo by Getty/Pool

If you’re like me, you were hoping there was an envelope mixup. We’d seen it before at far more polished ceremonies.

The 2021 Oscars, which broke with tradition by announcing Best Actor as the final award on Sunday, seemed designed from tip-to-tail to honor the memory of Chadwick Boseman. And then he lost to Anthony Hopkins who was probably asleep at the time in his home in Wales.

It was an earth-shattering shocker at the end of a pretty sedate evening short on surprises. Setting up shop at a train station added to the prosaic mood, but maybe not so much as the room setup.

I also like that the room is set up to look like the event room at a Catskills resort in the 1960s.

Brodesser-Akner nailed it. Much like a Grossinger’s summer-end fete, where tummlers shower visitors with good-natured jibes and silly awards, there was an air of familiarity and not so much an aura of prestige. In her introduction, Regina King said they were assembled to celebrate a “creative family of storytellers.” Ah, mishpoche. The theme carried the evening and it certainly had its Yiddishkeit.

In the anxiety of influence department, we learned that Oscar winner Florian Zeller was encouraged to write “The Father” after seeing Barry Levinson’s “Rain Man,” starring Dustin Hoffman (we also heard that Lin Manuel Miranda’s first cinema-going experience was to another Hoffman vehicle “Kramer Vs. Kramer” — yikes).

Trivia about our nominees topped off the evening. We learned Aaron Sorkin popped popcorn and director Darius Marder had a sushi catering business in the Green Mountain State — one wonders if their Jewish grandmothers were worried.

The “West Side Story” trailer was the first commercial break. Spielberg has a tough act to follow with Robert Wise’s film adaptation, but already seems to be shaping his own iconography — shadows of the Sharks and Jets merging over a scuffed floor, and an ever-present Chekhov’s gun in shallow focus. We don’t see too much of Jerome Robbins’ choreo, but it may be too soon to be alarmed by that.

While “West Side Story” famously opens with three notes modelled off the tekiah shofar blast — we hear them in the iconic whistle in the trailer — as the ceremony wore on we became privy to the Jewish-influenced soundtrack for another film… “Blade Runner?”

Harrison Ford showed up to read a bunch of screening notes for the film. I could tell early on, by a mention of the abysmal voiceover — “he sounds drugged” — and the name “Deckard” that it was the movie in question (Ford saved the title for effect). But one note threw me.

“The synagogue music is awful on the street, we got to use Vangelis.”

They did. But now I want to see the synagogue music version! (I could find nothing on this, not even in our Secret Jewish History.) #ReleasetheJewishCut

I was just trying to remember the same thing but then remembered the original #BladeRunner tagline was “Come for the androids, stay for shacharit (because we need a minyan).” https://t.co/2GPyf9e0wy

Oscar winner Marlee Matlin presented awards in ASL to a new Jewish winner, Pippa Ehrlich, who snagged Best Documentary feature for her film “My Octopus Teacher.” In the documentary short category, “Colette,” about a resistance fighter visiting the concentration camp where her brother was killed, took home Oscar.

In his acceptance speech, Anthony Giacchino said that when the film was nominated, Colette reminded him that “the power of documentary filmmaking ensured that her brother, Jean-Pierre, was as she put it, no longer lost in the night and fog of the Nazi concentration camp system.”

The evening abounded with messages of inclusion and tolerance as Chloé Zhao made history with her wins for “Nomadland.” (She became the first woman of color and the second woman ever to win Best Director.)

In a moving speech accepting his Jean Hersholt Humanitarian Award, Tyler Perry told a story about when his mother, who grew up in the Jim Crow South, had to stay home from work because of a bomb threat. She worked at a Jewish Community Center.

While by turns bizarre, and ultimately a letdown for many, the Oscars tried their best to convey a spirit of community in an industry too long stalled by the pandemic. The best moments were of bonhomie. Lil Rel Howery joshing his “Get Out” costar — and newly-minted Oscar winner — Daniel Kaluuya. Yuh-Jung Youn flirting with Brad Pitt. Glenn Close gamely doing “Da Butt” and a kind of mutual admiration society that actually felt genuine.

Without big numbers and bombast, we got that Borscht Belt rec room vibe, a little bit of what Oscar inventor Louis B. Mayer termed “Mayer’s Ganze Mishpocheh” — thankfully with more of a union-friendly spin.

And because no trip to the Catskills would be complete without an elder Jew enjoying a brew, we even had Chuck Schumer taking a dig at Larry Kudlow’s “plant-based beer” and sitting alarmingly close to his TV screen.

Excited to be watching the Oscars with an ice cold plant-based beer.

A bit more of this kind of communal feeling couldn’t hurt an Oscars in transition. We only hope the Academy members don’t fail our brackets quite so calamitously next year.