Your complete Jewish guide to watching the Oscars 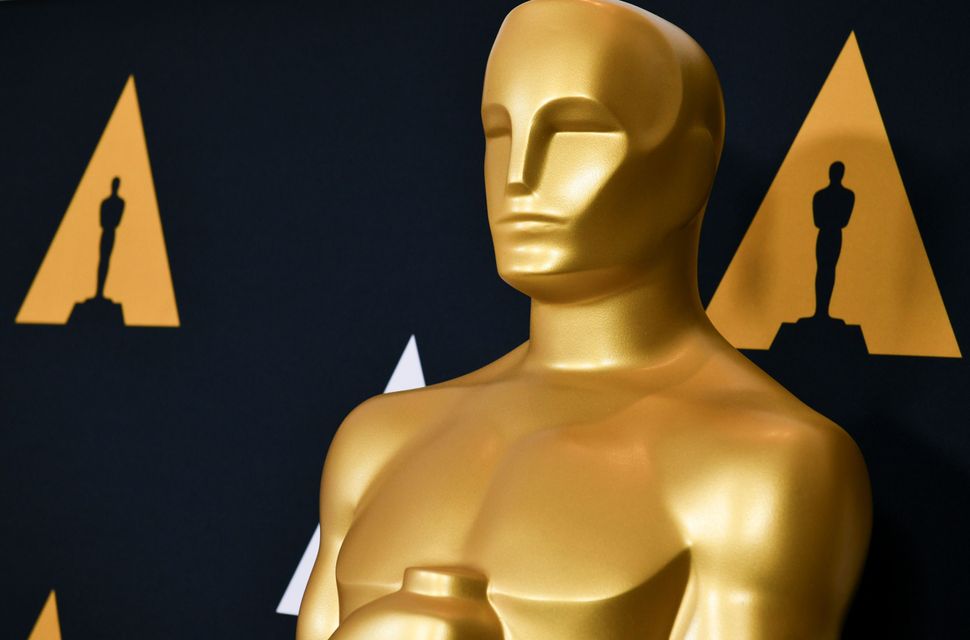 The 92nd Academy Awards ceremony is already a Jewish affair. Though it hasn’t been advertised, the evening is not actually hostless; Elijah is slated to Emcee — the Academy is just waiting for him to show up for dress rehearsals.

We jest, but film’s biggest night still has plenty of Yiddishkeit to offer. Jewish directors, writers and actors abound in the major categories and a film in which Hitler is rendered as a goose-stepping clown is up for Best Picture. At least one Israeli model will be in attendance. Don Rickles’s ghost will, as is his wont, be hovering in the wings of the Dolby Theatre making withering remarks about Scarlett Johansson’s current beau, Colin Jost. While we long for the days of Billy Crystal’s tenure, we welcome the abbreviated format of an Oscars without a host and embrace the Jewishness that still lingers over the proceedings.

While Jewish director Taika Waititi’s “Jojo Rabbit,” which tells the story of a Jewish girl hiding in the home of a member of the Hitler Youth, is the only explicitly Jewish film up for Best Picture, five of the eight nominated films were directed by Jews.

Todd Phillips directed “Joker.” Sam Mendes helmed “1917” and is among the chosen alongside “Ford V. Ferrari” director James Mangold (the script for “Ford” was penned in part by Jez Butterworth, whose play “The Ferryman”earned Mendes a 2019 Tony for Best Director). Noah Baumbach of “Marriage Story” is Jewish, though his partner, Greta Gerwig, whose “Little Women” is also up for Best Picture, is not.

Waititi and Phillips (with Scott Silver) are up for Adapted Screenplay, with Waititi working from Christine Leunens’s novel “Caging Skies” for his screenplay and Phillips and Silver riffing on a classic Batman villain for their script. Mendes and Baumbach are nominated for Original Screenplay, though both men mined their personal histories for the films, one examining the fray of his grandfather’s time in the Great War, the other meditating on the frontlines of his divorce.

Joaquin Phoenix is nominated for his manic, emaciated turn as Arthur Fleck in “Joker,” a character originally dreamed up (if not under that given name and origin story) by the Jewish comics team of Bill Finger, Bob Kane and Jerry Robinson.

It’s Phoenix’s fourth nomination, and he already won the Golden Globe and the BAFTA for it, but Scarlett Johansson received her first Oscar nominations in both the Best Actress and Supporting Actress categories for “Marriage Story” and “Jojo Rabbit” respectively. Cate Blanchett was the last actor to have that distinction for playing the OG WASP Elizabeth I and the very Jewish (though avowedly Christian) Bob Dylan.

Despite a great showing in the Best Picture category, only Mendes and Phillips are up for Best Director.

Rounding out this esteemed company are two cousins, Randy Newman and Thomas Newman, part of the second generation of the legendary Newman film music family. Randy is nominated twice, for Original Score for “Marriage Story” and Best Original Song for “Toy Story 4,” while Thomas has his fifteenth nomination for the score of “1917.” If Thomas wins, it will be his first Oscar; Randy has taken home the gold twice before.

Randy Newman is also scheduled to perform his nominated song, “I Can’t Let You Throw Yourself Away.” It won’t be his first time at the piano at the awards, and it almost certainly won’t be his strangest. That title has to go to a 2001 rendition of his song, “A Fool in Love” from “Meet The Parents,” where he and The Bangles’s Susanna Hoffs crooned a duet backed by a disco ball and a pyramid of white fur-hooded choristers. That really happened. Look:

Idina Menzel will perform “Into the Unknown,” from “Frozen II,” a song that takes her singing range to rarely-explored places and — we hope — won’t result in an epic crack on the scale of her New Year’s Rockin’ Eve 2015 solo. In an interesting twist, nine international singing voices for the character of Elsa, will join Menzel to belt it out.

Per IMDB, the evenings presenters will include razor-cheeked waif Timothee Chalamet, known for dishing out bagels on the red carpet; the ever-unpredictable Shia LaBeouf (likely without the “I’m not famous anymore” paper bag); and Adele Dazeem — sorry, Idina Menzel, again.

SOME HEBREW OR YIDDISH?

Wonder Woman herself, Gal Gadot, will be presenting and Quentin Tarantino, whose wife is Israeli, and who addressed her in Hebrew at the Golden Globes, is up for Best Picture, Original Screenplay and Director for “Once Upon a Time… in Hollywood.” All this to say that we may have some “Todas” in the mix on the night. We also have our crib sheets out for anyone who uses Yiddish, and think that we can rely on someone saying “Schlep.” As in, “Thank you to my husband, who schlepped everyday from Santa Monica to Silver Lake to pick up the kids while I was on location in Rome filming ‘The Two Popes.’”

Which reminds us, should anyone thank their mother before God, they’re probably a little Jewish, somewhere, before they were Episcopalian.

Glenn Weiss, the longtime director of the Academy Awards, Tony Awards and, most impressively, the Nickelodeon Kids’ Choice Awards — last hosted by DJ Khaled — will oversee the 2020 Oscars. He’s backed by an impressive crew of writers, including seven-time Emmy Award-winner Beth Sherman; award show standby and sometime speechwriter to Amy Klobuchar and Elizabeth Warren, Jon Macks; and John Hoffman, who wrote an unproduced screenplay called “Queen of the Jews,” about — we must assume — Barbra Streisand.

Here are some Jewish people we expect to hear jokes about: James Franco (for his infamous co-hosting gig), Mark Zuckerberg, Sheryl Sandberg (recently engaged), Adam Sandler (for his “Uncut Gems” snub), the Safdie Brothers (ibid), Ivanka Trump and Jared Kushner, Ronan Farrow (if he counts — which is a hot-button issue), Bernie Sanders, Jodi Kantor, Adam Schiff and Jerry Nadler, plus any of the Jews nominated. We can expect that ScarJo, given her oft-mocked claim that she can play anybody and anything, will probably be subject to a ribbing, especially given her dual-nomination. Members of our Shande List (Weinstein, Polanski, Epstein, Dershowitz, etc.) are likely objects of fun as well.

Kirk Douglas passed away at 103 on February 5, 2020, days before the Oscars. He is preceded in death by a number of notable Jewish screen legends who left us since the last ceremony. Expect to see tributes to composer André Previn, producer Robert Evans, actor Ron Leibman (who debuted the role of Roy Cohn in “Angels in America”), “Mod Squad” star Peggy Lipton and“Hello Dolly” composer Jerry Herman. Of those who died in the new year, Elizabeth Wurtzel, whose memoir “Prozac Nation” was made into a film, and actor and “The Graduate” screenwriter Buck Henry will likely be honored.

Finally, while the Academy’s audit firm of choice, PricewaterhouseCoopers, is an English outfit founded by non-Jewish blokes of the names of Price, Waterhouse and Cooper, the keepers of the Academy members ballots are accountants. Of course, not all accountants are Jews — that’s a harmful stereotype with an ugly history. But, just saying, it’s possible one of the accountants is Jewish.

Your complete Jewish guide to watching the Oscars