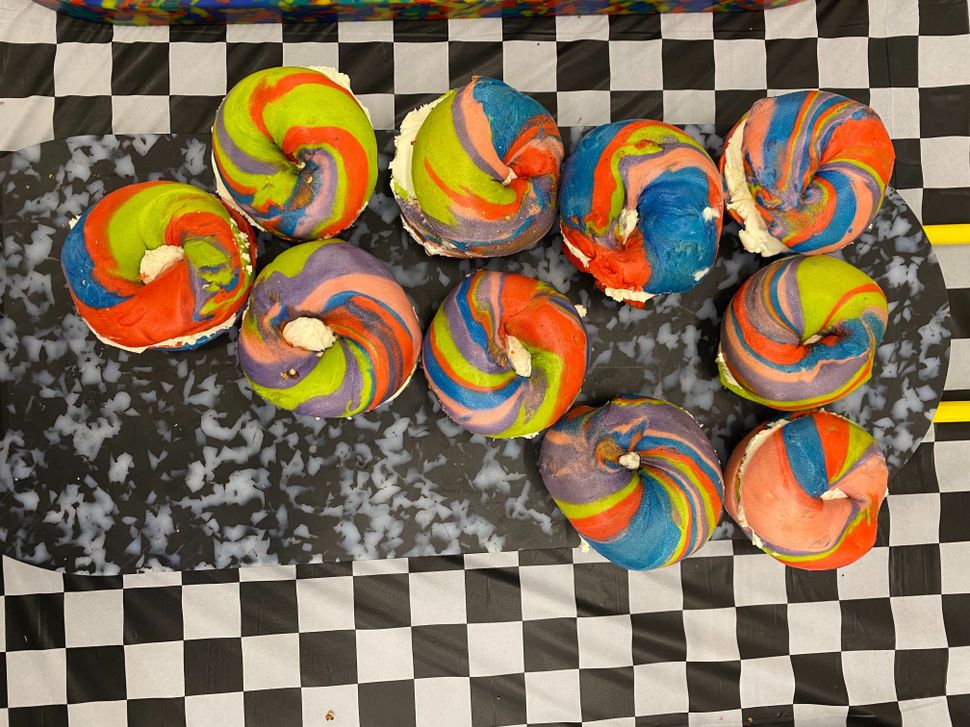 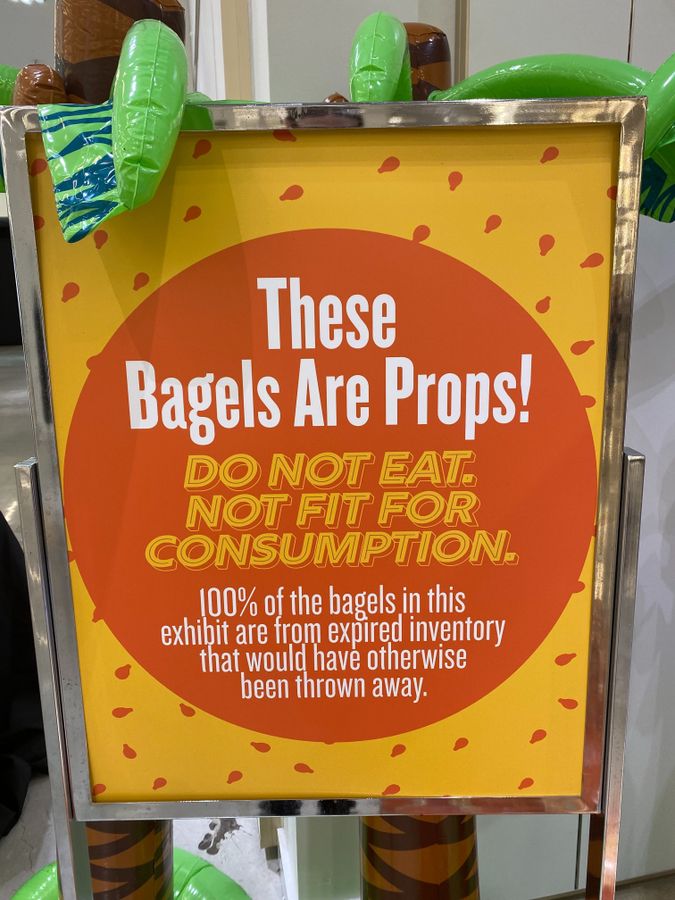 These Bagels Are Props!!! Image by Eliya Smith

Immediately upon walking into the Brooklyn Bagelfest, you passed a photo booth featuring a kiddie pool filled with real bagels. A steady stream of eager Instagrammers stepped into the pool to take pictures with oversized inflatable props, like fried eggs, bacon and palm trees — bagels are, after all, traditionally a tropical food.

“These Bagels Are Props!” a sign in one corner warned.

At Bagelfest, billed as an “unparalleled culinary and cultural experience,” most of the bagels on offer were edible, and some were quite tasty, but the sign seemed an apt descriptor of the entire event: Bagels were just as much a marketing ploy as a culinary delight.

Held in CityPoint, a multi-use commercial space in downtown Brooklyn — the mall features, among other things, a Target, an aerial silks studio and a bronze statue of Ruth Bader Ginsburg — the event offered bagel samples from renowned bagel shops around the city, as well as bagel-themed games and “expert panels debating the hottest bagel gossip.” 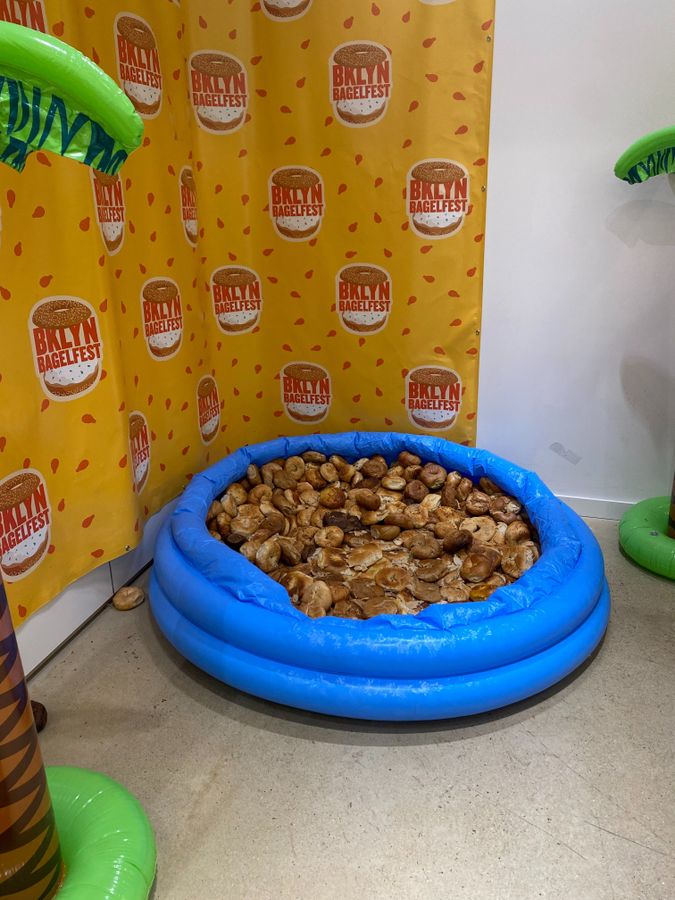 We can only imagine people came out of this with poppy seeds in their shoes. Image by Eliya Smith

It was initially difficult, on entry, to get much of a visual bearing on the event, because a performer known as Kosha Dillz was rapping on a small stage, and the noise was so loud it seemed to suppress all other sensory processing functions. Fortunately, the vast room in which the event took place was designed in such a way that sound ricocheted to the point of indecipherability, so it became possible to mostly tune Mr. Dillz out by reducing him to a sort of grating white noise.

Most of the stands lining the perimeter of the room offered a small slice of bagel and cream cheese. Some displayed increasingly creative iterations on the classic bagel — dessert, rainbow, pumpkin spice, bagel pocket. The stand offering pizza bagels was so popular that perhaps a hundred patrons stood in line at any given time, winding through the center of the room. Every so often, Mr. Dillz wove the people waiting on line into his rap, calling out, “pizza bagel line!” to cheers.

In addition to the requisite bagel sampling — blessedly free of charge, though most samples comprised approximately an eighth of a bagel, meaning one would need to taste probably 40 samples to defray the $35 cost of admission — sellers offered merch, which many in the room appeared to have purchased. 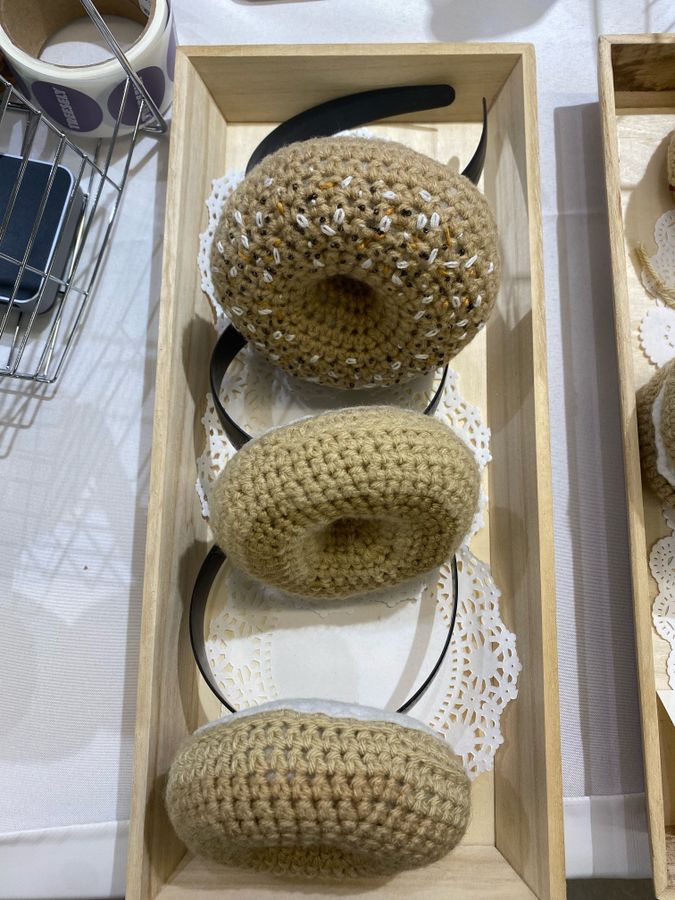 Opportunities for monetary consumption overshadowed edible ones. There were tote bags, t-shirts and hats. Many vendors just sold memorabilia. Some displayed bagel art, like postcards and prints. One stand sold bagel headbands — life-size knitted bagels glued jauntily atop a black band. These were displayed next to more diminutive knitted bagels labeled as Christmas tree ornaments.

There was even an oddly placed real estate stand, with a slogan that attempted to connect housing to bagels: “We know real estate, we know bagels,” it read, with a map showing the locations of iconic bagelries.

Bagelfest didn’t try to mask bagels’ connection to Judaism, but it didn’t substantively engage with it, either. In fact, the event contained far more Christian signifiers than Jewish ones.

There were the bagel Christmas ornaments, and in one corner, a small print cartoon drawing of the Last Supper with Jesus facing a pile of bagels on a plate. A passing attendee asked us to help her stage a photograph underneath a giant bagel one of the vendors created. “I’m trying to make it like the Virgin Mary,” she said, as we heaved the foot-wide doughy circle above her head like a halo. She clasped her hands prayerfully underneath. 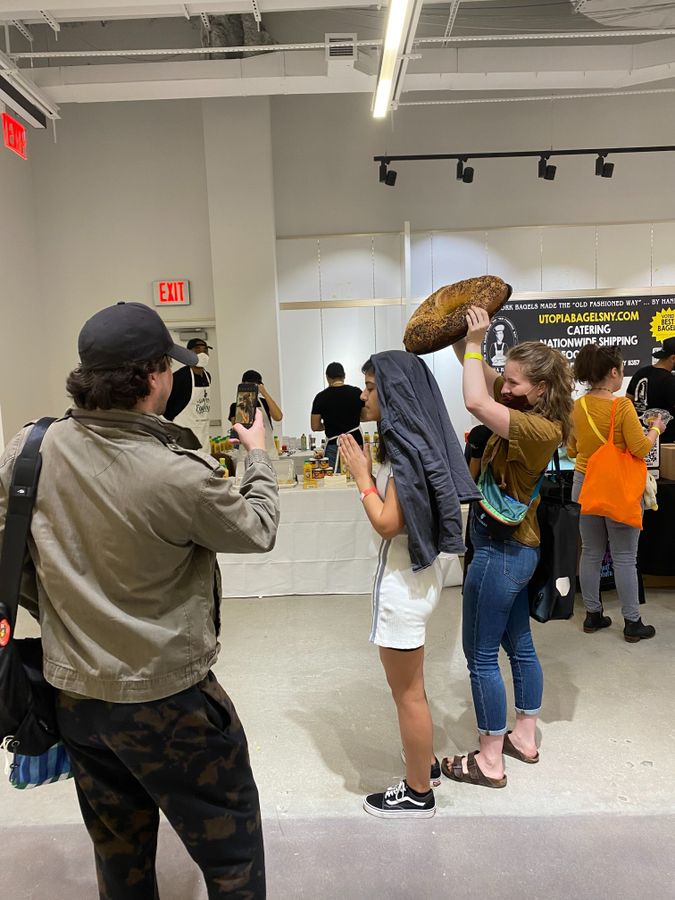 Helping an attendee create the Virgin Mary bagel halo of her dreams. Image by Eliya Smith

The event didn’t lack Jewish references, however; in the chorus to one song, Mr. Dillz shouted “JEW,” to which the crowd, per his coaching, responded weakly, “ISH!” Images of books were projected on two adjacent columns — admittedly it’s anyone’s guess what this was supposed to signify, but it was hard to shake the feeling that it sought to convey some subliminal connection to Talmudic study or a stereotype of Jewish bookishness.

Perhaps no aspect of Bagelfest embodied the superficial presentation of Judaism better than the afternoon panel. It lasted under 20 minutes and was barely audible, with Bagelfest’s founder Sam Silverman, whose corporate day job does not involve bagels, moderating. The panel featured Jake Cohen, a food influencer; Hannah Albertine, a food writer; and Morgan Raum, the head of membership at the Lox Club dating app, who runs a food Instagram account.

Though they spent most of the time discussing whether scooping bagels is ever acceptable, they did open with a question about what bagels meant to the panelists, resulting in one of the event’s most overtly Jewish moments. “That question is really like ‘what does Judaism mean to you?’” said Albertine. The other panelists nodded, offering meager lines about tradition, nostalgia and New York. 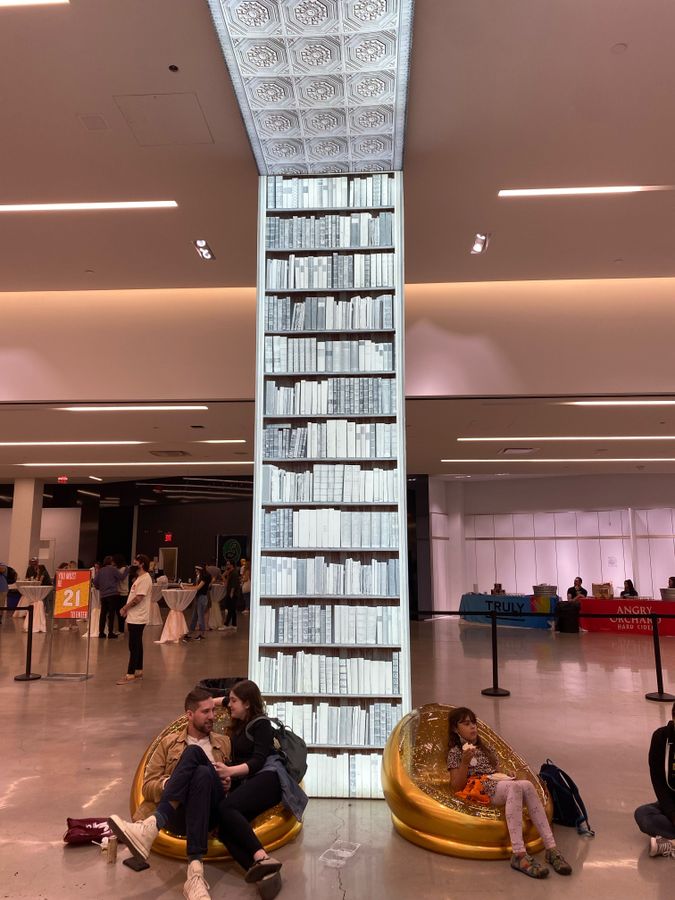 Jewishness, the panel implied, is intrinsically tied to loving bagels, and loving bagels is tied to Jewishness. Does that mean that if you love bagels, you’re at least a little Jewish?

That proposition seems absurd, but is also a logical conclusion to discourse around the bagel. We’ve fetishized it beyond what any simple carb-dense product deserves; the boiled and baked bread is asked to symbolize, more or less, all of Jewish identity, history and assimilation, as well as the entire city of New York. It’s a heavy load for any food, particularly one that is also beloved by non-Jews, non-New Yorkers and really almost anyone who can eat gluten. (The Bagelfest, it must be noted, had a pretty solid gluten-free offering.)

The Bagelfest embodied this identity crisis, unable to decide whether bagels are inherently Jewish or ubiquitously beloved. (Perhaps even a little Christian.)

In any case, the festival was, despite the pricey entry fee, packed, and attendees were more focused on getting their pizza bagel than parsing the nuances of their identity. As shoppers at the Target below loaded up on toilet paper and fast fashion, upstairs at Bagelfest, capitalism was incarnated in bagel form. Rainbow bagels flew off the table, guests flaunted their new bagel headbands and attendees got tipsy on hard seltzer in the 21+ section.

In the corner, the line to the bagel kiddie pool inched along, a steady stream of feet mashing the bagels into a leathery and increasingly greyish mat.