Booker Says He Would Still Meet With Louis Farrakhan 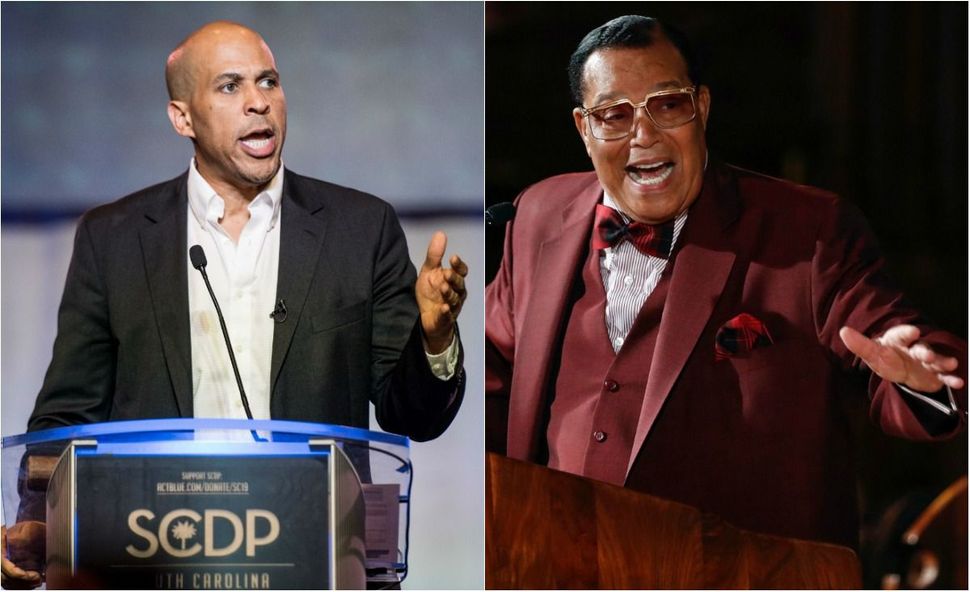 (JTA) — Sen. Cory Booker, D-N.J., a candidate for the 2020 Democratic presidential nomination, said in Columbia, South Carolina that he would continue to meet with Nation of Islam leader Louis Farrakhan, a notorious anti-Semite.

“I have met – I live in Newark so we have famous Mosque 25, we have Nation of Islam there,” Booker said Saturday at a faith breakfast campaign event. “As mayor I met with lots of folks talking to him. I have heard Minister Farrakhan’s speeches for a lot of my life, so I don’t feel like I need to do that, but I’m not one of these people that says I wouldn’t sit down with anybody to hear what they have to say. But, I live on a neighborhood where I’m getting guys on the streets offering and selling his works. I am very familiar with Minister Louis Farrakhan and his beliefs and his values.”

He was responding to a question from an audience member about whether he would avoid Farrakhan over his anti-Semitism.

In recent months Farrakhan has called Jews “satanic” and compared them to “termites.” He has accused Jews of controlling the government and Hollywood, and has called Hitler a “great man.”

His videos have been removed from social media sites for violating hate speech policies. In response to his anti-Semitic statements, organizations like Planned Parenthood have cut ties with Farrakhan.

Booker’s remarks come days after he slammed former Vice President Joe Biden, another 2020 candidate, for working with segregationist Democrats in the 1970s and calling two former senators the definition of “civility” despite being known as segregationists, Townhall columnist Beth Baumann noted.

“Vice President Biden’s relationships with proud segregationists are not the model for how we make America a safer and more inclusive place for black people, and for everyone,” Booker said following the remarks.

Farrakhan is a controversial figure in the black community, retaining close ties to major African American cultural figures even as many African Americans consider him irrelevant. The Women’s March leader Tamika Mallory drew criticism after she refused to condemn Louis Farrakhan last year.

Booker Says He Would Still Meet With Louis Farrakhan