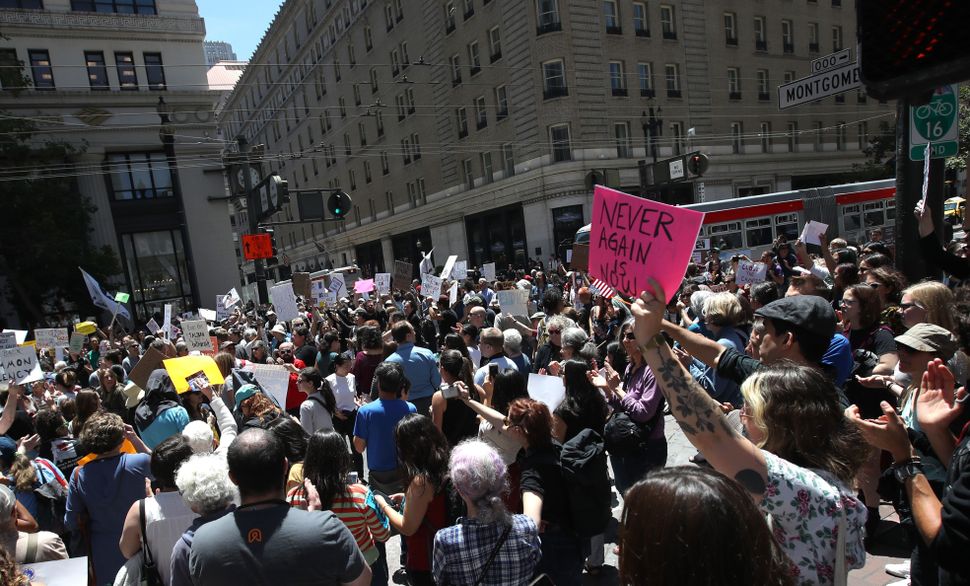 An immigration detention protest in San Francisco on Tuesday. Image by Getty

Over 1,000 Jewish activists and other protesters shut down traffic in central Boston Tuesday evening to protest inhumane detainment of people hoping to immigrate to the U.S. at the southern border, the Boston Globe reported.

The protests began at the city’s Holocaust memorial and chanted, sang and drummed their way to an ICE detention facility, where immigrants in Boston have been held while awaiting deportation. Protesters included leaders and members of IfNotNow, the Jewish social justice group, and was co-organized by Cosecha, the immigrant-rights group. The protests came just after 36 Jewish activists were arrested protesting outside an ICE facility in Elizabeth, New Jersey on Sunday.

“I think it’s particularly important for Jews, who face anti-Semitism, and have an ancestral history of trauma, to speak out on behalf of other people,” Rabbi Becky Silverstein told the Globe.

For many of the protesters, the phrase “Never Again” has become a rallying cry for the movement to end inhumane detention policies at the border. The phrase has been used by protesters opposing the Trump administration’s immigration policies since the first roll-out of the ban on immigrants from Muslim countries.

The use of the phrase has led to controversy, such as in June, when the Holocaust Museum in Washington, D.C., released a statement saying that it “unequivocally rejects efforts to create analogies between the Holocaust and other events, whether historical or contemporary.”

I’m here at the @NeverAgainActn protest. We are by the Holocaust memorial in #Boston. Never Again means #CloseTheCamps. #mapoli pic.twitter.com/IYgszKMw7K

“I don’t think we are at risk of overusing serious language, but at risk of not acting fast enough,” Stosh Cotler, the CEO of the Jewish social justice group Bend the Arc.

One woman, Jaclyn Friedman, posted about being one of the 18 people arrested in front of Boston’s ICE facility, where immigrants have been detained.

If you’re reading this, I have just been arrested with 17 other Jews and allies outside of the ICE Detention Facility in Boston, protesting the US government’s detention and dehumanizing abuse of immigrants in concentration camps at the border and around the country. pic.twitter.com/rB6U65yTQ4