Jewish humanitarian groups step in, or try to, as crises unfold in Haiti and Afghanistan 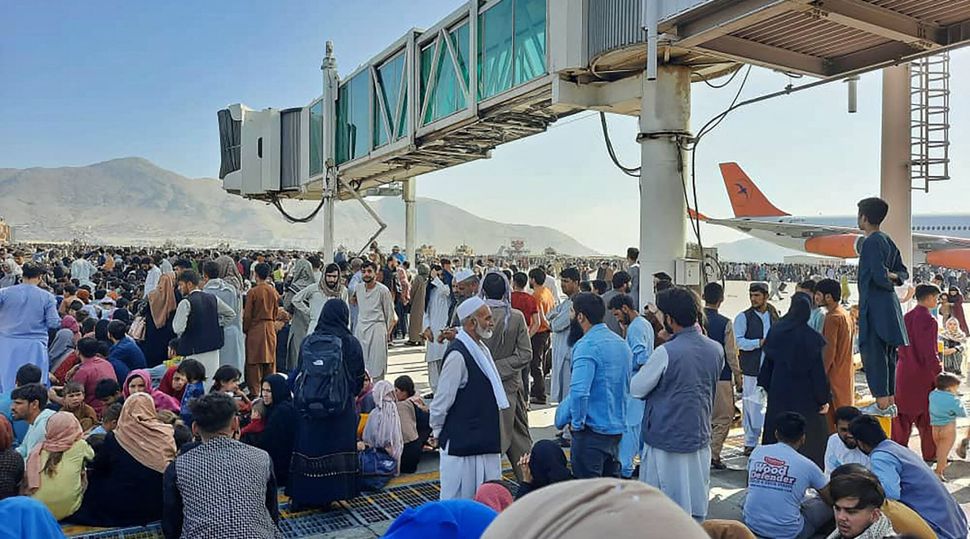 Afghans crowd at the tarmac of the Kabul airport on Aug. 16, 2021, in an effort to flee the country as the Taliban retook control after 20 years. (AFP via Getty Images)

(JTA) — Two major humanitarian crises are eliciting the involvement of Jewish aid organizations, although it is unclear whether much can be done from afar to support Afghans now that the Taliban has retaken their country.

An earthquake struck Haiti early Saturday, killing nearly 1,300 with the death toll likely to rise. Meanwhile, a tropical storm is bearing down on the beleaguered country, which is experiencing political instability and still recovering from a devastating 2016 hurricane and a 2010 earthquake in the capital of Port-au-Prince that left more than 220,000 people dead.

Among the many foreign groups directing aid to Haiti is the American Jewish Joint Distribution Committee, which first engaged with the country in the 1930s, when Haiti was one of just a handful of countries to accept Jewish refugees from the Nazis. The JDC worked to support those refugees.

Now, the group is working with a longtime local partner to send medical supplies to a hospital in the region of Haiti most affected by the earthquake.

“We are heartbroken over the tragic loss of life in Haiti and send our prayers to a people and nation in mourning yet again,” JDC CEO Ariel Zwang said in a statement. “As we have done so many times in the past, we’ll be there to offer care, healing, and opportunities to empower Haitians to build back better and safer.”

The American Jewish World Service, which has long been involved in helping Haitians advocate for human rights, is also raising funds to support relief aid for Haiti.

But when it comes to Afghanistan, where the Taliban has retaken the country just weeks after the U.S. removed troops that had been there for nearly two decades, humanitarian groups have fewer avenues to help. The U.S. and its allies had said they would evacuate people who aided their mission and are likely to face retaliation by the Taliban, but those efforts were proceeding slowly. Now, the speed of the Afghan government’s fall makes their future uncertain.

HIAS, originally the Hebrew Immigrant Aid Society, wrote on Facebook Sunday night that it would work to help Afghans who make it to the U.S. through a special program designed to protect people who aided the U.S. mission there. But there is little more to do at this time, it said.

“Our hearts break for the people of Afghanistan right now. Unfortunately, the current reality is that options for resettlement are limited to the Special Immigrant Visa program,” the group wrote. “We are advocating to change that.”

Meanwhile, it is unclear whether the last known Jew in Afghanistan is still in the country. Zabulon Simantov, 61, stayed in Kabul to tend its last synagogue even after his wife and children moved to Israel; he said earlier this year that, anticipating danger after the U.S. withdrawal, he would move to Israel after the High Holidays next month.

—
The post Jewish humanitarian groups step in, or try to, as crises unfold in Haiti and Afghanistan appeared first on Jewish Telegraphic Agency.

Jewish humanitarian groups step in, or try to, as crises unfold in Haiti and Afghanistan