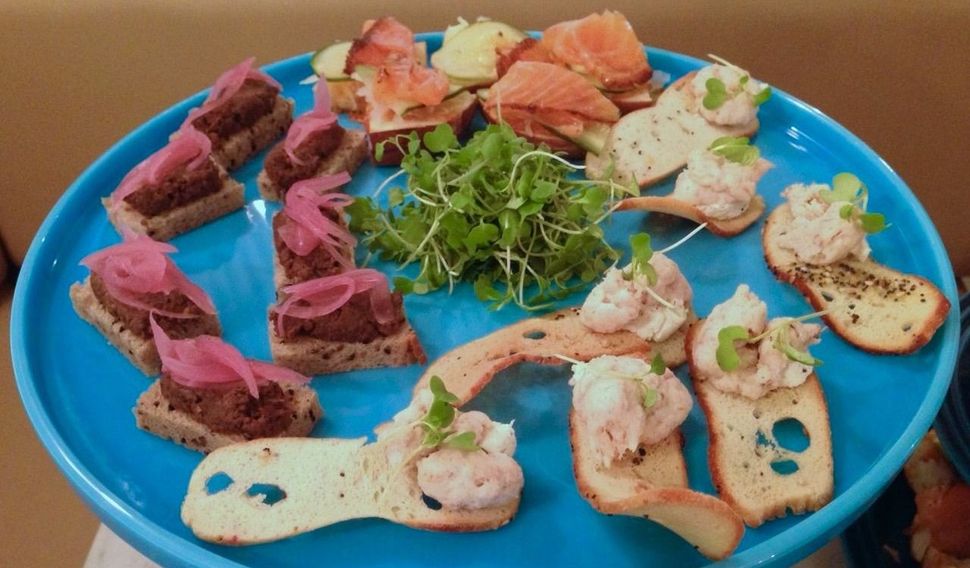 Whatever we called home, it centered around family: the tiny community within a community. This is the story of Jews in America.

On Thursday, November 16, at Russ & Daughters Café at the Jewish Museum, Niki Russ Federman and Josh Russ Tupper shared their home and family story at an event sponsored by the American Joint Distribution Committee (JDC).

Liz Rueven, who blogs at www.kosherlikeme.com, introduced these two cousins, 4th-generation owners of the famous Russ & Daughters appetizing store on New York’s Lower East Side. They spoke about their great-grandfather Joel Russ, who came to New York from Strzyzow, Poland, in 1907 and began his business by selling herring from a barrel on a pushcart, catering to the Jewish immigrants who had settled on New York’s Lower East Side. Pickled fish “was popular among the poor,” Russ Federman said, for reasons of kashruth and because it went a long way. “The first night they rubbed the oil (from the fish cure) on bread and ate it for dinner; the second night they ate the fish.”

Joel Russ opened the Houston Street store in 1920 and taught his three daughters the trade: “They started working when they were about age 12,” Russ Federman said. But, like so many upwardly mobile Jewish families, the next generation went on to become lawyers and engineers or went into other ventures in the American corporate mainstream.

After some time, Mark Federman, a 3rd-generation Russ, decided to pull down his attorney shingle and take over the family business. One of his first and most momentous decisions was to keep the store where it was. Even as the Jewish community had scattered, he “understood the importance of place and realized if you moved the store out of the lower east side it would lose a lot in translation,” Russ Federman said.

Russ Tupper, who was an engineer, joined the family business in 2002. A leftie, he said, “I had to learn to slice fish with my right hand,” because of space considerations at the slicing counter. A few years later, his cousin Niki Russ Federman — Mark Federman’s daughter — joined him at the store.

Together they have forged a new path for Russ & Daughters.

Their first new venture was Russ & Daughters Café on Houston Street, where you can feast on fish but also classic Jewish dishes such as Mushroom Barley Soup, Lox, Eggs and Onions and Babka. They also opened Russ & Daughters Bagels & Bakery in Brooklyn, where all the baked goods in the store and cafés come from. “We wanted authentic, real old-fashioned bagels,” Russ Federman said, “not those modern ones that are as big as your face! And NO blueberries or jalapenos!”

As for the fish, it’s high quality and there are plenty of choices. Although in days gone by most appetizing-store fish consisted of belly lox, Nova and a herring variety or two, “we came into the business long after Scottish and Gaspe and other smoked salmon had become popular,” Russ Tupper said. “And although I’ve seen things like molasses-smoked salmon and a few other new kinds, we are not going in that direction.”

The café and takeout appetizing counter at the Jewish Museum brought other considerations: It had to be kosher (the store and LES café are not). But the cousins have managed beautifully. At the event this week we feasted on devilled eggs with salmon caviar, slices of herring on pumpernickel, two kinds of smoked salmon canapés, vegetarian chopped liver and dollops of whitefish salad served on bagel chips (with wines of our choice: Goose Bay Pinot Grigio, Capcanes Peraj Petita (Monsant) or Herzog Blanc de blanc). All wonderful — and that is no fish tale.

The story of the Russ family is ongoing. Its next venture is a huge space at the Brooklyn Navy Yard, where the business will centralize some of its operations: offices, shipping, the bakery, an event space and a retail counter. Says Russ Federman: “We’re looking down the road not for a few years, but for at least another four generations.”

Ronnie Fein is a cookbook author, food writer and cooking teacher in Stamford. She is the author of “The Modern Kosher Kitchen” “Hip Kosher.” Her food blog is Kitchen Vignettes. Find her on Facebook, [Twitter](http://www.twitter.com/ronnievfein00 and Instagram