Why Breakfast Is Most Jewish Meal of the Day 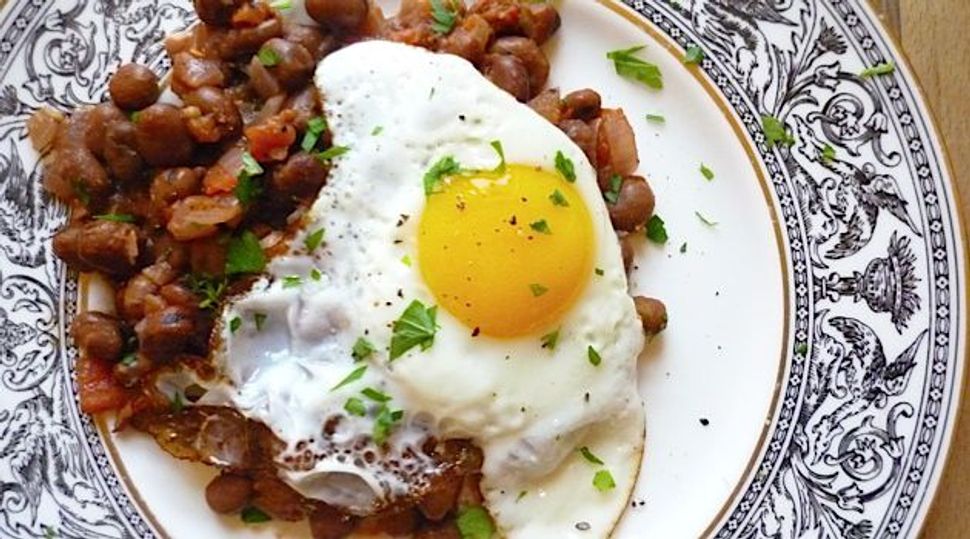 Here’s the formula for a perfect Sunday morning: Take a bagel — preferably seeded — slice it in half, slather it with cream cheese and drape it with paper-thin slices of briny lox, red onion and tomato. Add coffee and The New York Times, and breakfast is complete. While bagels and lox deserve their title as the perfect Jewish morning combo, they tell only a fraction of the story.

As a category, the Jewish breakfast canon tends to get overlooked. My theory as to why this happens is because society’s awareness of Jewish cuisine skews heavily toward the festive foods eaten at the Sabbath dinner and on the High Holy Days. Unlike breakfast, these meals carry ritual and symbolic significance, and they represent the primary times we gather together with family to “eat Jewish.” It makes sense, then, that dishes like chicken soup, hamantaschen and potato latkes, which make regular forays into the spotlight, would be the ones to stick in our memory. Meanwhile, aside from Yom Kippur’s post-fast breakfast-for-dinner spread, virtually no Jewish holidays focus on the morning.

While Jewish breakfast foods are categorically underappreciated, a global look at what Jews eat at the beginning of the day — both during the week and on the Sabbath — actually reveals some of the cuisine’s most interesting and eclectic culinary traditions.

Since I was young, I have always liked breakfast more than other meals. I much prefer to linger at breakfast with a steaming mug of coffee than order another glass of wine after dinner. In the hopes of spreading the gospel of breakfast, here is a global look at some of Jewish cuisine’s best early morning fare. While not comprehensive, it provides ample reasons to roll out of bed, put the kettle on to boil and pull up a chair at the breakfast table.

Yemenite Jewish breakfast means one thing: bread. As a community with few resources, cooks had to find creative ways to turn the same humble ingredients into different recipes. Two of their primary morning dishes, jachnun and malawach, are made from a flaky, puff pastrylike dough called ajin. Jachnun is traditionally rolled into tight cylinders, baked overnight in a very low oven (today some people use a slow cooker) and served warm for Sabbath breakfast. Malawach, meanwhile, is fried in a skillet, like flat, savory French toast, and topped with fresh tomato sauce and the hot chili paste s’chug. A third Yemenite breakfast bread, kubaneh, is made from a yeasted dough that gets steamed in a covered pot overnight at very low temperatures until it puffs and grows tender and dense. It was traditionally served on Sabbath morning with hardboiled eggs and butter.

My husband’s friend Gilad, whose family is Yemenite, served me my first taste of jachnun several years ago. As delicious as it was, I remember finding it strange and gratuitous to indulge in oily dough before 9 a.m. Then I remembered doughnuts and croissants, and I stopped judging.

Americans may be addicted to sugary cereals and calorie-laden muffins, but Jews of all backgrounds have the real breakfast sweet tooth. Ashkenazi Jews identify rich confections like streusel-topped coffeecake and sweet cream cheese Danish pastries as acceptable morning food. Slices of leftover babka — the buttery chocolate- or cinnamon-swirled loaves loved by Eastern European Jews — are toasted for breakfast or nibbled on before synagogue. In his Encyclopedia of Jewish Food, author Gil Marks rightly call babka, “a sort of intense cinnamon bread.” Sephardic Jews, meanwhile, eat sweet rice pudding flavored with citrus zest and cinnamon in the morning. It may sound unusual, but it is not so different from oatmeal topped with maple syrup. 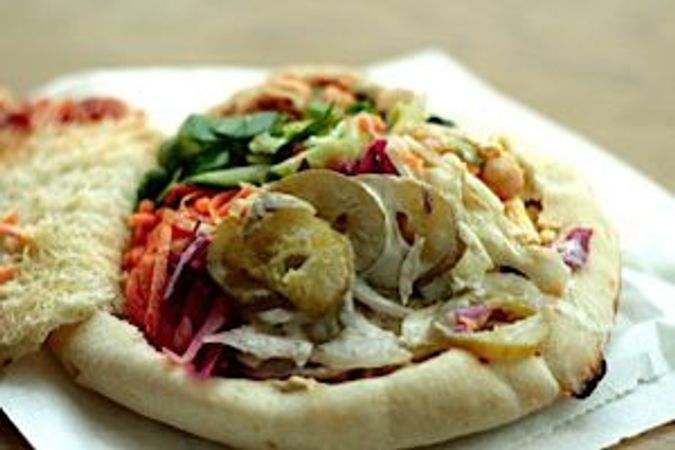 Before the Egg McMuffin, there was sabich. Marks writes that the dish’s name is likely derived from the Arabic word for “morning,” sabah. On Saturday morning, Iraqi Jews eat a sandwich made of fried eggplant, hardboiled eggs, chopped vegetable salad, tahini and a pickled mango condiment called amba. The mixture is wrapped in a flatbread called laffa, or pita. In Israel, which has a significant Iraqi Jewish population, sabich has become a popular street food, eaten throughout the day. 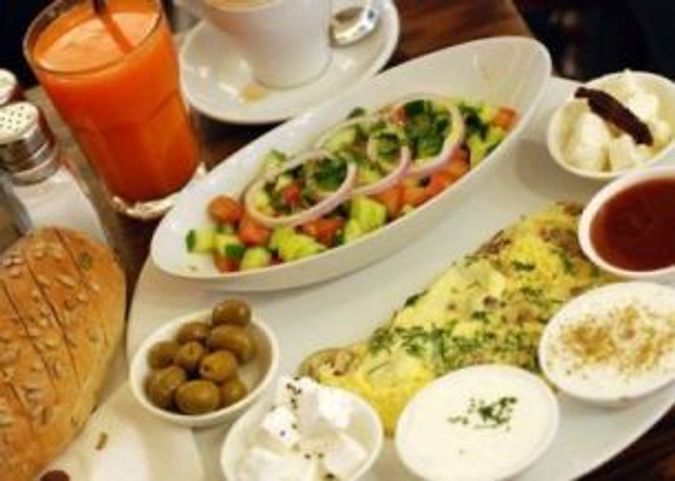 The first time I visited Israel, I arrived expecting to be wowed by the blue of the Mediterranean, the bustling vegetable markets and the historic majesty of the Western Wall. What I did not expect were the hotel breakfasts — dizzying spreads of white cheeses and fresh labneh, Middle Eastern yogurt; hardboiled eggs; brined olives and pickles; smoked fish; freshly squeezed orange juice; just-baked bourekas, breads and pastries, and a multitude of jams to go with them. These breakfasts are always balanced with myriad colorful chopped salads. “We are the only people on the planet that eat salad for breakfast,” Israeli food writer Janna Gur said. “I start my day with a freshly chopped vegetable salad… for Israelis, that’s completely natural; that is what we eat for breakfast.”

According to Gur’s “The Book of New Israeli Food,” these morning feasts have a humble origin: the kibbutz. She writes, “Kibbutz workers, who began their day in the fields before dawn and were ravenous by 7 a.m., gathered in the communal dining room for a hearty breakfast of whatever fresh produce was on hand…. When the first luxury hotels opened in the 1950s, they adopted the kibbutz breakfast and turned it into a lavish buffet” — minus the mandatory fieldwork, of course. Over time, Israel’s hotel breakfasts have become a notable incentive to visit the country. As Joan Nathan writes in “The Foods of Israel Today,” even first lady Eleanor Roosevelt was “amazed and pleased” by the unique breakfast she ate at the Dan Hotel in Tel Aviv in the late 1950s.

Mornings at the Deli

Delicatessens are best known for their towering pastrami sandwiches and for their oversized matzo balls swimming in chicken soup. But the deli has also helped bring two breakfast icons out of the Jewish home kitchen and into the public eye. The first is the Leo, a mix of lox, eggs and onions. The onions are cooked in oil or schmaltz until golden and sweet, and are combined with fluffy scrambled eggs and copious bites of salty lox. Served alongside fried potatoes, toast or a bagel, the Leo is delicious and distinctly Jewish.

The other classic deli breakfast dish is matzo brei, Passover’s take on French toast, made with matzo dipped in egg, fried until golden and topped either with salt or with cinnamon and sugar. Thanks to the delicatessen, matzo brei transformed from an annual Passover treat to a year-round morning staple. Khremzlekh, matzo brei’s pancakelike cousin made with matzo meal, sadly never got the deli treatment and remains in the category of holiday fare.

In Israel, which has a significant population of immigrants from North Africa, the Maghrebi dish of eggs poached in piquant tomato sauce called shakshuka can be found in nearly every cafe. In Tel Aviv, people line up at the legendary restaurant Dr. Shakshuka as if it were the best pizza peddler in Naples. Shakshuka is typically served family style in a large skillet with pita bread on the side. The pita is used to mop up the runny yolks and any flavorful sauce left behind. While it is hearty enough to eat later in the day, and often served for dinner, Marks writes that in Maghreb, “shakshuka became a popular working person’s breakfast.” Today, the dish is slowly making its way into America’s egg-obsessed breakfast lexicon. I like to think of it as the Middle Eastern answer to huevos rancheros. 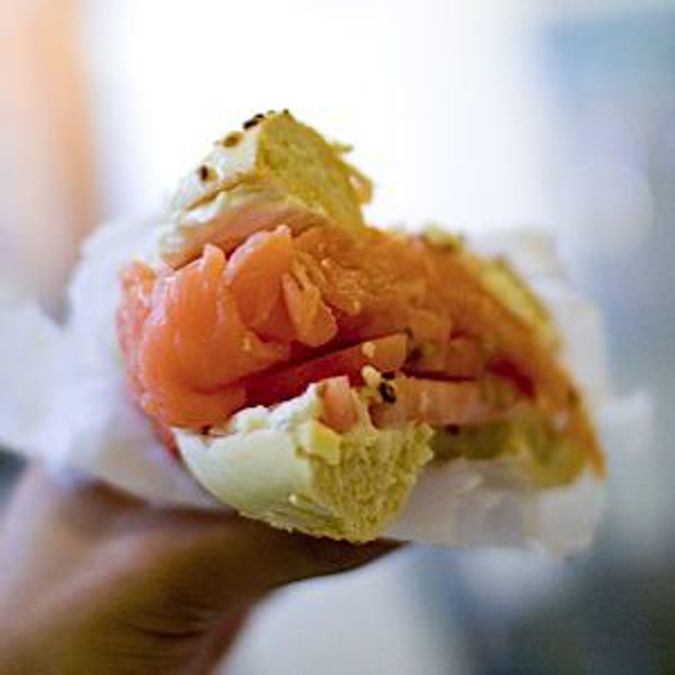 America’s traditional Grand Slam breakfast, which typically includes bacon, sausage or ham, reflects this country’s love affair with meat. But for Jews with Eastern European heritage, the focus has always been fish — especially pickled herring, which in the 18th and 19th centuries was eaten on black bread all day, beginning in the morning, and eventually became staple of the Kiddush spread that served as a de facto late breakfast after Saturday morning Sabbath services.

The Jewish fondness for fish in the morning accelerated in America as “appetizing” shops began to populate New York City in the early 20th century. Customers jostled at the counter of these shops to stock up on breakfast staples, from smoked sable to belly lox and whitefish salad. According to historian Arthur Schwartz’s book “New York City Food,” New York is also where cured lox and cream cheese first met the bagel (probably also in the early 20th century), forming a breakfast partnership for the ages.

Some Jews find the tradition of eating strong-smelling fish in the morning antiquated or distasteful. Journalist Shira Klapper writes in Tablet magazine about her childhood horror at witnessing her father’s Saturday morning ritual of consuming “three or four pieces of pink, shimmering, oily herring, which would slide and wriggle onto his plate as if they’d just been plucked from the chilly waters off Scandinavia.” But thanks to my generation’s fascination with our cultural roots, it is slowly making a comeback. Later in the same essay, Klapper reveals that as an adult, she now joins her father in his weekly herring breakfasts.

In Egypt, beans rule the breakfast table. In “The Book of Jewish Food,” Egyptian-born writer Claudia Roden calls ful medames, a saucy stew of simmered dried fava beans topped with fried or hardboiled eggs, “the famous Egyptian national breakfast.” It is an ancient meal that continues to be eaten today. Traditionally, she writes, Jews would “bring pots of beans and eggs to the public baths and leave them in the ashes of the fire [and] retrieve them on Saturday morning” to eat for breakfast. Hearty, satisfying and delicious, made the night before and reheated, ful medames has become one of my go-to breakfast or breakfast-for-dinner meals.

Leah Koenig, the Forward’s monthly food columnist, is a writer and cookbook author. Her new book, “Modern Jewish Cooking,” will be published in 2015. Contact her at [email protected].

Why Breakfast Is Most Jewish Meal of the Day