Mourning? Have Some Kugel. 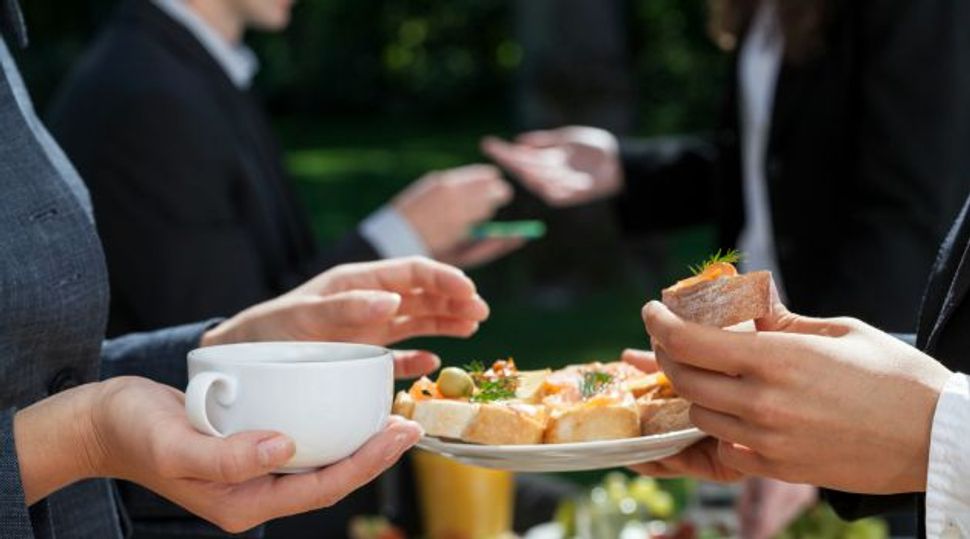 As Jews around the world gathered to celebrate Hanukkah last month, traditional foods such as latkes, sufganiyot, sfinge and other deep-fried delicacies lined our dinner tables. Today, modern Jewish food is celebrated as more than just the krepelach and pickled herring from Eastern European kitchens. It is recognized as a rich cuisine of diverse cultures from a wide array of countries.

Spices and recipes from Morocco, Tunisia, Syria, Lebanon, Iraq and Eastern Europe have produced a multi-ethnic mish-mash of tastes that make up Jewish cuisine and tell the story of a wandering and displaced people. More than anything, Jewish food has become part and parcel of Jewish tradition, in both secular and religious homes throughout the world on holidays and other special occasions. Shabbat cholent or Passover charoset or Zadie’s gefilte fish have turned festivities into events for both the stomach and the soul.

But there’s another Jewish connection to food that’s associated with something darker, which has yet to be turned into a best-selling book by Janna Gur or Einat Admony. Israeli gastronomes rarely discuss it, though it’s a significant aspect of Jewish food culture that strengthens Jews around the world in their greatest times of need: the connection Jewish food has to death and mourning.

If you Google “Jewish mourning and food,” your search engine will list “condolence basket” websites and e-how pages on what kinds of foods to eat and how to prepare them for Jewish funerals. In Judaism, family and friends of the bereaved traditionally take on the responsibility of providing for mourners by taking care of their basic needs. It’s customary for the bereaved to abstain from performing the tasks of everyday life, including cooking and preparing meals, during the shiva period. Therefore, the community takes this on as part of its responsibility, as a way of consoling the mourners.

Empathy, in other words, is often demonstrated in the form of the best home-cooked foods. When I experienced a death in the family two years ago, I came to understand this first hand. Our friends and neighbors created a Michelin-star restaurant for those very depressing and difficult seven days.

“I made you my chraime!” my mother’s friend Etty yelled out as she burst into our home with a pot of Moroccan-style fish in spicy red sauce.

“I got up at 5 a.m. to fry two dozen schnitzel,” another of my mother’s friends, Sharona, whispered to my girlfriends. “Well I made the shpetzel in cream sauce — the kind that Tal loves,” another friend said.

And on it went, each day, like some bizarre food drive or nightmarish bake-off. Our dining room table was constantly filled with endless amounts of carbs — freshly baked rugelach, homemade sesame bourekas with feta cheese and bundt cakes were neatly placed on our kitchen counter, to be brought to the table when the supply got low. An assortment of Nespresso flavors, “butz” or black Turkish coffee, with your choice or cream or milk, was available at every hour of the day.

This November, at the annual yahrzeit, friends who came to pay their respects hugged me tight on their way out. “That cheese and spinach kugel was out of this world. I need that recipe!” one said.

“Who made the broccoli pie with pine nuts? So creative,” another mentioned to my mother.

While food is such an enormous part of Jewish life and culture and is typically associated with smachot (happy events) and holidays, there is an important place for food in sad or difficult occasions too. The reason for this is the comfort and consolation we find in eating and knowing food has been prepared for us. Looking back at my family’s experience, I can honestly say that without family friends fighting over who could make the best kugel or whip up the best batch of brownies, our mourning period would have been that much more difficult. It wasn’t easier because we ate all of this food — I’m not sure we ate much at all — but the fussing and the special attention definitely helped.

To me, the mitzvah of nichum aveilim, comforting the mourner, is exactly that — the fussing. I even imagine that it saves many people from slipping into severe depression after losing a loved one.

Fussing never hurt anyone, and neither did eating.

Mourning? Have Some Kugel.