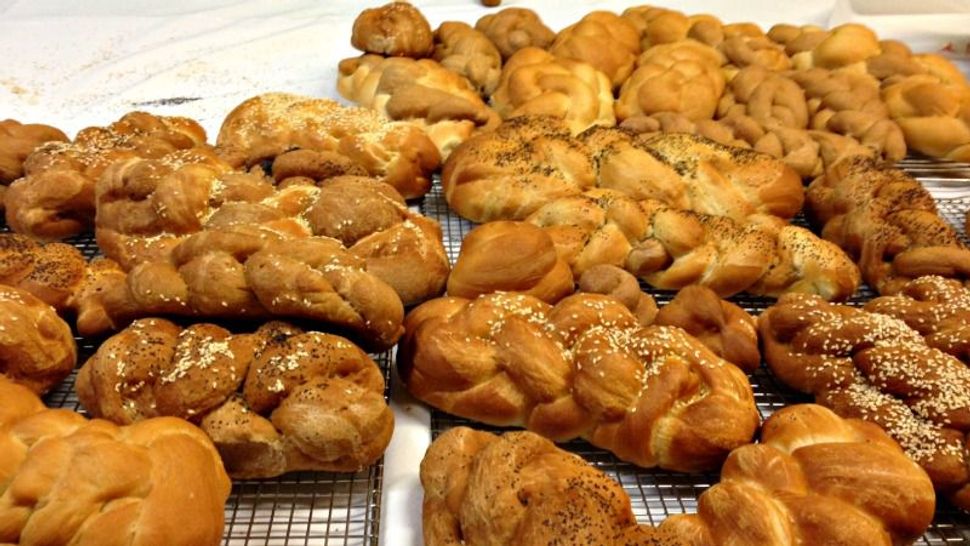 On a chilly December morning, dozens of people gathered around bowls of dough, ready to bake. What brought us there was the at the Isabella Freedman Jewish Retreat Center in Connecticut, and more specifically, a workshop entitled “Yeast of Eden: Baking Vegan Challah and Bagels Sustainably & Ethically.”

Rabbi Jonathan Rubenstein, co-rabbi of Temple Sinai in Saratoga Springs, New York, and founder of Slice of Heaven Breads, kicked off the session with a moment of mindfulness. He and a participant each pulled aside the plastic wrap covering the bowls and took a ball the size of a walnut.

“Imagine each ingredient,” Rubenstein said to the group as he held his sphere. “There’s a universe being created in each of these bowls.”

Like many other participants, I closed my eyes, breathing the raw scent of yeast wafting from beneath the covering. The rabbi invited us to think of the flour, the salt, the maple syrup, the yeast, and finally the water that went into the bread.

Then he led us in the blessing for taking challah and set the pieces aside. Next, (while some of us practiced bagel rolling) we tried our hands at braiding the celebratory bread.

This challah contained no eggs. In fact, it was vegan. The biggest revelation for me here was not that a dough free of animal products could produce a fragrant, satisfying loaf — I’m lucky enough to live in the city of The Soupergirl, which carries vegan challah from Breadsmith. (And not all challahs contain eggs anyway). No, my major takeaways were about braiding.

First, I learned that bakers didn’t invent intricate braids to show off — or make me look like I have two left thumbs. (I admit, I’ve wondered if that were the case while looking down at a tangle of dough on my counter at home. Creating a universe? Mine looked more like a meteor explosion.)

The real reason for many-stranded challah, I learned from Rubenstein, is that loaves woven with four, five or six strands have height, while a three-strand loaf is flat and not as fluffy. A gateway step for the feint of heart is what Rubenstein calls a “double triple” — a large three-strand braid with a smaller one stacked on top.

So I decided braiding was worth another try.

That led to my second revelation, which is that weaving dough isn’t as complex as it seems. Rubenstein’s six-strand system is actually quite simple. It has to do with creating two “wings” and moving one wing into the center. Then you “replace the wing.”

Watch the video to see the technique in action.

As Rubenstein says in the clip, “the only way to learn how to do it is to do it — repeatedly.” Now I’m convinced that with some practice and thought, anyone can produce a plump, delicious loaf — without eggs or confusion.

Here is Slice of Heaven’s recipe for vegan challah. It can be made with or without flax seeds, which give the loaves more of an eggy quality.

For whole wheat challah: Replace some of the unbleached white flour with whole wheat flour, according to your taste. Slice of Heaven uses 5 to 6 cups whole wheat flour and 2 to 3 cups white, and replaces the sugar with locally produced maple syrup. If using maple syrup, reduce the amount of water by ¼ cup.

1) Mixing the dough. If using flax seeds, add them to the water and stir. Let stand at least 30 minutes or overnight. Heat water and flax seed mixture until warm, but not hot. If using active dry yeast, add yeast, let stand for a few minutes. Add the rest of the ingredients, and then start adding flour. Continue to add flour until the dough is too stiff to mix in the bowl.

2) Kneading. Spread some flour on the countertop, turn dough onto counter, and start kneading. Continue kneading and adding flour until the dough is not sticky but not too dry. This should take about 10 minutes.

3) First Rising. Very lightly grease a bowl with oil, form the dough into a smooth ball, place the dough in the bowl smooth side down and rotate so the dough is coated with oil on the top and bottom. Cover the bowl with plastic wrap or a damp dishtowel. Let the dough rise about an hour, or until doubled in size.

4) Forming the Loaves. (This is when the six-strand braid video above or others in the Slice of Heaven collection come in handy.) Deflate the dough and gently form into a smooth ball again. Divide the dough into three parts for large loaves or four parts for smaller ones. Then divide each loaf into the desired number of strands. Roll each strand individually, then join the top ends and pinch together.

5) Second Rising. Grease a baking sheet or line it with parchment paper. Place the loaves on the baking sheet, leaving a few inches between them for rising. Cover with plastic wrap or a damp dishtowel. Let rise until doubled in size, 30–40 minutes. Preheat oven to 350˚ F.

6) Glazing and Baking. Mix a few tablespoons water with ground flaxseeds. Using a pastry brush, glaze the top of each loaf. Sprinkle the loaves with poppy or sesame seeds if desired. Bake the loaves for 30–35 minutes until golden brown and the bottom of the loaves sound hollow when tapped.

Adapted from a recipe from Jonathan Rubenstein. Find out more about Slice of Heaven Bakery and the Bread and Torah Project at BreadAndTorah.org

Rhea Yablon Kennedy teaches at Gallaudet University and lives in Washington, DC. Follwer he on Twitter @RheaYKennedy. Her website is RheaKennedy.com.