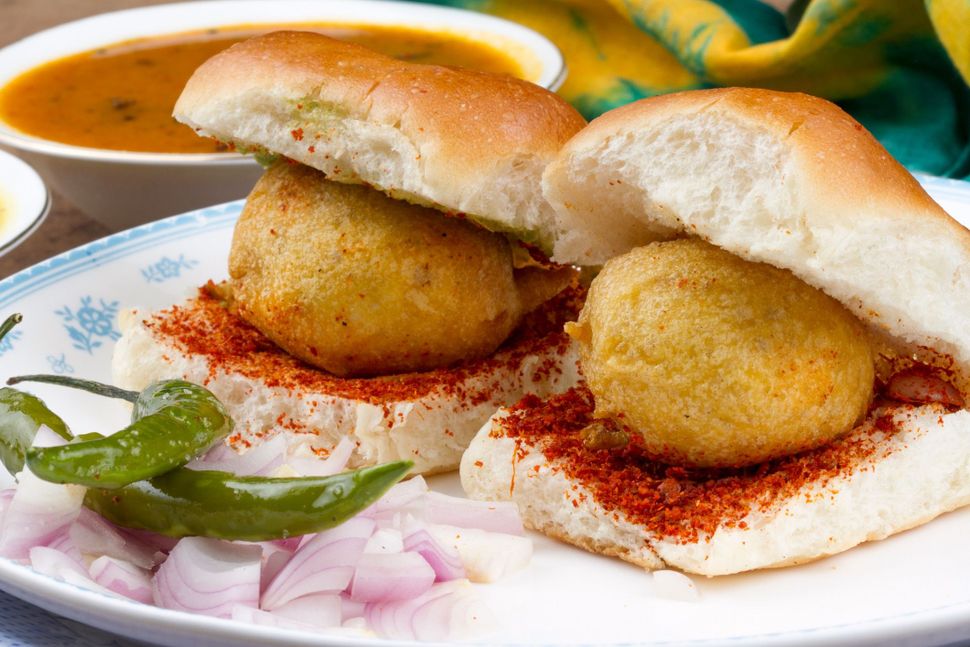 Vada Pav: Fried potato dumplings, a popular street food in Mumbai, can be served with or without the bun as a spicy alternative to potato pancakes at Hanukkah. Image by iStock

I had only two days left in Mumbai before flying back home to the U.S. (with a few days layover in Tel Aviv, where I was born and raised). I had pretty much checked off all the boxes on my Jewish-Indian heritage discovery trip to India. I’d visited almost every single active synagogue in this chaotic, yet somehow familiar, city of 20 million, which my parents called home until their 20s when they emigrated to Israel.

My list of Mumbai food musts, on the other hand, still remained a mile-long — with so little time left to explore.

Swati Snacks, a super hygienic, vegetarian Indian street food restaurant, was where I was going to “quench” my Mumbai street-food “thirst.” (I wouldn’t brave the street-food carts and stalls in order to satisfy my cravings.)

Swati Snacks is located in south Mumbai, not far from the awe-inspiring Mani Bhavan, Gandhi’s Mumbai headquarters and residence-turned-museum. Little did I know that I would go back to Swati for every meal of my remaining 48 hours, over order each time, and still yearn for more.

At Swati Snacks I ordered the quintessential Mumbai street food, the vada pav. A potato dumpling made with lightly mashed potatoes, the chunky mash is spiced with turmeric, fresh curry leaves, black mustard and cumin seeds, along with cilantro and green chili pepper, then it is dipped in chickpea flour batter and fried. The fried dumpling is then plopped on a Parker House-like roll and slathered with green- and red-pepper chutneys. The result is a dish of sinful mini “sliders” — carb on carb action — served as a trio.

It remains a mystery to me why I haven’t included the vada pav, a seemingly obvious Indian substitute for the Ashkenazi latke, in my eclectic, Indo-Mediterranean Hanukkah-gathering menus! (Though the thought always crosses my mind when December comes around each year.) 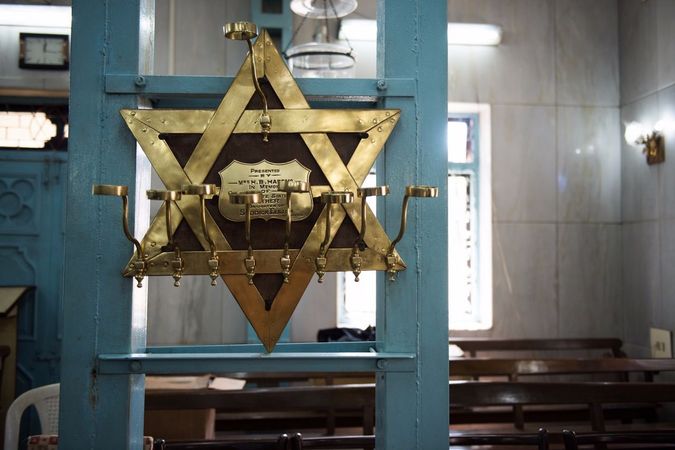 The oil menorah at Tiphaereth Israel Synagogue in Mumbai. Image by Shulie Madnick

Batata vadas are made year-round. Traditionally at home they are served just as dumplings (batata vedas) without the buns (pavs). Although it’s not a traditional Jewish Indian Hanukkah dish, I am surprised it wasn’t adapted as one when the community learned about the holiday.

Hanukkah came to the Bene Israel (Sons of Israel) Jews in India (who were isolated from the rest of the Diaspora) much later than to other Jewish communities around the world, since they left Israel before the rededication of the 2nd Temple. They only had the first five books of the Bible, not the writings after.

Christian missionaries, in failed attempts to convert the community, and a Malabari (Cochini) Jew named Rahabi, were fundamental in teaching the Bene Israel Jews Hebrew and “modern Judaism.” There are several accounts of Rahabi’s arrival within the Bene Israel, but the date of his arrival is unknown, with accounts ranging between 1100 BCE and the 18th century.

A Family Recipe For Vada Pav

(An Indian, gluten-free, spiced potato dumpling in chickpea batter on a bun)

This deep-fried spiced potato dumpling in chickpea batter is called batata vada when served without a bun — as it commonly is when made at home — and vada pav when served with a bun, when eaten as street food. Specialty ingredients such as black mustard seeds and curry leaves can be found at your local Indian grocer or online.

1) Cover potatoes in cold tap water and bring to a boil. Once boiled, reduce the heat immediately to low/medium heat and let the potatoes boil on a low bubble, covered, for 20 minutes. Drain the potatoes into a large bowl and mash to a coarse consistency.

2) Heat 2 tablespoon of oil in a frying pan on medium to high heat. Add the green chilis and let them soften for a few minutes while mixing occasionally. Add them to the potato mash with as little oil as possible from the pan.

3) Add a tablespoon of oil to the frying pan and toss in the curry leaves. They will crisp immediately. As soon as they crisp add them to the potato mash with as little oil as possible from the pan.

4) Add the remaining tablespoon of oil to the frying pan, then add the mustard seeds. They will sizzle and start popping, at which point immediately add the cumin seeds and cook for a few seconds longer while stirring. Add the seeds and oil to the potato mash.

5) Add the turmeric, red chili pepper, salt and cilantro to the potato mash, mix well and let the mash cool down to room temperature.

6) Form approximately 12 even balls out of the mashed potato mixture. Cover and keep refrigerated if not frying immediately.

7) When you are ready to fry, heat up the oil and make the chickpea flour batter.

8) In a bowl mix the chickpea flour, water, turmeric and salt into a thick pancake batter consistency. Strain the batter through a mesh strainer.

9) To test the oil, drop ½ a teaspoon of the batter into the oil. If the strands of batter float up immediately, the oil is hot enough.

10) Dip and coat each ball with the chickpea batter and gently drop into the hot oil. Do not over-crowd the frying pan. The dumpling should float to the top. If the first dumpling sticks to the bottom, try to release it gently with a narrow stainless steel spatula. Flip the dumpling to the other side with a strainer or a skimmer. Fry for approximately 4 minutes total or until golden on both sides. Take out with a large strainer or a skimmer onto a paper towel lined plate.

11) Throughout the frying process skim the excess batter that floats around from the oil. You can strain it and place on a paper towel-lined plate and use it as a crunchy layer on the bun, or mix it in with the red chutney below.

12) Serve immediately on a bun with green and red chutney and layer with crunchy chickpea batter bits or let cool and refrigerate in a Tupperware for up to two days before reheating.

2) Place the dumplings on a foil-lined cookie sheet, tent them loosely with another piece of foil and bake for 10–20 minutes. In the last 2–3 minutes, take the top foil off so that the batata vedas get crisp.