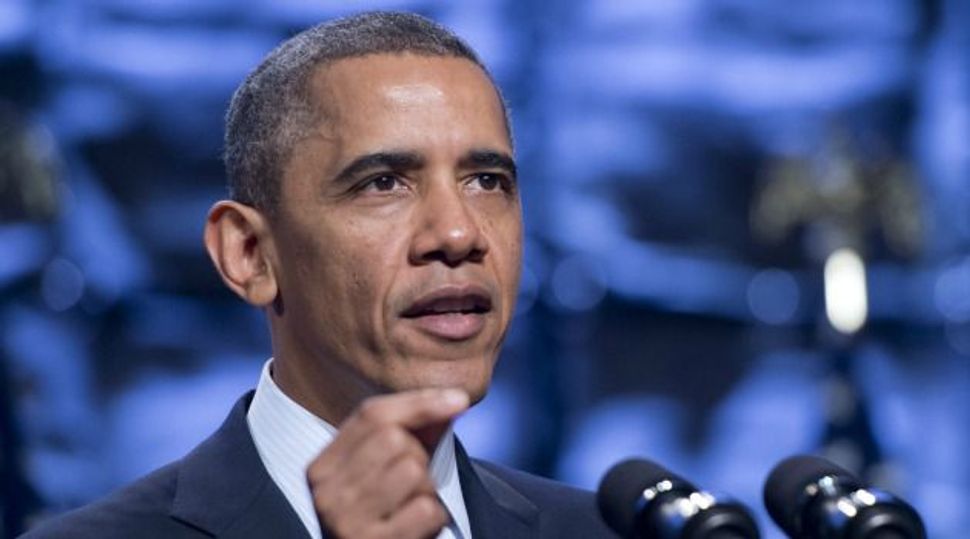 Muddy Waters: Some Jewish groups have given the White House two months to work on a dialogue with Iran over its nuclear weapons program. Or have they? Image by getty images

A closed-door meeting meant to iron out differences between the Obama administration and the Jewish community on Iran has instead exposed previously unseen cracks in the wall of unity that mainstream Jewish groups have maintained on the issue.

Emerging from the October 29 White House meeting, the Anti-Defamation League decided to break ranks with other mainstream Jewish organizations and accept the administration’s view that new sanctions against Iran should be put on hold for a couple of months to give ongoing negotiations with Iran a chance. Other participants, including the American Israel Public Affairs Committee, which carries the most lobbying weight with Congress, turned down the idea.

Officials from the administration side and from Congress argued that the apparent rift would have little significance in the battle to get the Senate to pass new sanctions against Iran over the administration’s objections in the near future. On that front, several officials agreed, the pressure from pro-Israel advocates has yet to reach a level likely to overcome the administration’s stand.

“There is no real change in activity,” one Senate staff member observed. Another noted that pro-Israel advocacy for passage of new sanctions does not seem to exceed the lobby’s “regular level of activity.”

The officials would speak only on condition of anonymity so that they could comment candidly about the ongoing lobbying without fear of consequences from either side of the struggle.

These and other sources also noted that while AIPAC is still making the case for pushing the legislation out of the Senate Banking Committee, it has not mobilized its supporters to lobby for the bill in a way seen only weeks ago, when it pressured Congress, unsuccessfully, to authorize the use of military force against Syria

The October 29 meeting was called as part of broad administration strategy — described by one insider as a “blitz” — to garner support for a pause in pressure on Iran while the United States and other members of the international community try to reach a diplomatic deal with the Islamic Republic. The United States and other member countries of the United Nations Security Council, along with Germany, are currently negotiating with Iran to curb its nuclear program, which many believe Iran is using to develop nuclear weapons. The Iranians deny this.

Other elements of the administration’s campaign for a moratorium on further sanctions included a plea to senators by administration officials, including Treasury Secretary Jack Lew, not to bring, for now, a bill to the floor of the Senate that would slap new sanctions on Iran’s financial system in addition to those already in place.

In an October 28 speech to the Ploughshares Fund, a nonproliferation group, Secretary of State John Kerry also warned against “fear tactics” deployed by those opposing negotiations with Iran. Kerry’s comments were seen by some in Israel as a veiled swipe at the hard-line position taken by Israeli Prime Minister Benjamin Netanyahu. An administration official said it was actually aimed at senators seeking to narrow the administration’s negotiating room.

Around the same time, as if the administration sought to assuage even as it chided, Defense Secretary Chuck Hagel reassured Bloomberg News columnist Jeffrey Goldberg in an exclusive interview that America’s goal was still to prevent Iran from going nuclear. Hagel furthermore credited Netanyahu’s military threats against Iran as a factor that had pushed Tehran to the negotiation table.

At the October 29 meeting, administration officials, including National Security Adviser Susan Rice and the chief negotiator with Iran, Wendy Sherman, briefed Jewish leaders on the status of talks with the Iranians. According to officials briefed on the talks, Rice and her colleagues stressed that diplomacy held out the best prospect for resolving the Iranian nuclear crisis. The administration officials were said to have argued that imposing new sanctions while talks continue could send the wrong message and make it difficult for Iranian President Hassan Rowhani to sell a deal to the more conservative religious leadership in his country.

The administration would not provide any details regarding the content of the discussion held with Jewish leaders. National Security Council spokeswoman Bernadette Meehan told the Forward that as a matter of policy the administration is not suggesting an “open-ended delay” for new sanctions. “At the same time, we believe it is important for Congress to reserve its ability to legislate for the moment when it’s most effective.” This would give the negotiations “the best chance to make real progress in achieving our shared goal of preventing Iran from obtaining a nuclear weapon,” she said.

Meehan emphasized that the window for negotiations is limited. “If progress isn’t made, there may be a time when more sanctions are, in fact, necessary,” she said.

According to an administration official briefed on the talk, “there was no direct ask” in the meeting — meaning, no overt request to suspend Jewish lobbying for increased sanctions. But the official noted that the Obama administration’s wish to put off new sanctions on Iran was clear to all.

“They know how to send the message in a sophisticated way. It’s not the 2009 administration, it is 2013,” the official said, alluding to the Obama administration’s early days, when communication with the Jewish community was bumpy.

Following the meeting, which included representatives of the Conference of Presidents of Major American Jewish Organizations, AIPAC, the ADL and the American Jewish Committee, both sides issued statements that avoided the question of further sanctions. The Presidents Conference, in its statement, described the meeting as a “constructive and open exchange.”

But shortly after this, a leak published in the Israeli daily Haaretz, and later a public statement by the ADL’s national director, Abraham Foxman, made clear that the groups left the White House with different positions. In an about-face on the ADL’s previous policy, Foxman expressed his willingness to allow a two-month moratorium on new legislation. The ADL leader declined to be interviewed for this article.

AIPAC responded with an unusual public statement, issued on a Saturday, when most Jewish groups refrain from activity. In it, AIPAC President Michael Kassen emphasized that the lobby “continues to support congressional action to adopt legislation to further strengthen sanctions.”

“There will absolutely be no pause, delay or moratorium in our efforts,” the statement vowed.

The AJC’s executive director, David Harris, joined this position, writing in an op-ed that pressing on with new sanctions would “send a clear signal that, while the U.S. is prepared to negotiate earnestly, as long as there is no clear evidence of Iran’s change of behavior, the sanctions will continue to be tightened.”

The Jewish groups’ differences could be explained, to a certain extent, by the divergent nature of their internal needs and constituencies.

The ADL arrived at the meeting during a week in which its strong ties with the administration had just been highlighted. The group’s centennial anniversary, celebrated at a hotel in New York, featured two top Cabinet members giving their first public addresses to the Jewish community: Hagel and U.N. Ambassador Samantha Power. It was a show of good will by the Obama administration, following a tough patch in relations with the ADL during the debate over Hagel’s nomination as defense secretary.

AIPAC, on the other hand, has little room to compromise or to show flexibility on Iran. For more than a decade, it has made defeating Iran’s nuclear ambitions its key objective. This has attracted to its membership rolls a base of hardcore supporters and donors who, while varying in their approach to the Israeli-Palestinian issue, share a very hawkish view on Iran. The issue, and AIPAC’s stand on it, have become the lobby’s primary raison d’etre, leaving it little wiggle room.