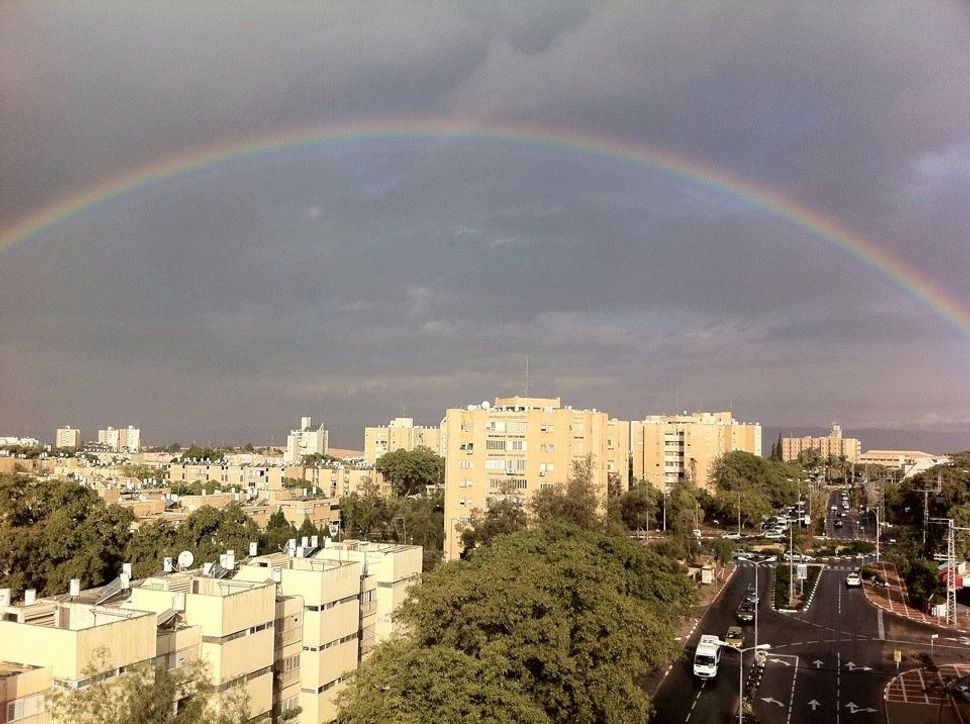 The city of Arad, Israel Image by PikiWiki

JERUSALEM (JTA) – Many Jews who move to Israel only have eyes for Tel Aviv or Jerusalem.

Whether it’s Tel Aviv’s wealth of startups, sunny beaches and culture, or Jerusalem’s history and religious life, newcomers want to be where the action is. But neither city is cheap. Tel Aviv is one of the most expensive in the world, and Jerusalem, increasingly crowded, isn’t far behind. Tel Aviv’s housing prices have risen faster over the past decade than any other city in the world.

So last week, nearly 400 new and newish immigrants, mostly religious Jews from North America, turned up at a Jerusalem conference to explore moving to Israeli cities and towns farther afield. Representatives of 40 locales offered spiels and deals. The overarching message at the “communities fair” run by the Jewish immigration promoter Nefesh B’Nefesh was simple: Life is cheaper and better elsewhere.

“We did this in order to expose the olim to the fact that there are numerous opportunities in Israel,”  said Rachel Berger, Nefesh B’Nefesh post-aliyah maven. “There is so much more, and it’s greater than what you know.”

Last year, 76 percent of the immigrants her organization worked with settled in the populace center of the country, with easy access to Tel Aviv and Jerusalem, and 24 percent went to the more remote north and south.

“Outside of the center of the country, you have less expensive housing. You have lots of green,” Berger said, “and you have a sense of community.”

In the lobby of a Jerusalem hotel last Monday, conference attendees moved among tables set up by representatives of the communities from across Israel and exchanged stories about life as an immigrant to the country. Many had landed in Tel Aviv or Jerusalem and were looking for more affordable places to start or expand families.

The conference was part of a joint initiative called Go Beyond by Nefesh B’Nefesh and Israel’s Jewish National Fund to promote Jewish settlement in the periphery as well as Jerusalem.

Katie and Joe, a North America-born couple in their late 20s, met and married in Israel several years ago. They said they plan to have children, and are just about fed up with their cramped apartment in this city.

“We have a community in Jerusalem where like all our friends are there, but it’s just not sustainable because we all live in like two-bedroom apartments,” said Joe, who asked that he and his wife not be identified by their last name. “Nobody wants to live like that for the rest of their life.”

“I don’t know anyone who can afford to buy in Tel Aviv or Jerusalem,” Katie added. “Even to rent, everyone is trying to find a deal. It’s just hard.”

In Tel Aviv, the average three-bedroom apartment costs nearly $1 million, and the cost of housing has more than doubled in the past decade.

And that’s in a country where the cost of living is already more than 50 percent higher than the average among the 35 countries in the Organization for Economic Cooperation and Development, and a home costs more than 12 years of pay on average.

But outside the big cities, and even more so in the north and south of the country, money goes a lot further.

According to Nefesh B’Nefesh, homes can be had in Katzrin, a town in the Golan Heights, or Arad, a small city near the Negev capital of Beersheba, for a fifth of the price per square foot in Tel Aviv, a fourth of the price per square foot in Jerusalem. Nefesh B’Nefesh and the government also offer special financial incentives to some who choose to live in Israel’s so-called periphery, or non-central regions.

While the community representatives, including many veteran olim, were quick to talk up their community’s affordability, they also touted what they said were other benefits of small-town life.

Avigail Buki, a Montreal native, was representing Katzrin. She said she and her husband paid just over $400,000 for a 1,500 square-foot-house with a backyard overlooking the Sea of Galilee. But she said what really drew them to the community was its tight-knit religious atmosphere, natural surroundings and good Orthodox Jewish schools for their children.

“Had we chosen somewhere else, we would have to move because Katzrin was exactly what we needed,” she said. “People don’t lock doors there.”

Buki’s husband, Yaron, acknowledged that there are also downsides to living in the periphery. He noted that it can be an hours-long commute to the center of the country, where many of the best jobs are based, and there are relatively few English speakers to talk to. Also, he warned, Katzrin is one of the few places in Israel where he could be killed by wildlife.

“If you want to die by a boar, come to Katzrin,” he joked.

But he said the periphery is fast developing, thanks in part to government investment, and the unique skills of English-speakers are appreciated in communities where they are rare. For example, his wife is an English teacher at a local high school.

Asked if he saw the fact that the Golan Heights is outside Israel’s internationally recognized borders as a plus or minus, Buki said neither: “It’s all Israel.”

In fact, many of the communities represented at the conference sit beyond Israel’s internationally recognized borders — in the Golan Heights, eastern Jerusalem and the West Bank.

Although Jerusalem is the No. 2 destination for olim and the most populous city in Israel, it is also contested — some parts more than others. Both Israel and the Palestinians claim it as their capital, and it has a large Arab population in eastern Jerusalem.

“We’re based off what the government of Israel decided was a national mission,” a Nefesh B’Nefesh spokesman explained.

For their part, Katie and Joe said they had their hearts set on a home in uncontested territory, a coming-soon neighborhood of the southern city of Kiryat Gat that is seeking to attract English-speaking Orthodox Jews like them. A four-bedroom, 1,200-square-foot apartment in one new building there goes for just over $300,000. Joe would be able to get to his marketing job at a Tel Aviv startup by train in just over half an hour, faster than his current commute from Jerusalem.

Katie enthused that they would live among people with similar backgrounds but within a city that reflects the diversity of Israel. As she was speaking, she was interrupted by a real estate agent looking for young couples to come to Kochav Yaakov, a religious settlement in the West Bank.

“If you’re interested in moving to a good community, you should check us out,” he said. “It’s really diverse. Everyone’s religious, but it’s all different types.”

After politely hearing out the agent’s pitch, Katie confided that she was not convinced.