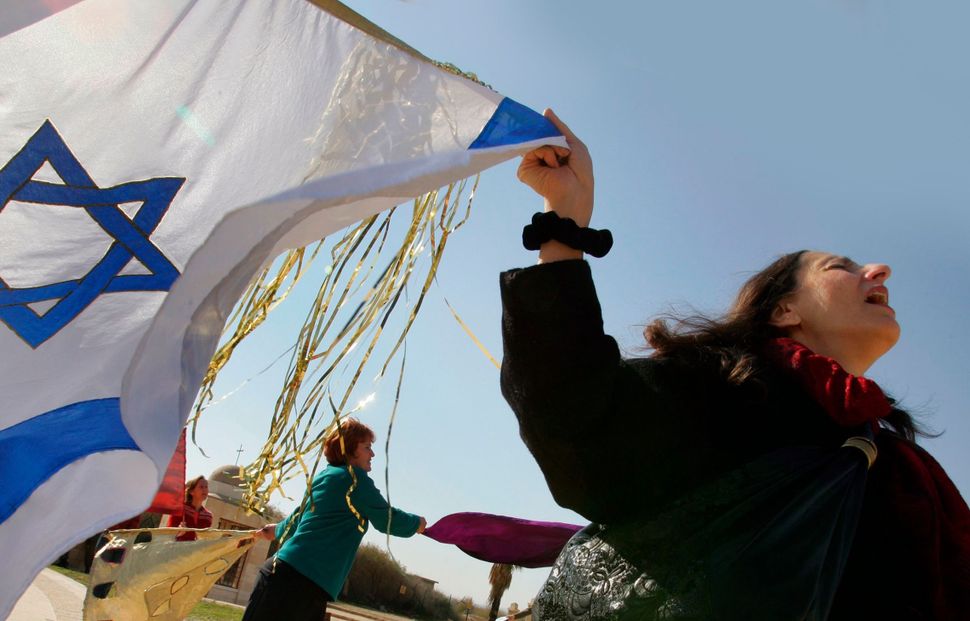 Michele Bachmann, a former Republican congresswoman who drew criticism in 2015 for calling for the mass conversion of the Jews, had an announcement to make to the Jewish people. An Israeli organization seeking to strengthen the bond between evangelical Christians and the State of Israel orchestrated it at the Knesset on the eve of Israel’s 70th anniversary.

“Personally I know that in ignorance, that myself, I have stated things that I should not have said, and I apologize, profoundly apologize, repent and ask forgiveness from almighty God for my statements that, though said in ignorance, have brought pain, and for that I sincerely apologize,” Bachmann said in May. She stopped short, however, of saying she no longer believed Jews needed to convert to Christianity.

Bachmann’s apology was facilitated by Israel365, a company whose focus is nurturing the “natural alliance” between Jews and pro-Israel Christians in the United States. Her audience in the Knesset conference chamber was overwhelmingly evangelical Christian, members of a group visiting the country on a trip organized by Israel365.

The founder and director of Israel365, Rabbi Naphtali Weisz, says his organization seeks to cultivate a positive relationship between Jews and Christians, while reinforcing Christian support for Israel in the United States. Weisz founded Israel365 in 2012 after immigrating to Israel from Columbus, Ohio. Unlike the much larger advocacy groups Christians United for Israel and the International Fellowship of Christians and Jews, Weisz says Israel365 has a biblical focus: Its objective is “educating Christians about Israel” by “highlighting the biblical significance of Israel.” It does that primarily through digital media outreach. Its main avenues are a news site, Facebook page with 98,000 followers, and daily email newsletter featuring biblical verses that has racked up over 300,000 subscribers.

“Jews aren’t, generally speaking, reaching out to Christians and teaching Christians about the Bible, and that’s the void we’re looking to fill,” Weisz said.

Christian Zionist support for Israel stems from a belief that God’s covenant with the Jewish people requires that Christians back “their biblical and historical right to sovereignty in their ancient homeland,” according to CUFI, the largest pro-Israel group in the United States. This has translated into widespread grassroots support for Israel in American politics, and funding for Jewish causes in Israel, including Jewish immigration. A recent report by The Associated Press found that a third of Israeli immigration is funded by the country’s Christian allies.

Some of this support stems from an eschatological belief among some evangelicals in the parousia — the ingathering of the Jews in their homeland that will bring about the end of days, when the Jewish people will be forced to accept Christianity or die. A Pew poll from 2010 found that 54% of American Protestants believe Jesus will return before 2050. A survey published earlier this year by LifeWay Research, a Christian polling group, found that 87% of American Evangelicals believe “sharing the Gospel with Jewish people is important,” and that 47% agree that “Jesus will return when the Jewish people accept Jesus.”

“We have a bad history with Christians, they’ve persecuted us throughout our history. While there are many who still hold onto the belief that the church replaced Israel, the New Testament replaced the Old Testament, there is a movement of Christians who are rejecting that,” Weisz argued. He conceded that many Christians still hold an anti-Semitic viewpoint that Jews will burn in hell for not accepting Jesus.

Indeed, the increasingly close connection between Christian Zionists and Israel has some liberal American Jews and Israelis concerned.

Logan Bayroff, a spokesman for the liberal American advocacy group J Street, said the crux of the issue was what exactly evangelical Christians’ priorities are.

“Do they support Israel’s future as a secure, democratic homeland for the Jewish people?” Bayroff asked. “Or are they committed to a vision that is rooted in other concerns, that is rooted in a religious, messianic agenda where the ingathering of the Jews in Israel is the recipe for some kind of End Time?”

Bayroff argued that evangelical Christian groups like CUFI are “promulgating a discourse about Israel that is ultimately hostile to diplomacy and a two-state solution.” Their encouragement of West Bank settlement expansion and policies regarding Jerusalem’s Temple Mount that could inflame tensions with the Muslim world are ultimately not in the interest of Israel’s long-term security, he said.

Israel365’s entire operation, from the daily newsletter, news website or the Yeshiva of the Nations – which offers Jewish courses on the Bible for Christians – “is connected to the Bible,” said Weisz. Its news site, Breaking Israel News, features articles prefaced by a biblical verse highlighting current events’ significance through the prism of the “prophecy unfolding in the Land of Israel.”

The news site also includes sections on “End of Days” and “Bible Prophecy,” tapping into the prominence of eschatology among modern Christian Conservatives. These sections elucidate Breaking Israel News’ readers on matters such as how “a blue blood supermoon eclipse with the Jewish holiday of Tu B’Shvat” signifies doom for Muslims in Israel’s neighboring countries. The American embassy move was cast in the mold of the Persian king Cyrus’s edict permitting ancient Judeans to rebuild their temple in Jerusalem.

“News from a biblical perspective in the Jewish community sounds ridiculous,” admits Weisz. “But for Christians, it’s so part of their outlook on life.”

While Weisz insists the company and its news organ hold no political position whatsoever, the news site’s coverage refers to Area C of the West Bank, which is governed by the Israeli military according to the 1995 Oslo II Accords, as “Israeli land.” Israel365 doesn’t hide its support for Israeli settlements in the West Bank, a divisive issue in Israel and abroad. Weisz also wouldn’t comment on whether the organization supports a two-state solution, instead insisting that it “doesn’t talk about politics.”

Weisz said much of the Israel-registered corporation’s funding is derived from the sale of goods on its website, including the Israel Bible, jewelry, maps of Biblical Israel and other assorted knickknacks. Israel365 also generates revenue from donations, as well as ads on its news site and daily newsletter.

Israel365’s Knesset-hosted Bible lectures on May 13 placed special emphasis on the historical import of the Trump administration’s decision to move the American embassy to Jerusalem, which was set to take place the following day. Trump’s evangelical supporters were major proponents of the president fulfilling his campaign promise, seeing recognition of Jerusalem as Israel’s capital as a biblical imperative.

The speeches were punctuated with amens, hosannas and hallelujahs from the Christian crowd.

Participants in the study session were armed with copies of Israel365’s “Israel Bible,” which the organization says is supplemented by “contemporary commentary [that] highlights the role of the modern State of Israel in the fulfillment of Biblical prophecy.” Published in honor of Israel’s 70th anniversary, the text highlights verses “that relate to Israel, including relevant quotes and perspectives from prime ministers, as well as abundant maps, charts, and illustrations.”

Yehudah Glick, a Likud party member of Knesset who advocates increased Jewish access to the Temple Mount, headed the study session. He was flanked by Jim Garlow, an evangelical pastor and ardent supporter of President Trump who campaigned against same-sex marriage in his home state of California. The bible study event was the third of its kind organized by Garlow’s wife, Rosemary Schindler-Garlow, whose Schindler Society has pushed for Bible study at the U.S. Congress.

Glick and the other speakers lectured on and emphasized passages from the Bible that discussed the Jewish temple, the centrality of Jerusalem to the Jewish people and God’s role for “all nations.” Glick linked passages from Psalms to the 1967 Mideast war, in which Israel captured east Jerusalem, hinting at divine intervention in the conflict.

“I just want to point out that the people that are here come to Jerusalem, bless Israel not because of interest that they will be blessed, but because they really truly love us,” Glick said.

Yet most of American and Israeli Jewry doesn’t share the conservative social values of the evangelical Christians who support Israel, explained Eli Lederhendler, an American Jewish History professor at Hebrew University. But, he said, “Israel is unfortunately in a position of not wanting to turn away any friend, for understandable reasons.”

At the same time, the Christian right in the United States has aligned itself with like-minded folks in Israeli society who believe that for the country to thrive, it must “restore some semblance of the ancient past,” he said. Many of those people, including Glick, happen to be in power at the moment.

“It is troubling that right-wing governments in Israel have encouraged the kind of friends that we weren’t used to in the past,” said Lederhendler. In the end, it has an impact on the cultural battle for Israel’s identity as a democratic and Jewish state, he said. “There’s a lot of treacherous ground that lies ahead.”

Weisz insists that the only way to engage evangelicals in this “golden age of Jewish-Christian relations” is to engage with them. “By working closely with them, we can help move Christianity to a healthier place in relation to the Jewish community.”