The Feminist Case for ‘Fathers’ and ‘Kings’ 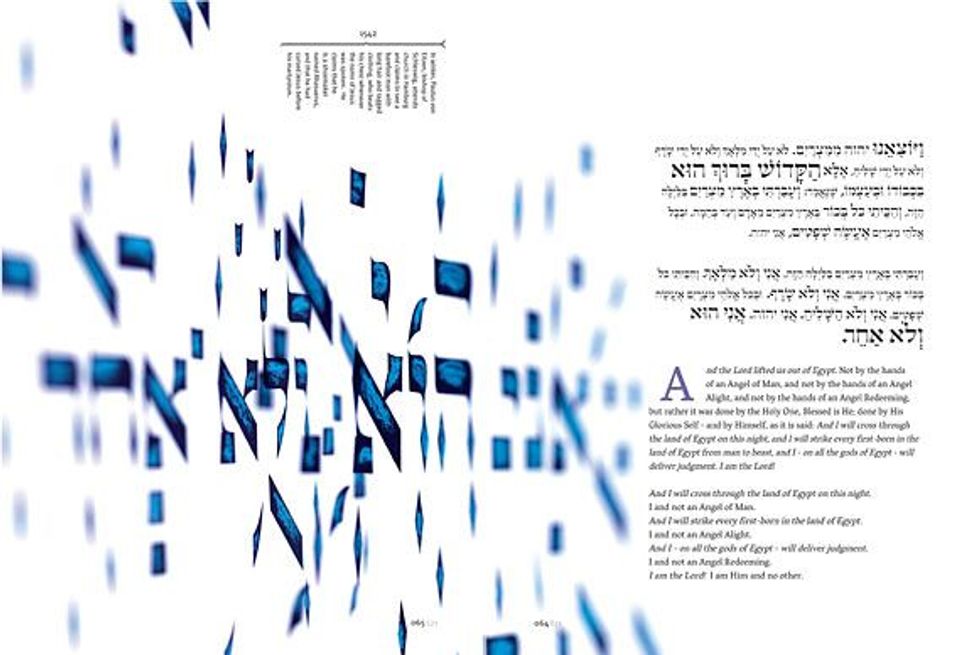 A page from the ?New American Haggadah? Image by Little, Brown & Co.

I was raised in a Reform household. Our congregation had the older version of the Reform siddur, “Gates of Prayer,” the big blue one without the neutered translations. But it was the tradition there to improvise, de-gendering the English readings on the fly, often with charmingly chaotic results. Talk of the He-God makes me uncomfortable, and I sympathize with the discomfort expressed by some here at the Sisterhood with these masculine translations.

In her recent Sisterhood post, Debra Nussbaum Cohen writes about the widespread pairing of Elijah’s cup of wine with a cup of water for Miriam. In some corners of the left-of-Orthodox world, it has become downright traditional. Then she notes: “At the same time, the ‘New American Hagaddah,’ edited and translated by young literary lions Jonathan Safran Foer and Nathan Englander, seems to purposely go in an opposing direction.”

Kathleen Peratis, another Sisterhood contributor, weighing in on the new text, writes, “Some of the contributors of the ‘New American Haggadah’ must have grown up with such ‘gender inclusive’ texts. Yet they neither employed this model, nor explained why they didn’t.” Indeed, their commentary is sparse: There isn’t much that they do explain.

Excising the uncomfortable, often along ideological lines, is a venerable practice in Jewish liturgy. And Englander’s translation is poetic enough that varying God’s gender — or wading into the bizarre circumlocutions that result from an attempt at de-gendering the translated references to God — would have been neither surprising nor stylistically out of step.

It would be easy to assume a sinister intent on the part of Englander and Foer, but because of the onslaught of coverage of “New American,” we know enough about their intent that we need not speculate wildly and indignantly.

Englander and Foer’s approach was to present the Seder text unmitigated. They decided not to translate, say, melech as anything other than the most basic understanding of what it is: They don’t substitute Ruler for King. For good or for ill, they presented the complete, unadulterated Hebrew (and Aramaic) text of the Seder; they didn’t even provide a transliteration.

Once feminist ideology became mainstream in the American Reform movement, it was not long before feminism and that particularly strong propensity for editorializing Jewish prayer came together. It was, after all, the Reform movement that gave us the tradition of adding Sarah, Rebecca, Rachel and Leah alongside Abraham, Isaac and Jacob.

That addition first appeared in a major siddur in a 1994 revision of “Gates of Prayer,” with the subtitle, “A Gender Sensitive Prayerbook.” This siddur was also the first major release to provide a translation that thoroughly neuters all references to God.

Yet my generation (I’m 23) is nearly defined by our rejection of ideologies that require exclusive allegiance. If genderless translation is an example of ideology affecting liturgy, it should come as no surprise that a hip, contemporary liturgy would eschew that in favor of a more straightforward approach to liturgical translation.

When we convince ourselves that we’ve solved the problem of centuries of exclusion of women from Jewish ritual and narrative by reducing God to a cumbersome asexual matter of grammar, we do ourselves a great disservice: We sweep our people’s treatment of women under the rug. When we act like lobbing some non sequitur citrus at the Seder plate — more a symbolic act of complaint than a thoughtful ritual act — solves ages of our tradition’s troubling shortcomings, we miss an opportunity to grapple directly with them.

For my part, both Seders I attended this year were led by women. The first Seder was organized and led by two female friends who identify as queer — and the orange on their Seder plate seemed to me superfluous, as it did at the second Seder, at the home of my female rabbi.

To be sure, neither approach to translation is inherently better than the other. But we few liturgically conscious feminists should not be so quick to pounce upon every minute — and sometimes merely perceived — sign of misogyny in the diversity of modern Jewish practice.

The Feminist Case for ‘Fathers’ and ‘Kings’