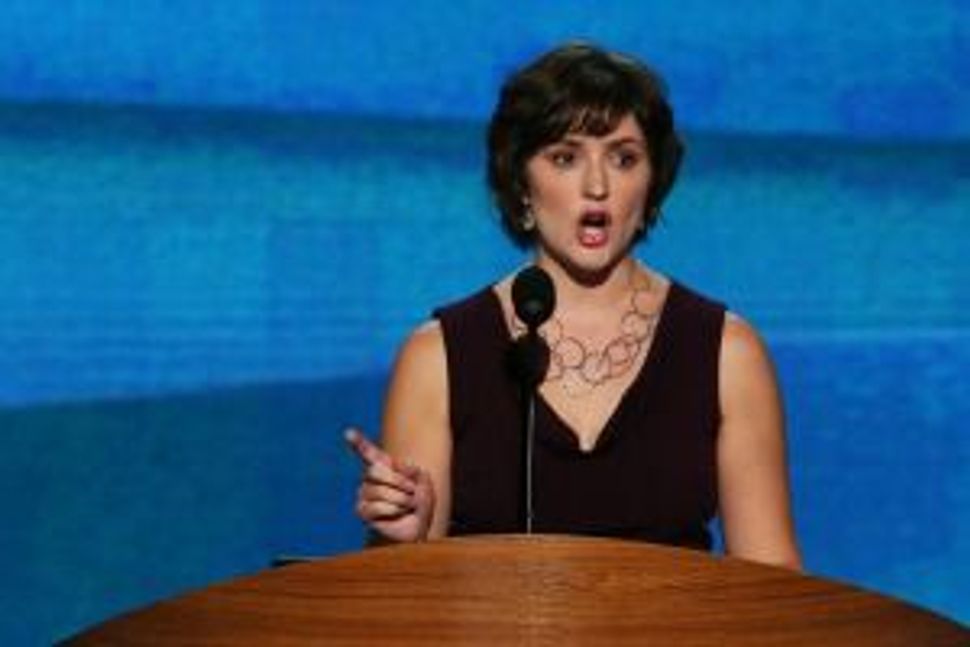 Sandra Fluke at the DNC Image by Getty Images

Sandra Fluke — she of the Limbaugh slut-shaming and the Jewish boyfriend — gave a strong speech about contraception and women’s health at the DNC last night. Bumped up to primetime, the young activist got the crowd excited and did an admirable job hitting the Republican candidates hard over their party’s series of legislative attempts against reproductive rights and health care that are now known as “The War on Women.” She enumerated the worst aspects of that war quite clearly:

It would be an America in which you have a new vice president who co-sponsored a bill that would allow pregnant women to die preventable deaths in our emergency rooms. An America in which states humiliate women by forcing us to endure invasive ultrasounds we don’t want and our doctors say we don’t need. An America in which access to birth control is controlled by people who will never use it; in which politicians redefine rape so survivors are victimized all over again; in which someone decides which domestic violence victims deserve help, and which don’t.

Fluke’s rapid rise to prominence is an interesting story. She was an agitator for birth control coverage at Georgetown chosen to testify at a House hearing on birth control coverage — from which she was eventually excluded. Then she got called a “slut” by Rush Limbaugh, and because so many people recognized that such a sexually-degrading word is commonly used to silence women everywhere, they identified with her plight. She also became an exemplar of how the mere thought of a sexually active young woman gets elements of the ultra right wing absolutely apoplectic. In fact, those elements have remained apoplectic. As Think Progress’s Tara Culp-Ressler documented, the nasty and sexist tweets about Fluke peaked during her speech, as though the lessons from Limbaugh’s caddish behavior — which almost got him fired and vaulted Fluke into heroine status — were the opposite of what they really were. Culp-Ressler notes, “Aside from misrepresenting Fluke’s point that women should not have to pay more than men do for essential preventative health services…these smears degrade Fluke as a woman.”

What may come as a surprise, even as they rally around Sandra Fluke, is that many committed feminists have mixed feelings about her fame, too. Specifically, the beef surrounds the context in which her bravery and risk-taking is elevated to primetime at the DNC while others’ risk-taking is ignored — as well as the original context in which her attacks from Limbaugh revved up a nation while his racism and vulgar attacks on others, including Michelle Obama, have gone on for years.

As Jessica Luther, wrote on a widely-circulating tumblr post, Fluke isn’t the only person who has spoken out for reproductive freedom. On the political stage, women of color and queer elected officials have struck back hard against anti-choice legislation year, and their voices would have been welcome paired with Fluke’s.

There are people who speak out ALL THE TIME but no one listens to them because they are black, trans, immigrant, latina, poor, fat, etc. (unfortunately the list is long). They take big risks to speak up but they do.

As I wrote earlier this year, Sandra Fluke was the “right kind of slut” for mainstream culture, but she’s not the only type of person attacked by the right wing. It’s hard but important to understand that the firestorm around Sandra Fluke isn’t about her specifically — she didn’t ask to be attacked and she handled her newfound platform with grace — but about the way we discuss and view women’s bodies in this country, on both sides of the political spectrum. A relatively privileged young white woman has suddenly become the symbolic and visible center of a battle that on the ground hits poor, immigrant and otherwise excluded women the hardest. Unfortunately for American culture, this is nothing new.