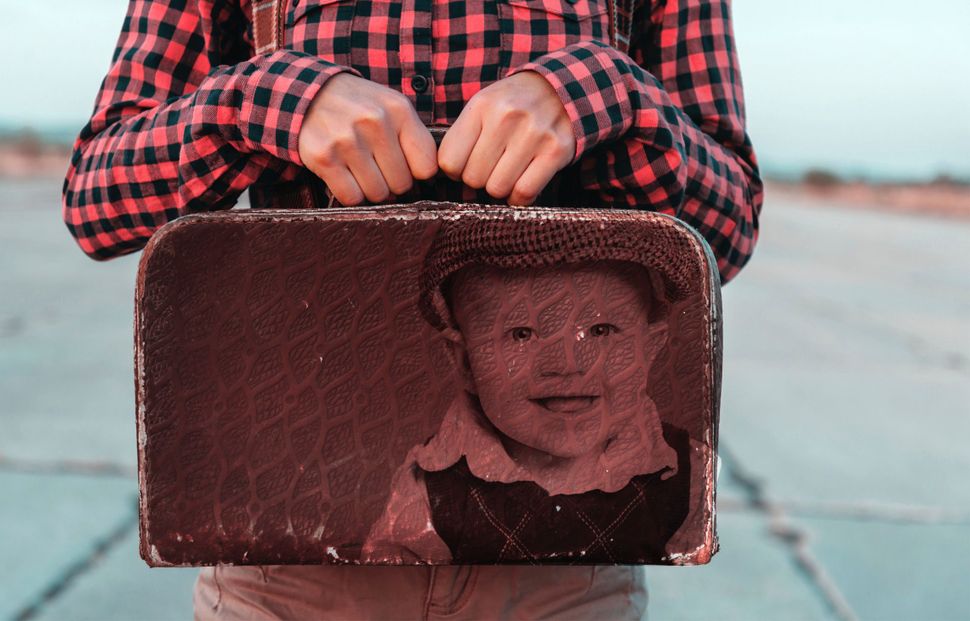 One week after my 85-year-old grandmother died, I learned that she had abandoned her first child and kept her son a secret for decades. A senior in college, I was jarred by the news. I’d spent nearly every day with Grandma Daisy as a kid growing up in Connecticut. While my parents worked, she sang me nursery rhymes in our den and baked me Hungarian crepes. By middle school I had memorized her stories of surviving the Holocaust in Budapest. I knew about the candles she chewed while starving in a convent basement, and the name of the village she reached after fleeing 125 miles through Hungary’s snowy woods.

My mom shared the news about my half-uncle as we sat in our kitchen. “Strange things happen during war,” she said in a gentle voice, reaching over the counter top to cup my hand in hers. But how was it possible that the woman who’d pampered me for 21 years had also deserted her son?

Mom and I stayed in the kitchen for hours. She told me about the displaced persons camp in Bavaria, where Daisy relocated after Russian troops liberated Budapest. My grandma met her first husband there, a Mexican-American soldier named Ralph. When she boarded a ship to live with his Catholic family in southern Texas, she imagined the Land of Liberty as prosperous and secular. But with dirt floors and Virgin Mary paintings hanging above her bed, Daisy’s new home was nothing like she expected. In letters back to Europe, she confessed her misery. Daisy planned to leave the marriage once her mother arrived in the United States. Instead, she got pregnant. Daisy stayed in Texas to give birth to Ralph, named after his father. She was 22 years old. The details of her subsequent departure are hazy. My mom claimed that Grandma tried to take Ralph with her when she ran away, but unable to afford a carton of milk for her son, she returned. When she left again — this time, without Ralph — she cried until her pillow soaked through.

Twenty years later, in 1970, Ralph Jr. discovered letters that led him to Daisy in California. They hadn’t spoken since Ralph was a toddler; he grew up under the impression that his mom had died. He found Daisy living in Woodland Hills with her new husband, my grandfather Ron, raising her two other children, my mom and uncle. His arrival shocked everyone. Ralph hadn’t realized that my grandma had kept him a secret. As Daisy’s life tail-spun into a second divorce and a gambling addiction, she kept Ralph on the fringes. More decades passed, but still she rarely spoke about him with my mom and hid his presence from me.

As I finished my final semester of college, I struggled to reconcile my version of Grandma Daisy with the person these stories depicted. I confided my feelings to my new boyfriend, Nathan, as we walked along the river by campus. He wondered why the new information about Daisy had such a profound impact on me. I didn’t understand my reaction either, or why I felt so mired in the maze of my grandmother’s past. As I fixated on images of Ralph, always a little black-haired boy looking for his mom, I speculated that my grandma’s pain had skipped a generation. Maybe I was experiencing the emotions she tried for so long to bury.

I graduated and moved to Berlin with Nathan, convinced that living in Europe would help me absorb crucial insight I couldn’t find at home. Walking by bullet-scarred buildings and over Hitler’s bunkers on my way to work, I stumbled through German history and wanted to identify as its descendant. I remembered back to when I visited Budapest the summer before my grandma’s death, exploring the labyrinthine basement where she hid in 1944. At the time, she called me her “little twin” and proclaimed I had walked in her shoes. But I hadn’t. The emotional intimacy I had cherished seemed to disappear behind the parts of her life I knew nothing about. Holocaust-related trauma hadn’t only robbed my grandma of the happy life she could have led; it also took away the relationship I thought we shared.

When my family called to tell me they had found Ralph’s email address on Google, I refrained from contact. I feared that a correspondence with Ralph would unearth more unpleasant facts, or that he would reject a relationship with me. Eight months into my Berlin tenure, my desire to connect overpowered my hesitation.

“I don’t understand my grandma’s choices, nor do I agree with them,” I typed to my half-uncle, unsure he would ever respond those words.

The next morning Ralph’s name flashed across my inbox. He admitted that my message was unexpected, but welcome. “You remind me of myself in 1970,” he quipped, citing his desire all those years ago to find my grandma. He was 60, a grandfather himself now with a business in Texas doing house repairs.

Ralph sounded happy. His serenity was palpable, and as I compared our two emails, I felt embarrassed by the jagged emotions in mine. It occurred to me that the sadness I projected onto my grandma’s story might not extend beyond me, not even to Ralph. I questioned why I had co-opted the negative emotions of Ralph’s abandonment, while he had made peace with his past. Perhaps I too felt deserted, but my half-uncle’s words made it clear that I had inserted myself into a role of suffering.

With an ocean between me and my family, a language barrier between me and my adopted city, and a young relationship weathering the unfamiliar, I had rebuilt the very barriers my grandma encountered during her first years in America. This must have been my attempt to recreate the intimacy with my grandma I felt I had lost. But I had constructed these obstacles by choice. My grandma faced them from necessity. In the absence of truly being able to empathize, the best I could do was accept my grandma’s decisions and make peace, like Ralph.

Shortly after Ralph and I exchanged emails, I moved to a new apartment in Berlin near an abandoned airport once used by Nazis. It had turned into a public park, where Nathan and I could ride our bikes down the runways. I always planned to cycle across the field so that I could peek into the terminal’s windows, straining to picture the warplanes that once revved their engines. I never did. The quiet flatlands on our side of the park turned out to be too appealing.

Stephanie Newman is a writer and consultant based in New York. Her work has appeared in The Millions, Electric Literature, and The Quarterly Conversation, among other places. Follow her on Twitter at @SNewman2291