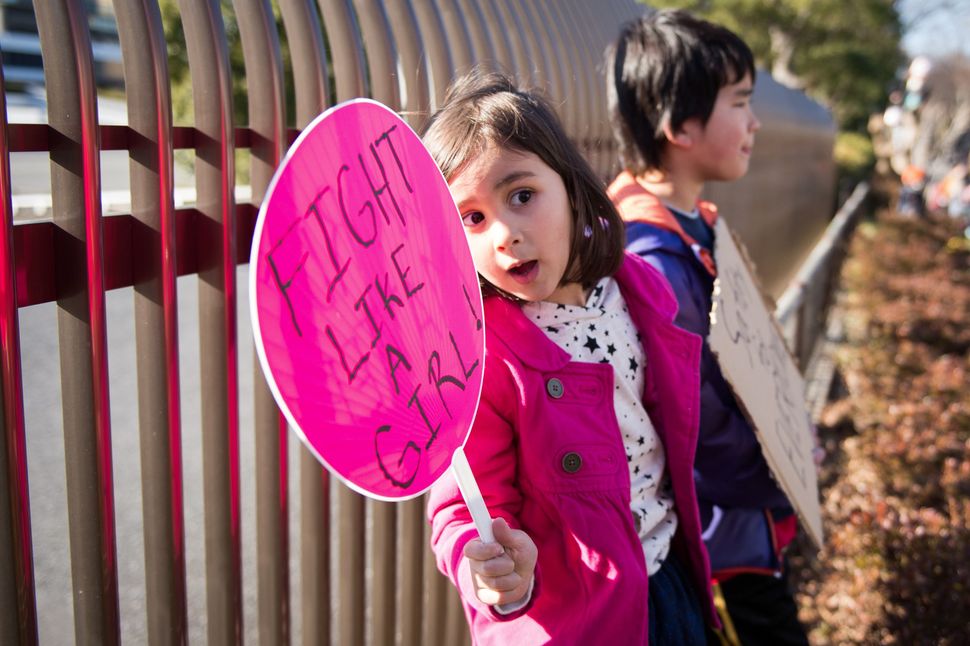 One year after the election of Donald Trump, the Orthodox Jewish community remains conflicted.

Yes, many Orthodox Jews voted for Trump. Yes, many Orthodox leaders hesitated before coming out with a critical statement of the president after the events in Charlottesville, Virginia. And no matter what #45 may do, there is this sense that his religious Jewish supporters will forever refuse to admit they were wrong.

At the same time, there’s also been an interesting, grassroots resistance emerging in the community, between Orthodox ‘NeverTrump’ Facebook groups going public, more and more visibly Orthodox Jews showing up at rallies for racial justice and some groups raising tens of thousands of dollars on behalf of causes like Puerto Rico relief efforts, who noticed that there was no drop-off location in Brooklyn’s Boro Park and immediately took to social media in English and Yiddish to raise funds and supplies. 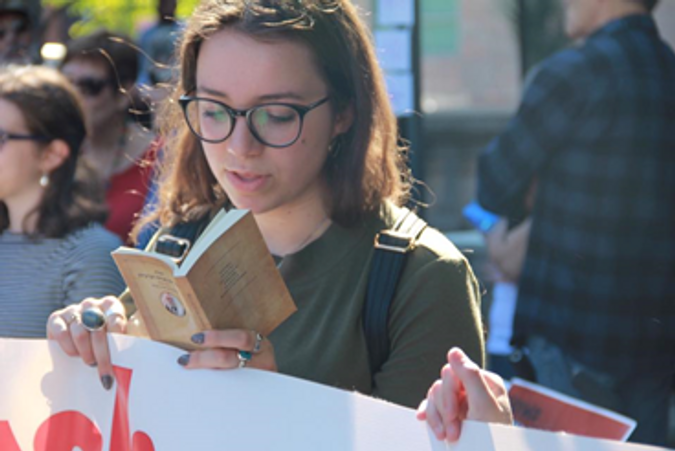 An attendee at the March for Racial Justice NYC. Image by Blima Marcus

For a ‘woke’ Orthodox Jewish mother like me, living in Brooklyn, a central part of my liberal activism is figuring out how to raise my children with the values I believe stem from Torah Judaism and for which I vocally advocate.

It’s not easy. While I can talk to my children about large issues such as equality, activism, inner strength, resisting tyranny, fighting injustice, I know I’m up against a lot of social pressure, with most of their classmates coming from passionately pro-Trump families. And I don’t always have the answers to some of their toughest questions: Why does my uncle like President Trump? Why do our politicians want to deport immigrants and refuse assistance to war refugees? Teaching children to resist unjust authority while respecting teachers and elders is a delicate balance.

But at least I know I’m not alone in what feels like an uphill battle.

During election season, one 35-year-old Orthodox mother who resides in the Flatbush section of Brooklyn told me how her then-6-year-old soberly voted for Hillary Clinton during their first-grade mock election. “She told me she was the only one who voted for Clinton, and all of her classmates voted for Trump. She was shy about being the only one, but insisted on her candidate.”

Sara Atkins, a political activist living in Philadelphia with her husband and five children, took some of her children to a 24-hour healthcare vigil. 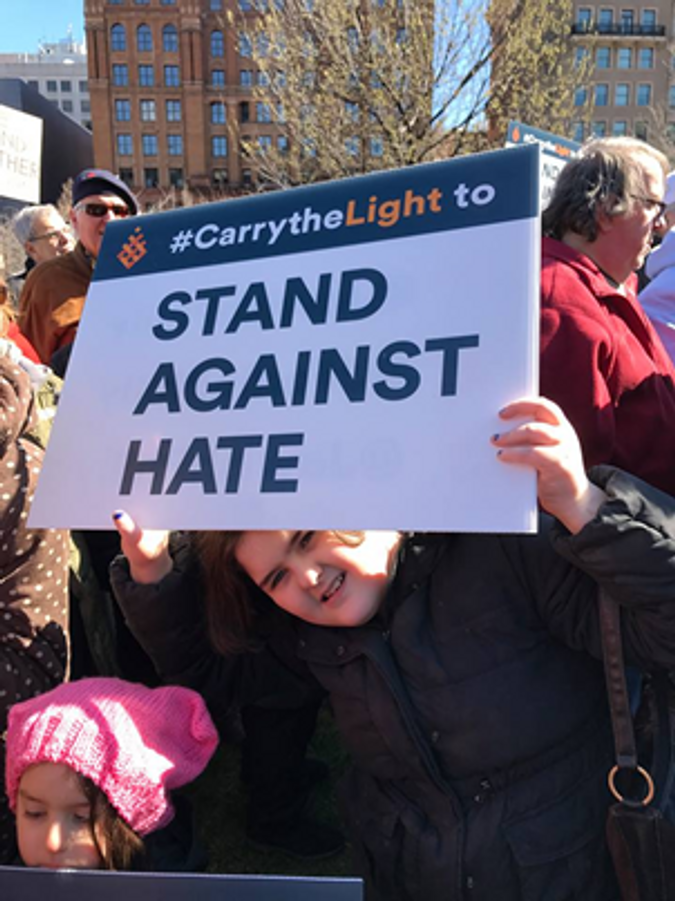 Mimi and Freida Atkins at the Stand Against Hate rally in Philadelphia, in March 2017. Image by Blima Marcus

Atkins homeschools her children, and one of her daughters is now doing a school project on voting rights. “My kids know all about my civil disobedience and ask me about it whenever they feel like it,” she said. “I am very open with them.” Atkins took part in the protest against the hearing of the Graham-Cassidy bill in Washington, D.C.; the chaos of the protesters made it difficult for the open hearing to continue, and with Sen. Susan Collins’s vote, the bill died.

And the political activism doesn’t go unnoticed by conservative neighbors and schoolmates.

“My kids got bullied back during the first Obama run, and were called Obamanations,” she said. “My kids do not understand the racism and hate on the other side. They can’t understand how that intersects with Torah and derech eretz.”

Mrs. L. of Monsey, New York, said that her two sons were harassed after sharing their liberal political beliefs with their classmates. “In 2008, when my son was in fourth grade or so, he revealed that his mother was an Obama supporter,” she said. “Is she crazy?” the children wanted to know.

“The teacher was no help; he actually said some racist things.”

Mrs. L.’s other son recently changed yeshivas, hoping to blend in better. He confided in his mother that he didn’t mind being a “liberal” at his previous school, but doesn’t want to risk that in his new environment.

One 50-year-old Modern Orthodox woman who lives with her husband and children on the Manhattan’s Upper West Side said that she took her children to the Shabbat-friendly portion of the Women’s March last January. “It was a powerful experience for them,” she said – and an unusual one, for children from her community. 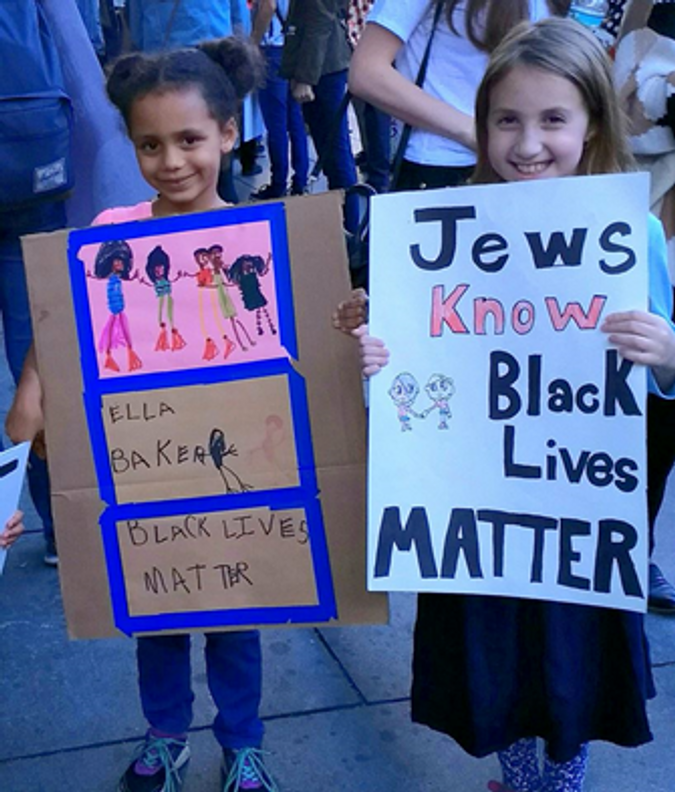 “We have always tried to raise our kids with positive middot (traits): tzedakah (charity), hakarat ha’tov(appreciation), hachnasat orchim (hospitality), etc,” Noah Liben of Teaneck, NJ told me. “We make gemilut chasadim (acts of kindness) a regular part of our daily lives. For us, these principles took on extra significance during Trump’s campaign and following his election. We wanted to emphasize to our kids the value of speaking and acting respectfully even towards people with whom we strongly disagree; that being “other” or different does not signify being lesser; that humility is more important than pompousness — all lessons that a child would easily miss were she to look to Donald Trump as an example. Last February we brought our eight-year old daughter to a rally in Teaneck, NJ denouncing the president’s immigration ban. We think she’s getting the message.”

Another Orthodox mother, Cherie Zucker, was shocked when her 5-year old came home after the election upset because “Donald Trump doesn’t like girls.” 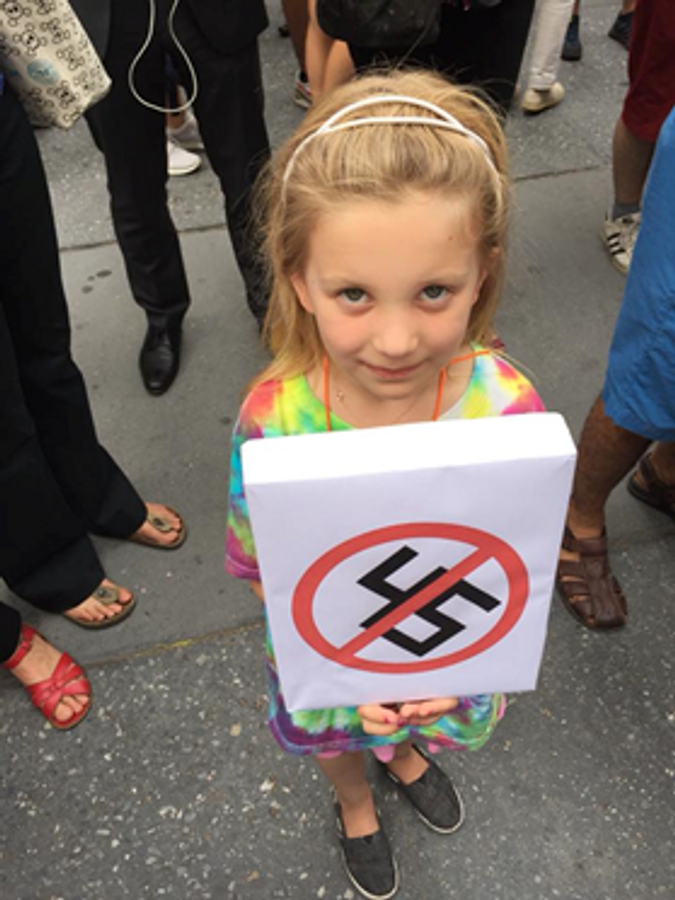 Cherie Zucker’s 5-year old at an anti-Trump protest on 5th Avenue after the violence in Charlottesville, Virginia. Image by Blima Marcus

“Now at six years old, she has joined me to protest,” said Zucker. “After Charlottesville, we stood on 5th Avenue with our fellow New Yorkers chanting ’Nazis are bad!’ My daughter asked me afterwards, who are Nazis? I explained to her that Nazis hate anyone they think is different, to which my blond-haired blue-eyed baby responded “Mommy, I’m not different.” She paused. “The conversation broke my heart.”

Chelly Massey-de Bock, currently living in Atlanta, Georgia, shared her experience of having her son’s friends over on Shabbos. “I’m still trying my hardest to inject some liberal values into all the young adult men I’m hosting on an almost daily basis-and certainly for Shabbat! The healthcare debate got some of them out of the Trump camp. They know and see that I’m disabled, and I told them that Trump and the GOP wanted to take healthcare away from people like me. Some of them were horrified.” Still, she says it’s hard living in a red state, which she laughingly refers to as “Trumpistan.”

Rachel Goldberg shared a photo of her children at a rally after Trump’s initial immigrant ban. “My 4-year-old son dictated the words, and my daughter wrote them for him. We are in the Boston area, in a town that’s a sanctuary city and with a very outspoken, anti-Trump mayor, and our Jewish community feels much as we do. My kids are horrified that some of their relatives are on the other side of this argument.” 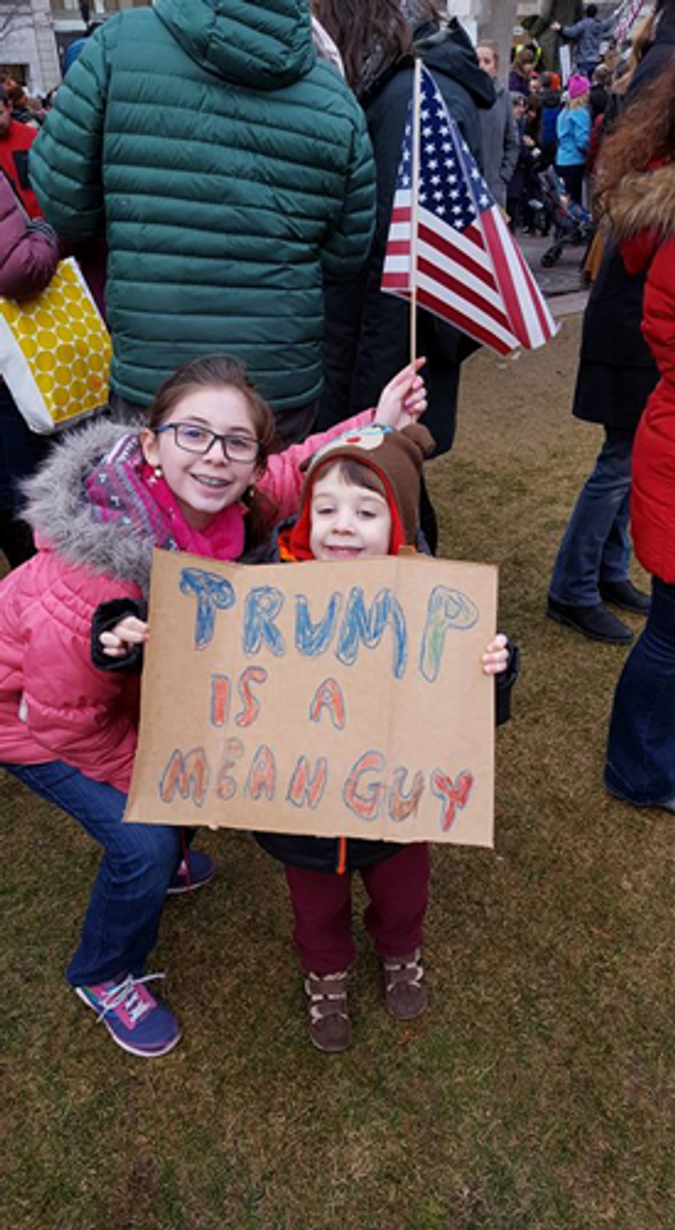 Rachel Goldbergs children at a rally in Boston after the initial immigration ban. Image by Blima Marcus

The Hasidim who operate a secret text-messaging based Resistance group described similar experiences.

One Hasid said he made sure to take his children to Martin Luther King, Jr’s statue on a recent trip to Washington D.C. “I know my kids get no education about the civil rights movement in cheder,” he said ruefully. “I usually bring them books from the library about MLK & the civil rights movement.” He said he also prints out quotes from MLK & Fredrick Douglas and hangs it up around the house around MLK day.

Another man said he’s still working on the basics: Lecturing his children if they use any derogatory terms for other people, including non-Jews or Jews of different denominations, and reminding his children that even when others look different than us, they are worthy of kindness and respect. Another Hasid interjected and said, “We all do that!”

Several men agreed that many Hasidim and other ultra-Orthodox people have an “us versus them” mentality, and it’s hard to battle it. One man said his son reported to him that his principal repeatedly criticized Obama’s presidency as illegitimate.

Another Hasid told of how his son asked him “if it’s okay that he doesn’t acknowledge that he supported Hillary.” His son was embarrassed about it in school, but it also bothered him that he was ashamed of it. “We never really reached any full resolution,” the Hasidic father said. “But it’s an ongoing conversation about how people around us can be wrong even if they seem to be in the majority. We’ve been using these as opportunities to work on critical thinking skills, discussing the way rumors spread and evolve, how to use sources etc.”

One rabbi in the Hasidic Resistance group said that during a family discussion of the weekly Torah reading last week, he mentioned Genesis 6:2: “The sons of God saw that the daughters of humans were beautiful, and they married any of them they chose.” The Rabbi mentioned an interpretation by Nachmanides where the “sons of God” means “men of power.” He then explained to his children that “the people in power who are supposed to enforce the rules are the first to break them.” The conversation led to unpacking how “people like Harvey Weinstein and Donald Trump can get away for so long with the most horrible crimes, because they are rich and powerful and why that is so terrible to a healthy society.”

Sometimes it feels like a losing battle to try to be on the right side of history when the tides are against us – particularly in our insular communities, where the socially accepted party line is that of the conservative supporters of Trump.

But when my 6-year-old daughter was asked to bring into her yeshiva day school a favorite book to share with the class, she chose “We Came to America,” by Faith Ringgold: a children’s book which looks back on the beauty and diversity of America’s immigrants.

Blima Marcus is a doctoral nursing student at Hunter College, an oncology RN at NYU Perlmutter Cancer Center, and published author at American Journal of Nursing. She lives with her husband and children in Brooklyn, New York.