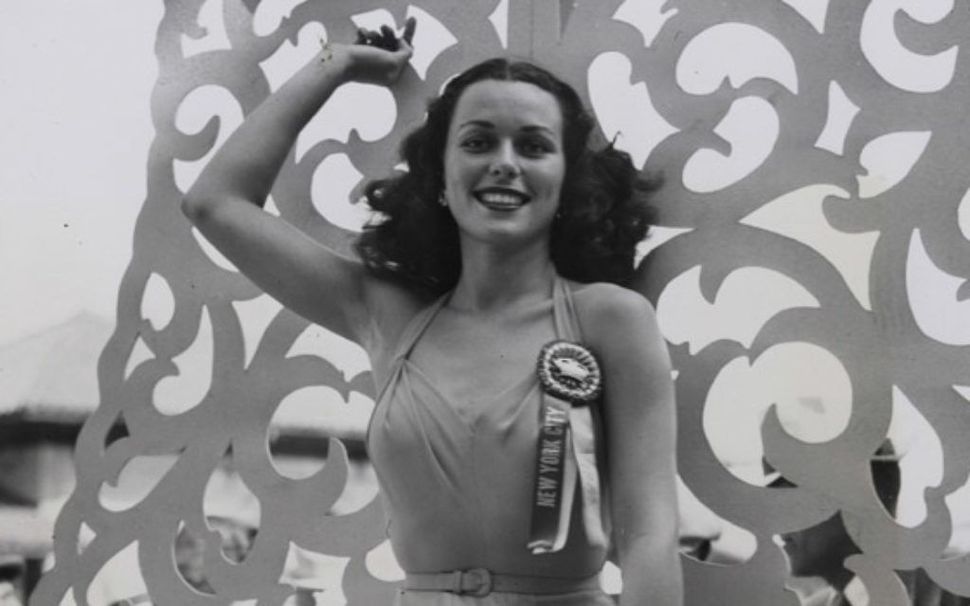 Bess Myerson, the only Jewish Miss America Image by Museum of Jewish Heritage

The Miss America contest will no longer continue the bathing suit and evening gown portion of the pageant according to Gretchen Carlson, the new organization’s chairwoman. After all, the idea of men judging a woman’s merits based on how she can fill out a bikini is an anachronism in the era of #MeToo and gender equality. It had me wondering how Bess Myerson, America’s first Jewish Miss America and an early heroine of my mother, would have felt.

Bess Myerson, a native of the Bronx, came from a family of Russian Jewish immigrants. Her parents emphasized the importance of scholarship, not beauty. Myerson’s path to the crown of Miss America almost didn’t happen. She was entered into the Miss New York contest without her knowledge, by an amateur photographer who had employed her as a model while she was attending Hunter College. When her sister, Sylvia, told Bess, was livid. She felt the whole “beauty business” was utterly embarrassing. In a borrowed bathing suit, Bess Myerson went on to win the title of Miss New York City and later Miss America.

The reason I know this is because my parents met a young Bess Myerson once. Long before her years as a professional model, television actress or the New York Commissioner of the Department of Cultural Affairs. It was back in 1945, on September 6, just two days before Bess Myerson won the crown.

Dad and Mom had traveled from Newark, New Jersey in a pea-green 1942 Pontiac Metropolitan, to spend a few days at the Ambassador Hotel. They were to be guests of Paul “Skinny” D’ Amato, the mob-connected owner of the legendary 500 Club.

The trip might have been happier except for the news that had arrived at the house a week before. My father had received the tragic confirmation that most of his relatives had perished in camps named Bergen Belsen, Buchenwald and Auschwitz. Only one single cousin had survived, the rest now reduced to ash. Hearing the news, my father called Mr. D’Amato to ask if he could arrange a getaway for himself and my mother.

A trip was arranged and soon my parents were on the road. I cannot imagine what the drive must have been like. While my Dad was alive, he never once spoke to me or my brother about what had happened to his family.

After checking in to the Ambassador, my parents strolled the weathered planks of the boardwalk and enjoyed the early autumn weather trying to distract themselves. It was cool that evening and my mother wore a fox trimmed coat, my Dad a black fedora and overcoat.

On the way back to their hotel, my mother spotted a lone woman standing near the boardwalk rail and walked over towards her.

“Excuse me,” my mother said. “You look like Bess Myerson.”

The young women seemed to open up rather quickly—perhaps she was lonely, after all those hours on stage, the endless makeup and hair and high heels.

My father watched as my mother—her foot three inch frame and dark Semitic features—chatted with this tall willowy beauty. Eventually Bess reached over and hugged my mother; my mother wished her good luck in the competition.

“What did she have to say?” My father asked.

“That one,” my mother said, “is a fighter. The pageant wanted Bess to change her name to sound less Jewish, but she refused.”

“The only reason Bess agreed to take part in the swim suit competition is that she is hoping to win a scholarship for graduate school, but she hates the idea of having to get almost stark naked for a group of strangers.” My mother was clearly worked up. Or so goes the family lore.

“That one,” My father said, pointing towards Bess, “will do just fine.”

What would Bess say, today? As the Miss America competition finally canceled its swimsuit competition? I can’t help but wonder if she would feel relieved, in the hope that perhaps one day, women finally be defined by who they are, and not by how they look.