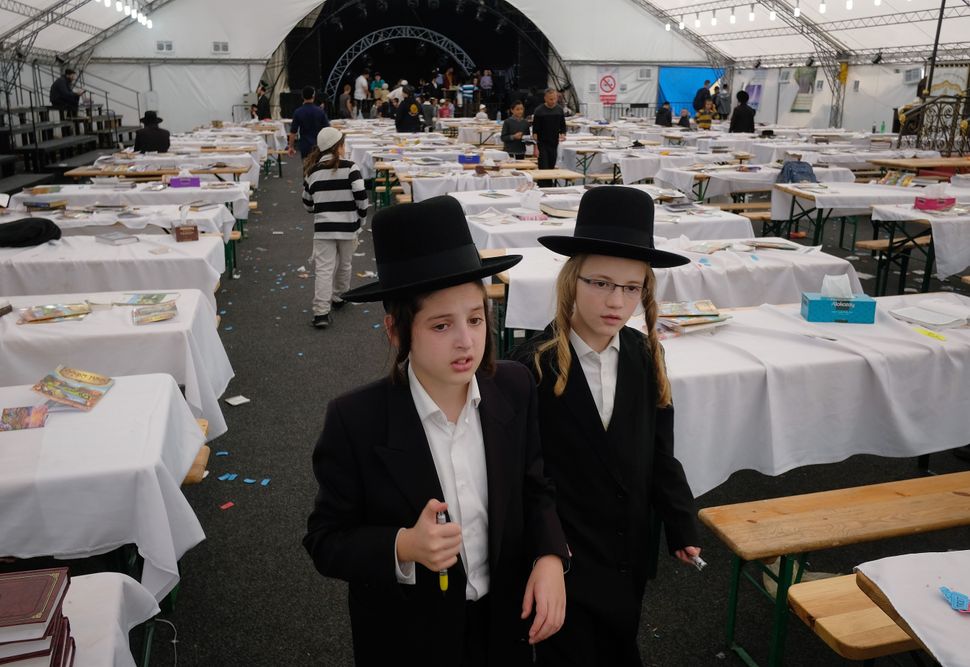 People close to me know that I’ve always felt a kinship with the Hasidic community.

Part of the appeal for me is their success at maintaining Yiddish as the lingua franca of their community. Where else but in Williamsburg or Mea Shearim do you hear Yiddish wherever you go: on the street, at home and in shul? Where else might you suddenly feel like you’ve dropped into a Sholem Aleichem story, strolling among the various characters of his fictional town, Kasrilevke?

But it’s more than that. I’ve always admired how ultra-Orthodox communities take care of their own, just as Jews did in the thousands of shtetlekh throughout eastern Europe. A bride from a low-income family gets a free wedding gownn. Families who have fallen on hard times can find clothing in good condition at the “gemakh” (short for “gemiles khesed”, acts of kindness) – a repository of useful items that people can borrow and then return. Soup kitchens provide meals for the poor in dignified restaurant settings. The destitute can attend any wedding and be given a meal. If a woman has just given birth or if is ill, one or two teenage girls will come by each day to help out with shopping, cooking, laundry or minding the children. The list goes on and on…

So when I first began speaking to young OTD’s (acronym for “off the derekh”, or someone who leaves the Orthodox community) about 15 years ago and they complained about the inferior education they had received – especially among the men – I assumed that these were isolated instances. Heartbreaking, but not reflective of the entire Hasidic school system.

But when activist Naftuli Moster launched YAFFED (Young Advocates for Fair Education), an advocacy organization aiming to ensure that all Hasidic students receive a full education as required by law, I realized that this was not just a case of several poor teachers or schools but of the entire school network. Moster has indeed succeeded in convincing most people outside the Hasidic community of the importance of his cause, but it’s doubtful whether he could convince the Hasidim themselves. Although he grew up in an ultra-Orthodox family and attended a Belz yeshiva, he has since left the community.

But now a book has appeared that could actually change Hasidic public opinion. An anonymous Hasidic blogger, who publishes under the pseudonym Katle Kanye (literally “reed cutter” but idiomatically “blockhead”), has written an insightful critique of the education provided by Hasidic schools, particularly the boys’ schools.

The book is written in Yiddish, hence clearly directed towards the parents and grandparents of these students, and is available on Amazon. As one who sent his own children to Hasidic schools and whose grandchildren attend it presently, Katle Kanye’s observations could resonate much more than articles written by non-Hasidim for The New Yorker and other secular periodicals. The fact that a well-known Hasidic periodical, Der Veker, has published the book, gives it even more credibility.

In the book, Vetinok Lelamdo Sefer [Educating Children], Katle Kanye tells it like it is, basing it not only on his own observations, but also on informal interviews he had with his relatives, friends, neighbors and even boys attending today. Some of his observations are shocking.

I learned, for example, that the schools not only fared poorly in teaching secular studies – boys don’t learn about the seasons, the secular months of the year or the parts of the body (and forget about multiplication). Kanye describes how many Hasidic school teachers are shockingly incompetent at teaching Hebrew subjects like Bible, Talmud and Jewish law, content that should have been the jewels in the crown of a Hasidic school system. Despite the fact that the boys spend most of the day in front of an open Talmud, and do so year after year, most of them, upon reaching adulthood, can barely manage to give a short Torah lesson, in part, because they were never taught critical thinking skills or how to write an essay.

Katle Kanye provides a vivid example of this: Although it’s customary to celebrate an Orthodox couple’s engagement with a betrothal party called a “vort” (vort is Yiddish for “word”, referring to the words of Torah that the groom shares with his guests), Katle Kanye points out that most so-called graduates of the Hasidic schools can’t prepare even a short Torah lecture without the help of an Artscroll, the English-language series of books and commentaries from an Orthodox Jewish perspective, popular among observant Jews who were not raised with a yeshiva education.

The author continuously refers to the inferior education in these schools as a “khurbn” – a catastrophe – “for our youth”, reiterating what a terrible waste of talent it is to let children go through 12 years of schooling without learning much of anything, and how this affects not only their career prospects, but their spiritual and intellectual growth as well.

Due to the lack of education in subjects like economics, art, music, science or even the basics of how the American democracy functions, Katle Kanye explains, many young Hasidim are unable to discuss world events intelligently. They’ve simply never been taught how to think critically, or how to consider an issue from various perspectives. As a result, when they socialize with friends or family, he writes, “all you hear is mindless chatter about the latest cars, gadgets, vacations and restaurants, who makes more money, gossip from the grapevine and inner Hasidic politics”.

And yet, although Katle Kanye’s espousing of subjects like music and science are radical by Hasidic standards, he insists throughout the book that the schools must continue to be respectful of Chasidic beliefs and values. The challenge, he says, is incorporating these two viewpoints into one enriching whole.

Katle Kanye has written what many Hasidim know full well but are afraid to admit. No doubt, this book is being discreetly passed around and read. No doubt, many of them are nodding knowingly and discussing the issue he raises, albeit behind closed doors. The hope is that some of them will find the courage to demand that school administrators improve the education of their children, and if that doesn’t work, perhaps convince well-to-do supporters – both inside and outside the community – to help build a new school that successfully integrates Hasidic values with a thorough secular education.