Israel Builds Another Barrier, This One To Bar Illegal African Immigrants 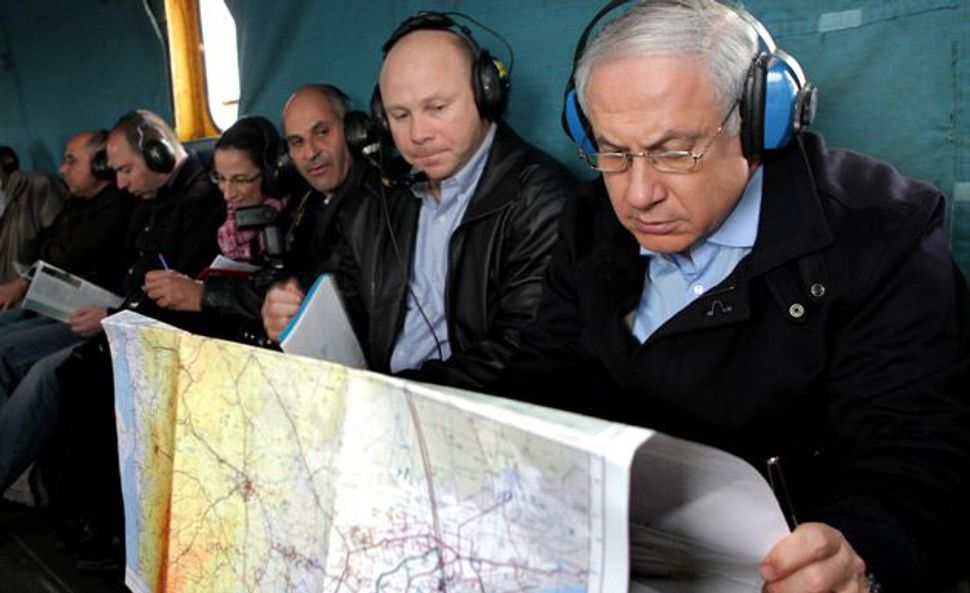 Mapping It: Israeli Prime Minister Benjamin Netanyahu studies a map while aboard a military helicopter heading toward Israel?s southern border with Egypt on January 21. Netanyahu has ordered construction of the barrier along Israel?s 155-mile desert frontier. Image by GETTY IMAGES

Seven years after starting work on the controversial West Bank security barrier, Israel has decided to build another barrier — along its border with Egypt.

In March, the Cabinet approved a plan to seal Israel’s southwest border, which is currently secured only by patrols and monitoring devices. Egypt has not raised any objection.

Prime Minister Benjamin Netanyahu has presented the decision as necessary to protect Israel’s Jewish majority. In statements released by his office, he argued that the problem with Israel’s southwest border is that, since it is one of the few places where people journeying on foot from Africa can enter a Western country, many Africans go there to sneak into Israel.

Since 2005, there has been an influx of Africans to Israel, the vast majority of them Sudanese and Eritreans. Upward of 15,000 Sudanese and Eritreans have reached Israel via Egypt, according to politicians who decry the situation and to activists who defend the entrants. Police estimate that there are currently 100 to 200 illegal immigrants a week. Many leave Egypt out of a fear of deportation by the authorities — a practice highlighted by Human Rights Watch.

“There is broad agreement that we need to protect the State of Israel and its future as a Jewish and democratic state,” Netanyahu said when announcing the Cabinet decision. “We cannot allow the current situation to continue. The quantity of infiltrators will only increase, also given the economic attractiveness of the State of Israel.”

Work on the project, estimated to cost $362 million, will begin later this year and last until 2013. Initially, two stretches of fence will be built — one near Gaza and another near Eilat — and Israel hopes to seal the rest of the 160-mile border by installing advanced monitoring and deterrent devices.

Netanyahu has strong support for the plan on the political right. Yaakov Katz, a lawmaker with the right-wing National Union party, told the Forward that he considers sealing the southwest border “a million times more important” than the conflict with the Palestinians, given the project’s long-term ramifications for the state. “In the last 100 years, the Jewish people has built here a Jewish state. Within 10 years infiltrators could cause this to go down the drain,” Katz, chair of the Knesset’s Committee on Foreign Workers, said in a statement.

He estimated that within six to seven years, there will be 100,000 illegal immigrants in Tel Aviv, and he titled his statement, “Residents of Tel Aviv — Wake Up!” He wrote: “Is this what we wanted when we built Tel Aviv? That it should be an African City?”

Katz claimed that Israel will experience a rush of illegal infiltrators ahead of the sealing of the border, and called for the establishment of a city especially for them, where they would be assigned construction work. Their tasks would be a “burden” and cause them to advise relatives not to come to Israel.

Katz’s plan was strongly criticized by the political left, by civil rights groups and by advocates for illegal immigrants. Sigal Rozen, public activities coordinator for the Hotline for Migrant Workers, an advocacy and support organization, described it as “inhumane, illegal, and an idea that would not achieve its goal, as people running for their lives will continue running for their lives.”

Some believe that Netanyahu has another strategic reason to build this fence. Efraim Inbar, director of the Begin-Sadat Center for Strategic Studies at Bar-Ilan University, said he believes that the primary objective is to prevent the smuggling of arms destined for the West Bank into Israel. But by presenting illegal immigration as the main concern, Inbar said, Netanyahu avoids friction with Egypt. Although Israel has security arrangements with Egypt to prevent arms from reaching Israel, Inbar said that “since the Egyptians are not doing their job as expected, we have to do it ourselves.”

Whatever the main impetus for sealing the border, the effect on would-be illegal immigrants is clear, and some activists and academics are objecting. Rozen said that the plan is “extremely worrying,” she elaborated, “If they seal the border hermeneutically, Israel will be violating its international responsibilities.”

Rozen argued that Israel is entitled to construct a border fence on its territory, but she claims that it should do so only if it has a procedure in place through which Sudanese and Eritrean entrants can apply to enter and live in Israel legally. There is no such procedure open to them. One group, the Sudanese, is suffering because its native country is Israel’s enemy and Israel refuses to give residency to people from enemy states. And Israel refuses to offend Eritrea, with which it has trade ties, by deeming its citizens in need of a haven from persecution, meaning that their status is also not up for consideration. Rozen claimed that this violates the requirement of the United Nations Convention Relating to the Status of Refugees for all asylum seekers to undergo “refugee status determination” procedures. If the border were sealed without the government addressing this situation, Israel would violate a 2006 conclusion of the UNHCR Executive Committee that is meant to prevent asylum seekers from being sent back to their countries if they could face persecution there, she claimed.

The prime minister’s office, asked by the Forward to respond to Rozen’s claims, declined to comment.

Hebrew University political scientist Gabriel Sheffer, co-editor of the 2009 “Existential Threats and Civil-Security Relations,” said that any sealing of the border should involve the construction of “gates” where people who are found to have a case for asylum could be granted entry.

Inbar considers Rozen and Sheffer’s criticism “absurd,” saying that the notion of sealing the border only to then allow people to enter is counter-intuitive. “We have enough problems here — we don’t have to deal with the political asylum of other countries,” he said, claiming, “There are enough countries that give political asylum, and they are larger than us.”

Israel Builds Another Barrier, This One To Bar Illegal African Immigrants