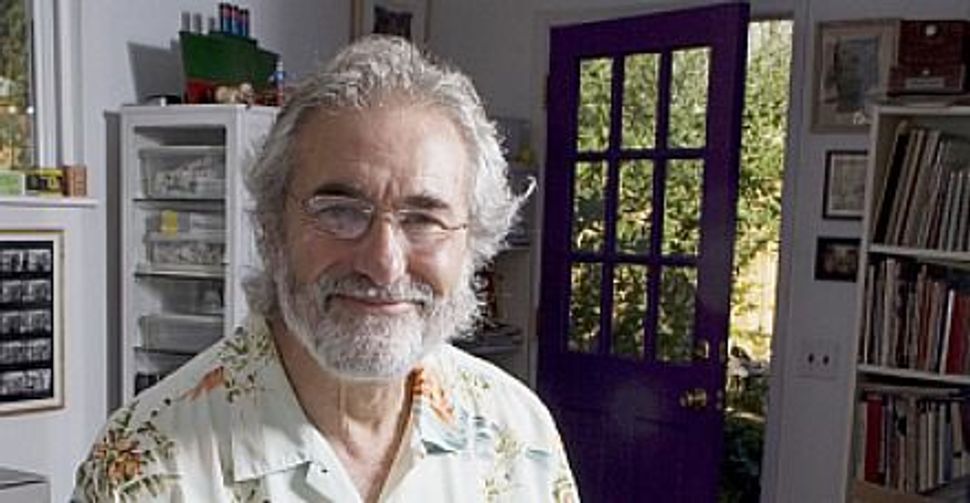 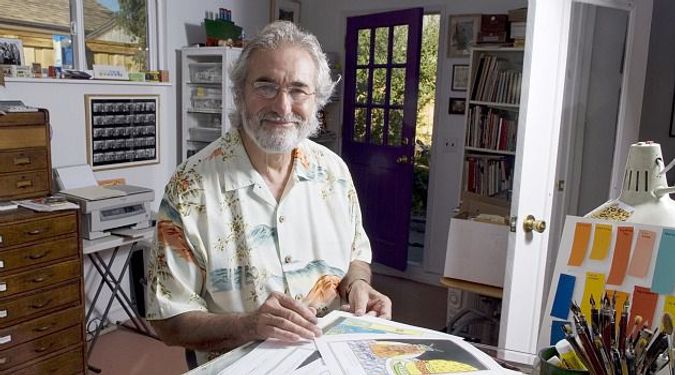 Back in my dating days, there was always a moment of panic when I brought a guy home to my apartment for the first time. I dreaded that (seemingly endless) minute of lingering about, of analyzing and judging — my bookshelf.

I thought about those uncomfortable moments the other day, as I was unpacking my 2-year-old daughter’s books and toys in our new house. Pulling out each title and putting it on her shelf, I considered what each book said about her and about us, and the lessons that could be gleaned from each tale.

Among the most loved books on her shelf are those by Simms Taback and Russell Hoban — two great and wildly popular Jewish children’s book authors who, sadly, died only days apart this December.

While it’s hard to find any commonalities in their work — Hoban didn’t write about explicitly Jewish themes; Taback depicted immigrant life in America — they did have similar backgrounds. Both were from poor Jewish families, born only a few years apart in the Northeast, served in the Army and later worked as art directors, illustrators and teachers.

Each, in his own way, created enduring Jewish children’s literature. I wish similar Jewish books were available for kids these days, but for the most part, I’m disappointed by what I see. The books I come across have only a fraction of the fun and colorful storytelling that are at the core of both these authors’ works.

The reason isn’t a lack of good material. According to children’s author Laurel Snyder, whose books include “Baxter, the Pig Who Wanted To Be Kosher,” it is because the publishing industry is limiting the definition of what Jewish children’s literature looks like by narrowing the scope of what it’s willing to print. “Holiday books are safe, Bible retellings are safe. Anything set in a Polish-looking village or on Delancey Street is safe,” said Synder. “But if you want to write a book that has Jewish values but isn’t rooted in nostalgia, you’re kind of in a no-man’s land.”

Hoban wrote books of all kinds, but he is best known for his series of children’s books about Frances, a precocious badger with a preschooler’s way of seeing the world. His books all teach big lessons, but because those lessons are couched in humor and amusing songs, it’s easy to not even notice. While he spent his later years in London, Hoban was born to Ukrainian Jewish immigrants in Pennsylvania, and his father worked as an advertising manager for the Forward.

By contrast, many of Taback’s books are unabashedly Jewish. His naïve, childlike style employed bright colors, collages, cutouts and visual gags that evoke a colorful shtetl life (think Mark Chagall for the under-seven set). Taback, who grew up in a Yiddish-speaking household in the Bronx, spent decades in advertising and even illustrated the first McDonald’s Happy Meal box before writing his much beloved “Joseph Had a Little Overcoat.”

That tale of Joseph follows a Polish peasant who creates new ways to use his deteriorating overcoat. When the plaid coat gets too shabby, Joseph turns it into a jacket, a vest, a handkerchief and so on, until just one button remains — the idea being that you can always make something out of nothing. The book, an adaptation of a Yiddish folk song, in 2000 earned him a Caldecott Medal — the highest honor in children’s books. (Tucked into the illustrations, readers can even find a minuscule copy of the Yiddish Forward.)

Taback’s books fall squarely within a particular tradition of modern Jewish children’s literature, one that idealizes the life of the shtetl — both in Eastern Europe and in the way it was transplanted to the Lower East Side. The problem, of course, is that these tales tell a very saccharine version of this Jewish story, giving readers almost a wondrous vision of how life was back then, one that leaves out all the hard parts. The other problem with Taback today is a generational one. Not even the great-grandparents remember the Old Country. In his stories, all the bubbes and zaydes sit around speaking Yiddish and dropping tidbits of wisdom over hot bowls of chicken soup. This image won’t exactly resonate with our children, whose own grandparents are more likely to be found on Facebook.

What Hoban and Taback did have in common, however, was their ability to tell great stories. Sure, maybe Taback dipped too far into nostalgia for an Old Country he never knew. And Hoban probably could’ve thrown in a Jewish badger or two. But this kind of good storytelling is what’s missing in the Jewish books I’ve read so far.

The Jewish books we have on our shelf are tales about holidays that read like lessons in Hebrew school — here’s the apple, here’s the honey, this is a menorah, you light it for eight nights. And sure, there’s a place for that. But it also feels like they’re trying too hard, like there’s a smack of desperation: If this book doesn’t teach this kid about Shabbat, who will? What’s missing are great stories in which characters happen to be Jewish.

That’s what I love about Laurel Snyder. Her book has a pig that wants to be kosher. That’s funny! And there’s a female rabbi. That’s modern!

In my ideal vision of things, I’d like to see more Jewish children’s books that manage to teach Jewish lessons with a Jewish sense of humor, that give my kid a sense of community. Let’s not be afraid to be irreverent. Let’s tell great colorful stories with playful language. And let’s hold Jewish children’s books to the same high standards as the rest of the books on our kids’ shelves.