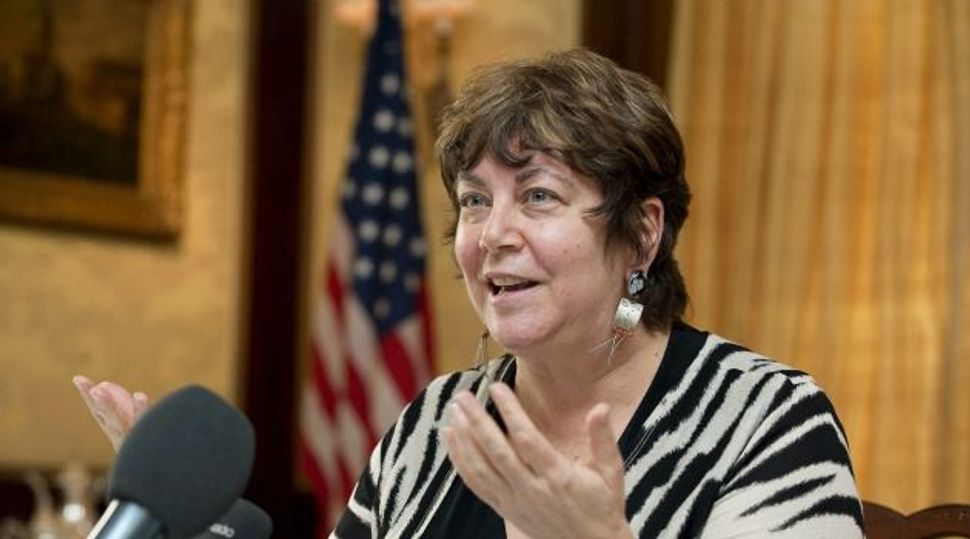 D.C. to Midwest: Hannah Rosenthal, the state department?s top official dealing with anti-Semitism, is preparing to take over the reins at the Milwaukee Jewish federation. Image by getty images

The Milwaukee Jewish Federation is a long way from the State Department’s headquarters in Washington D.C.’s Foggy Bottom neighborhood. But Hannah Rosenthal, who has traveled the world in recent years as America’s top official tasked with combating international anti-Semitism, will soon be moving to the medium-sized Midwest city from the nation’s capital to face a challenge that promises, in its way, to be just as formidable.

In October, Rosenthal will take over as president and CEO of the Milwaukee federation. She has roots in Wisconsin, where she studied, and family in Milwaukee.

The federation, which had revenues of $46 million in 2005, was hit harder than many by the Great Recession. It took in only $7 million in 2009, the year the meltdown in housing really hit home. By 2010, the most recent year for which data are available, the Milwaukee federation’s revenues had climbed up to $19 million.

“We went out searching for somebody that could really lead the community coming from where we were coming from, which is a community that is trying to change,” said the federation board’s chair, Jerry Benjamin, of its decision to hire Rosenthal.

Rosenthal, the U.S. Special Envoy to Monitor and Combat Anti-Semitism, was traveling in Europe in her capacity as special envoy and said via email that she was unable to comment for this story due to time constraints.

The Rosenthal pick could prove to be an edgy one for Milwaukee’s Jewish federation, which serves a small community of 30,000. Though she served as executive director of the Jewish Council for Public Affairs, the national community relations umbrella group for the Jewish community, it was Rosenthal’s ties to leftist Israel-focused activist groups that drew attention when she was named anti-Semitism special envoy in 2009. Rosenthal is a former board member of the dovish Americans for Peace Now and was an adviser to the similarly dovish J Street.

In 2009, after the administration had appointed her but before she had actually begun her work at the State Department, Rosenthal gave an interview to the Israeli daily Haaretz criticizing Israel’s ambassador to the United States, Michael Oren, for declining to attend a J Street conference.

Days earlier, the Forward had reported that Oren had called J Street a “unique problem” in an address to a group of Conservative rabbis.

Establishment Jewish leaders criticized Rosenthal for her critique of an Israeli official at the time. “As an official of the United States government, it is inappropriate for the anti-Semitism envoy to be expressing her personal views on the positions Ambassador Oren has taken,” said Alan Solow, who at that time was chairman of the Conference of Presidents of Major American Jewish Organizations.

Since then, Rosenthal has steered clear of such controversy. Her two and a half years as anti-Semitism envoy have won praise from some who were critical of her in the weeks after her appointment.

“I think she worked hard to establish that anti-Semitism is serious and needs to be dealt with,” Abraham Foxman, the Anti-Defamation League’s national president, said in an interview with the Forward. And though “her style” was not necessarily his own, Foxman said, he deemed her tenure a success.

That style incorporated an unusual personal touch for a special envoy of the United States. “Diplomats aren’t supposed to cry,” Rosenthal wrote in a recent essay posted to her [official Facebook page about a State Department trip to Mannheim, Germany, where her father was a rabbi before the Holocaust. But at a ceremony honoring her father and attended by the city’s mayor, Rosenthal wrote, “all I could do was sob.”

“Hannah is a tireless champion in the fight against anti-Semitism and all forms of hate,” said Michael Posner, assistant secretary of state for democracy, human rights and labor. “Her energetic approach and refreshingly direct style have allowed her to successfully bring the issue of anti-Semitism to the attention of many world leaders.”

Milwaukee federation officials would not disclose Rosenthal’s prospective salary, but her predecessor was paid $262,000 by the federation and related organizations, according to the latest available tax filings from the federation. That’s on the low end of the salaries earned by executives at some of the larger federations.

The federation has just completed what leaders call a “reimagining” process. Over the past two years, the group worked with consultants to talk with community members about the role the federation should play.

“There was a reaffirmation that we wanted federations to be responsible for raising funds to support Jewish life in Milwaukee,” Benjamin said. “But secondly that they wanted the federation to serve as the convener centrally within the community, and when Jews needed to come together we should be responsible to bring them together.”

As part of the “reimagining,” the federation underwent a heavy staff turnover. Benjamin said that fundraising was up since the process began.

According to Benjamin, Rosenthal was enthusiastic about the community-building aspect of the new position. “Milwaukee is a perfect-sized city,” she told The Wisconsin Jewish Chronicle in an interview](http://www.jewishchronicle.org/article.php?article_id=13720). “It’s got a fabulous Jewish community that just went through a process that affirms that it wants to embrace change and make the Federation even better and the Jewish community even better. What more could you want?”

Some in Milwaukee have raised concerns about the hire. Ivan Lang, a professor at the Medical College of Wisconsin and an activist with a group called the Committee for Truth and Justice, has circulated a petition raising questions about the pick.

“This is a sensitive position representing all Jews in Milwaukee, and its polarizing when that person… very strongly favors only one political position,” Lang said, citing Rosenthal’s ties to J Street and the Democratic Party.

So far, Lang said, his petition had 50 signatories.