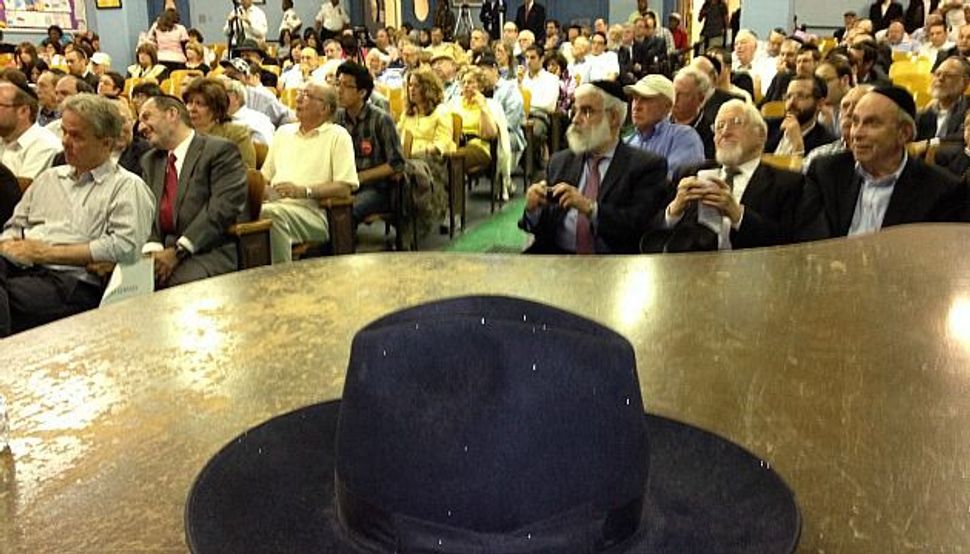 Pander or Principle? New York?s mayoral frontrunners are tripping over themselves to vow more aid for religious schools. With the race up in the air, they want to make sure they get a slice of the Orthodox vote. Image by yermi brenner

Christine Quinn and Anthony Weiner, who lead in the Democratic mayoral polls, both spoke in favor of city aid to for private schools at separate campaign events in early July.

Quinn, addressing a July 11 luncheon hosted by a centrist Orthodox umbrella group, said she would look into providing security guards for private religious schools. Weiner, at another campaign event, proposed boosting the clout of the department within the city’s education bureaucracy dedicated to sending cash to private schools.

“There has been flexibility on both sides of the discussion,” said Michael Tobman, a New York City political consultant who has worked on nonpublic education issues. “The reception has been positive. I think that the [Orthodox] communities care; it matters to these communities to be courted in this way.”

Orthodox advocates have largely abandoned the push for taxpayer-funded vouchers with which parents could pay for religious education. Instead, they are focusing on expanding the subsidies for specific secular services at their schools from federal, state and city agencies.

“If public schools are receiving these types of services, like security for their children and nurses, from our point of view there’s no reason why private school students should be bereft of those services,” said Jeff Leb, New York director of political affairs for the Orthodox Union, the centrist Orthodox umbrella group that hosted Quinn at the July 11 luncheon.

Both Quinn and Weiner have struggled to amass broad support within the Orthodox community. Quinn’s base is in Manhattan, where she enjoys support from non-Orthodox liberal Jews. Weiner, for his part, has little Jewish backing, despite being Jewish.

Yet as Quinn and Weiner have emerged as the dueling favorites in recent weeks, both have stepped up efforts to appeal to the Orthodox.

In response to questions, both said in late June and early July that they believe the West Bank to be disputed territory rather than occupied. The United States, the United Nations, the international community and Israel’s own Supreme Court consider Israel to have occupied the West Bank and East Jerusalem in 1967.

“These shouldn’t be issues for a mayoral race,” Leb said of the candidates’ statements on the West Bank. “It’s nice that they consider it disputed as opposed to occupied, but honestly, I think any real discussion of the West Bank’s status really comes across as pandering a little bit.”

Their pushes on nonpublic school aide, however, have been better received.

Quinn described her positions on aid to private religious schools over sandwich wraps and sushi at a lunch meeting of roughly 40 guests of the O.U.’s advocacy arm. David Greenfield, a Democratic member of the New York City Council representing heavily Orthodox neighborhoods in Brooklyn, introduced Quinn. Greenfield has not endorsed anyone in the mayor’s race.

“She got a very warm reception today,” Greenfield told the Forward.

In a question-and-answer session, Quinn said she would cooperate with the Orthodox community to find more public funding for religious schools. “There are areas, we all know this, where the government cannot get involved in nonpublic education. But then there are areas that we can,” Quinn said when asked whether the city could pay for security guards at private religious schools. “We would like to work with all of you and others to figure that out and see what can be done.”

Weiner’s proposal, made outside a closed Catholic parochial school, was more sweeping. “If you’re a student, no matter what type of school you’re in — a yeshiva, a parochial school, a charter school — you’re entitled under the law to certain specific services that go into your education,” Weiner said, according to the news website Gotham Schools.

If elected mayor, Weiner said, he would promote the head of the city Department of Education’s Non Public Schools office, tasked with apportioning aid to the city’s nonpublic schools, to a cabinet-level position within the department.

The school aid issue represents an area in which it’s politically safe for the candidates — both of whom are progressive Democrats — to cater to the interests of the Orthodox community.

“On a lot of social issues, candidates in the Democratic primary just don’t have much to agree on with New York City’s faith communities,” Tobman said. “So you look for areas where you can agree.”

For the Orthodox community, private school education is a top political and social issue.

“There are no more important things in life, to the Orthodox community, than children and Jewish education,” wrote Avi Shafran, a spokesman for the ultra-Orthodox umbrella group Agudath Israel of America, in an email. “And with much of the community under great financial pressure (both due to the costs of Jewish observance and the economy’s general state), the obtaining of legally permissible aid to Jewish schools is a top agenda item for the community.”

How that issue will translate into votes remains to be seen. Ultra-Orthodox voters in Brooklyn generally vote in blocs, and those blocs currently seem to be committed to Bill Thompson, the former comptroller with strong ties to the Orthodox.

Bill de Blasio, who is popular with liberal non-Orthodox Jews, made what appeared to be his own pitch to Jewish voters in a July 12 letter sent in his capacity as New York City’s public advocate. In the letter, de Blasio asked Saudi Arabian Airlines to end its practice of barring Israelis from buying tickets on the airline at New York’s John F. Kennedy Airport.