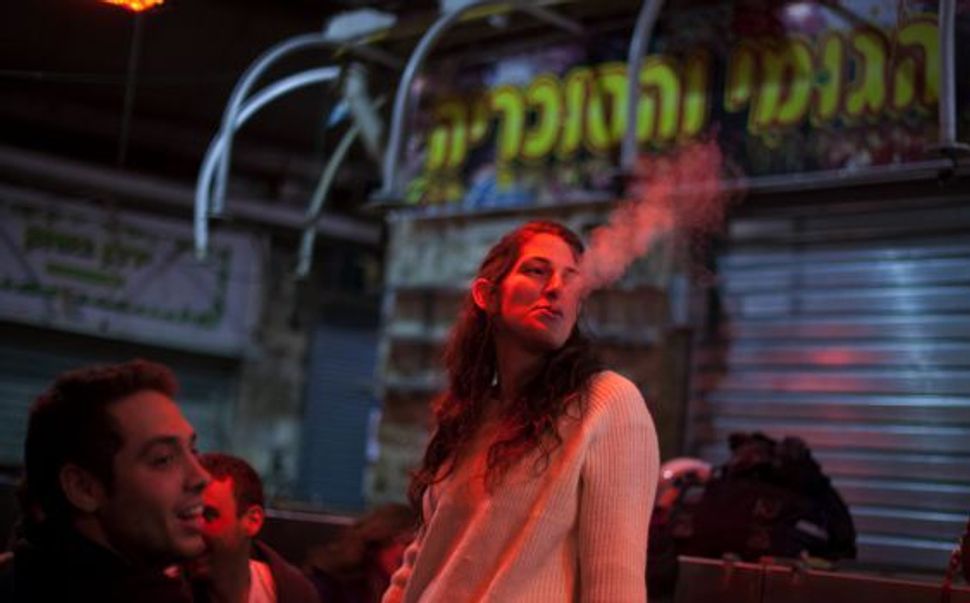 Blowing Smoke: A woman smokes a cigarette in the Mahane Yehuda market in Jerusalem. Image by Getty Images

I smoked my first cigarette in Israel, the land of milk, honey and Marlboro Reds. I was 10 years old and stretching my almost-tween freedom. There was something so effortlessly cool about it all, the way people smoked on the beach in between dips into the crystal-clear, blue water. Or how soldiers at the bus stop would share a cigarette between them like some sort of secret club initiation. Or the hypnotizing curl of smoke that would unwind around my Israeli uncle as he slowly sipped his coffee between puffs.

These scenes were very far removed from my suburban New England upbringing, where cigarette smoking was admonished and cigarettes never seen. Back in Connecticut, anti-smoking campaigns ruled the late ’80s, and pictures of black, decayed lungs were enough to keep me far away from Joe Camel. But in Israel? It seemed like everyone was smoking, and the stubborn kid in me needed to see what the hype was about, necrotic lungs be damned!

It was a week or so into our family trip when I watched my uncle flick his cigarette onto the walkway before he let himself into the apartment. I checked to make sure nobody was looking, and then sprinted toward it. I carefully cradled it in the palm of my hand, not wanting to burn myself, but clearly aware that if I let it snuff out, I’d be out of luck. I entered the stairwell, and after reassuring myself that nobody was heading in my direction, I placed the still smoldering cigarette to my lips.

I inhaled again, this time taking in as much as I could. My lips brushed against the dry, cottonlike filter as biting smoke filled my lungs, leaving a sharp, stinging sensation in its wake.

This one hit me good, and I staggered back like I’d been punched. My chest squeezed tight, and I started wheezing. My heart beat fast, almost too quickly, and I felt dizzy. It was exhilarating and terrifying all at once. Is this what it felt like to be a grown-up? I was all in, but then realized I would be in a hell of a lot of trouble if my parents found out.

I gave myself a few more minutes, and eventually started feeling normal again. My head had stopped feeling cloudy, and despite my racing pulse, I rushed up five flights of stairs to my grandparents’ apartment, ignoring shouts of greeting until I was locked behind the bathroom door. I had to destroy all evidence of my crime. I washed my hands three times, convinced I could still detect the acrid stench beneath my chewed nails.

In the end, nobody was the wiser, and if my parents knew something was up with their squirrely 10-year-old, they never said anything. Later, in college, I realized that, whoa, there are people in America who smoke. They had just been hiding out in Econ 101.

I’ve been back to Israel multiple times since then, and I recently returned for the first time with my own child. My son is almost 8, and he instantly fell in love with the country. He also seemed to notice, much like his mother almost 25 years prior, how prevalent the smoking culture is there. But this time around, neither of us was enamored of it.

While at first all I saw were attractive adults and swirls of gray smoke, now it all felt rather depressing. The free ashtrays that are kindly offered at city beaches don’t seem to stem the tidal waves of cigarette butts buried in the sand alongside seashells. Despite recent efforts like a strict 2012 anti-smoking law that bans smokers from lighting up in various public places, such as bus stops and train stations — complete with hefty fines — I still saw plenty of people puffing away in public. And I’ve seen friends and relatives deal with real-life health issues that crush any notion of perceived chicness.

“But don’t they know they won’t have as much breath to swim and run?” my son asked me as we walked down the Tel Aviv beach. Hours later he held up a lollipop stick to his lips and pretended to smoke, much to my chagrin.

I became the concerned old lady as I watched packs of children — they couldn’t have been more than 14 or 15 — smoke cigarettes at the bus stop. I wanted to ask where their parents were, but they were probably off smoking, too.

I’ve since discovered that a few other friends have had their first experience with Big Tobacco while in the Holy Land. Some were there on a youth-group-led trip while in college; others had been visiting friends and family, like I was. All these people were older than 10, but they felt similarly about the seeming omnipresence of smoldering cigarettes. And like me, upon returning to the states, none of them became a life-long smoker.

I’m still not quite sure what it is about Israelis and cigarettes. It’s clearly a part of their culture, and perhaps reflects the culture of the region, too: Smoking is huge in the Arab world. I still remember staring in awe at a claw-machine game near the Tel Aviv bus station. Instead of stuffed toys or plushy balls, the prizes were boxes of Marlboros. Today I no longer want to play the game. I hope that my son feels the same way and manages to escape the allure the next time we visit, or at least holds out longer than I did.

Avital Norman Nathman is a freelance writer whose work has been featured in the New York Times, CNN, Bitch Magazine, Cosmopolitan.com and more. She is the editor of the 2014 Seal Press anthology, The Good Mother Myth.