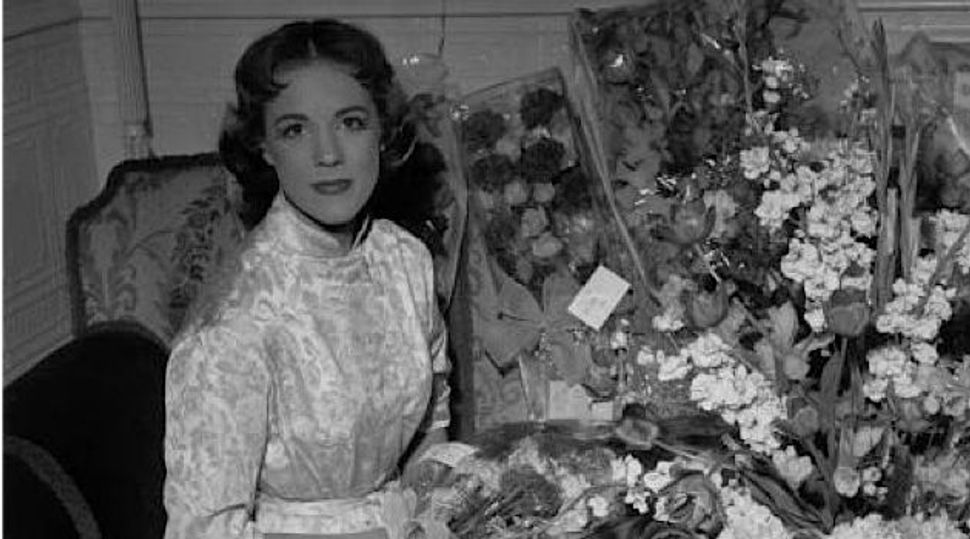 She ‘ad a ‘ard Time: Julia Andrews backstage after playing Eliza Dolittle, whose Cockney accent had something in common with spoken Hebrew. Image by Getty Images

The New York Times, which no one could accuse of being overly sympathetic to Israel, has hit a new linguistic low. In a September 3 report from the Erez checkpoint between Israel and Gaza, Times reporter Jodi Rudoren quotes an Israeli official as telling her that “this is a secret crossing — this is Gaza, this is Hamas, this is animal.” To which Rudoren adds that the official “said by way of explanation afterward, in halting English, ‘This is not a normal crossing.’”

Rudoren can perhaps be excused for not figuring out that “secret” was the official’s English stab at “high-security.” (There is nothing secret about Erez.) But there is no excuse for her turning his attempt to say “abnormal” (he clearly spoke French better than English, and was thinking of French anormal) into “animal.” Either she was not intelligent enough to realize what he was trying to say, in which case she should be reporting on traffic accidents in Weehawken, not on events in Israel, or else she was deliberately distorting it. The same can be said for the editors of The Times who okayed what she wrote. At a time when Israel is routinely smeared with the calumny of “racism,” a newspaper’s falsely quoting an Israeli official as calling Gazans “animals” is despicable.

Yet the Forward, I’m sorry to say, would be in no position to cast stones if it wanted to cast them. A tendentious front-page article by Gon Ben-Ari in its September 5 issue, titled “How Gaza Changed Hebrew in Israel,” is riddled with errors.

Ben-Ari has a thesis: “Israeli Hebrew is a new language [whose] malleability makes it even more open to manipulation than other languages” — and the Israeli public, he believes, was manipulated by its government’s and media’s use of language during the fighting in Gaza. Yet though spoken Israeli Hebrew is indeed barely 100 years old, this does not make it any easier to “manipulate,” nor do Ben-Ari’s examples of such “manipulation” stand up to even casual scrutiny.

Take his citing the frequent description of the Gaza fighting by means of the word mivtsa, “operation,” rather than milḥ ama, “war,” as a purported attempt to play down the scale of the conflict and make it more palatable. In doing this, he gets three things wrong. The first is saying that mivtsa derives either from an Arabic word for “merchandise” that he garbles (it’s beda’a, not, as he would have it, bcha’a) or else from the biblical noun betsa, “illicit profit”; in fact, it comes from the biblical verb l’vatse’a, to perform or undertake. The second is his claiming that mivtsa in modern Hebrew can only mean a clearance sale or military operation when it can, in reality, denote a concerted undertaking of any kind, from a rescue mission to cleaning out the basement. The third is contending that mivtsa meaning a military operation is professional “military dialect.” True, the Israel Defense Forces, like other armies, does code-name its campaigns Operation This or Operation That, but these names have been accepted and freely used by all Israelis since Israel’s 1948 War of Independence. The 1956 Sinai Campaign, for example, is still sometimes publicly referred to in Israel by its code name of Mivtza Kadesh.

There is no “manipulation” in any of this, just as there is, contrary to Ben-Ari’s assertion, no “militarization” of Israeli Hebrew in the use of the everyday verb l’hitakel b’, “to run into [someone or something],” to also mean to engage in combat. (This verb is consistently misspelled by Ben-Ari as l’itakel, and in transcribing other Hebrew words, too, he regularly drops their h’s, Cockney-style. Though this is indeed how some Israelis pronounce them, spelling them this way in a newspaper is akin to publishing a headline saying, “U.S. Calls for Eavy Sanctions on Russia.”) Maintaining, as Ben-Ari does, that l’hitakel “wasn’t used to describe Israel Defense Forces combat situations until 2004” is wildly off base. Both it and its noun hitaklut, in the sense of making contact with enemy forces, were already being regularly used when I did my basic training in the IDF in 1974.

Still another instance that Ben-Ari points to is the difference between Israel having called Ron Arad, the Israeli navigator who disappeared after being shot down over Lebanon in 1986, a ḥ ayal shavuy or “captured soldier” while calling Gilad Shalit, taken prisoner by Hamas in 2006, and Hadar Goldin, killed and his body snatched in the recent fighting, ḥ ayalim ḥ atufim, “abducted soldiers.” Ben-Ari seems to think this reflects an Israeli media trend to delegitimize legitimate wartime actions performed by the enemy, but this is absurd. Arad was on a bombing mission, an act of war by any criterion. Shalit was taken prisoner without provocation while on a routine patrol on the Israeli side of the Israel-Gaza frontier, and Goldin was the victim of Hamas flagrantly breaking a cease-fire agreement to raid an Israeli position. Both were seized in violation of the rules of war and were therefore “abducted” rather than “captured.” There’s no “manipulation” here, either.

Space prevents me from listing more mistakes in Ben-Ari’s piece. It’s not only open season on Israel these days, it’s apparently open season on the Hebrew language, too. You can say anything about either and expect to get away with it — even in the pages of a Jewish newspaper.