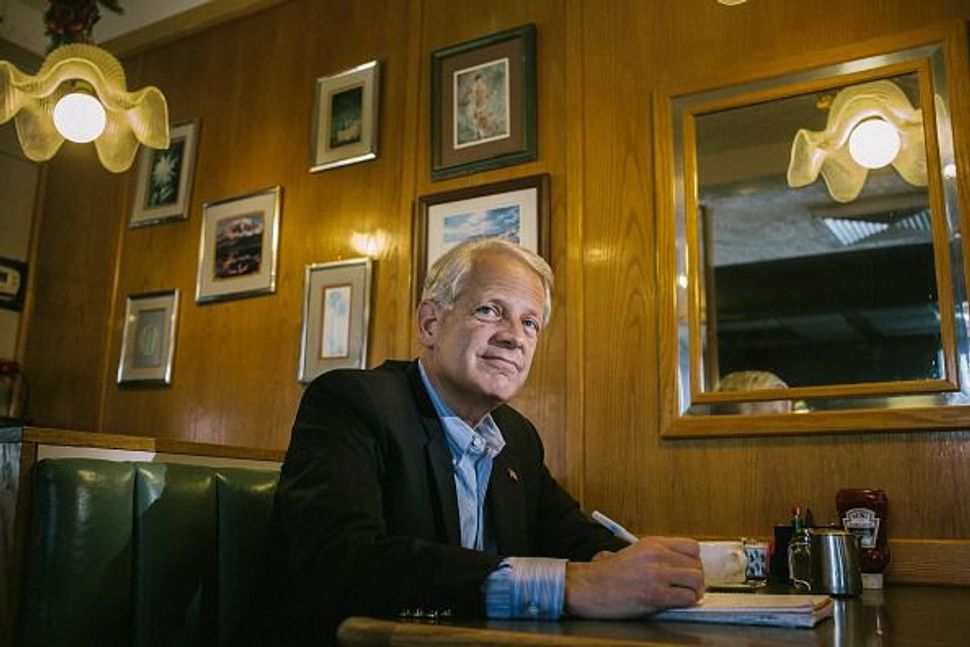 Since announcing his plans to retire from Congress, New York Democrat Steve Israel, one of his party’s chief fundraisers, has been megaphoning his hatred of the role that big money and major donors play in American democracy. But in an exit interview with the Forward, the Long Island lawmaker says money in support of Israel (the country) was one form of campaign funding to which he never objected.

“Not for me,” Israel said when asked if campaign finance money from supporters of the country was ever a problem for him. “Before I came to Congress I was a pro-Israeli activist.”

The congressman explained that pro-Israeli lobbying and the money tied to it are different in his eyes from lobbying carried out by those representing groups such as the gun lobby or the oil industry.

Israel has been among the strongest pro-Israel voices in the House of Representatives. This past summer, at the height of the debate over the nuclear deal with Iran, Israel sided with the American Israel Public Affairs Committee and with Prime Minister Benjamin Netanyahu’s government in opposition to the deal, a decision that was viewed as a major achievement for the anti-agreement camp. (The agreement nevertheless went through.)

According to his own count, Israel, an eight-term New York Democrat, spent 4,200 hours on the phone with donors and attended more than 1,600 fundraisers, events he described in a New York Times column published shortly after his January 5 announcement that he will not seek re-election as “panhandling with hors d’oeuvres.”

Now, unlike many of his fellow congressmen who have taken on second, more lucrative careers as lobbyists after retiring from Congress, Israel said he will not move on to a K Street company or to a lucrative D.C. law firm. Instead, he plans to take his battle against big money in politics to the literary realm, where the already published author plans to publish his second novel, a satire of the powerful gun lobby.

In his scathing New York Times attack on the political funding system, which was titled “Steve Israel: Confessions of a Congressman” Israel openly describes how he endlessly chased after contributions, both for his own campaign and for those of fellow Democrats, and how super PACs willing to put up enormous amounts of cash have taken over politics.

“This isn’t ‘Shark Tank,’” he wrote. “This is your democracy. But as the bidding grows higher, your voice gets lower. You’re simply priced out of the marketplace of ideas. That is, unless you are one of the ultra wealthy.”

Israel later told the Forward he feels that the influence of interest groups and the proliferation of super PACs “are distorting democracy.”

Though he’s not one of the top recipients of political contributions from pro-Israel groups, Israel has received sizable donations from these groups throughout his years in Congress. He was considered a safe pro-vote for the Jewish state and was close to AIPAC. But he was also among the few members of Congress to agree to sit on the host committee for the inaugural conference of J Street, the dovish pro-Israel lobby.

While insisting he sees no problem with pro-Israel campaign funding, Israel did decry what he views as attempts by Republicans to claim exclusive ownership of the pro-Israel issue. “I resent when Republicans, some of whom couldn’t put Israel on a map, suddenly use Israel as a partisan political football,” he said. “Israel is not a partisan football to be used continuously for fundraising purposes, it is the Jewish state that ought to be deeply respected by everyone in Congress.”

After making his decision to oppose the Iran deal, an issue that split Jewish Democrats in Congress, Israel got a call from President Obama, who personally worked the phones to convince members to back the agreement. “The feeling that I expressed that was most persuasive to him was: ‘Mr. President, this is just in my DNA; not political. This is just who I am.’ And on that he said: ‘I respect that. Fair enough,’” Israel recalled.

But now, as the nuclear agreement moves toward full implementation, Israel sees no sense in continuing to fight it. “I don’t think it’s helpful for this deal to be the new Affordable Care Act,” he said, noting the endless “futile repeal attempts” to which it has been subjected by GOP lawmakers. “We’ve got to get beyond the politics and instead focus on the most important issue and the additional support and technologies that Israel needs to [ensure] its qualitative military edge,” he said.

The congressman, who is 57 years old, grew up in a Jewish family on Long Island. One of his first jobs after graduate school was as Suffolk County director of the American Jewish Congress. He was first elected to Congress in 2000, after the retirement of Rep. Rick Lazio. Since then, Israel has easily won all re-election bids in his distinctly Democratic-leaning district.

Israel is one of 19 Jewish members of the House of Representatives, 18 Democratic and one Republican. In the Senate there are currently 10 Jewish members, but one, California’s Barbara Boxer, has already announced her decision to retire at the end of this term. The number of Jewish members in both chambers has been in decline for several years, since a high of more than 40 altogether a decade ago.

Above Israel’s desk in his congressional office hang the citizenship papers of two of his Jewish grandparents who fled Russia.